The day Kareem Abdul-Jabbar asked his hero, Bill Russell, for an autograph 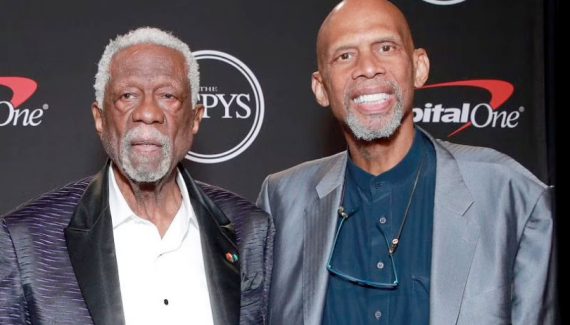 A legendary quartet around the same table. In 2014, Bill Russell, Kareem Abdul-Jabbar, Magic Johnson et Larry Bird are reunited during the filming of an advertisement for AT&T.

The first was then 80 years old, the second 67. The atmosphere between these tenors of basketball was so good that day that “KAJ” thought it was the right time to take action. And fulfill a very dear and old personal wish: to obtain the autograph of the legend of the Celtics. He’s had that in mind… for more than 50 years.

Bill Russell is there, seated, sipping his coffee, between takes. A smiling “KAJ” approaches him without the latter suspecting anything. ” Hey, Bill. I was wondering if you could do me a favor. “The former Lakers player has planned everything: he takes out a felt hat and a Celtics jersey. Number 6.” Can you sign me an autograph? The octogenarian looks at the other for a long time then signs the jersey. ” Merci. » « You’re welcome my little one “retorts the man with 11 championship titles.

« He had continued to call me small since our first meeting, when I was fourteen. I think it was his caring way of reminding me that he was there first and that I would always walk in his giant steps. “, Develops Kareem Abdul-Jabbar in a text written in tribute to the Hall of Famer, who died on July 31. Write a few lines on Twitter to greet ” [s]we friend, [s]on mentor, [s]we model was not enough. “KAJ” meant more about her closeness to Bill. The man who gave him learned to be bigger, as a player and as a man ».

A rather cold first meeting

Their first meeting therefore dates from 1961. Aged 27, the Celtics player is only halfway through his career and his domination of the league. The Celtics, who have just achieved the hat-trick, train that day in the gymnasium of Power Memorial High School, an establishment frequented by Lewis Alcindor Jr. NBA teams come to work there because the room is located close to Madison Square Garden.

« As I walked into the gymnasium, I saw Bill Russell sitting nonchalantly in the stands reading The New York Times. The Secretary of Defense himself. my personal hero “recalls Kareem Abdul-Jabbar. His coach at the time, Jack Donahue, talks with Red Auerbach, who will also return to the pantheon with the Celtics. The first asks Lew to get closer. ” Hey, Bill, come over here. I want you to see this kid “, continues Red Auerbach.

« Bill Russell lowered his newspaper and looked at me with a frown. Then he growled, ‘I’m not going to get up just to see a kid.’ “The kid in question, who no longer knows where to stand and wants to run to take refuge at home, nevertheless has a sizeable argument to make: from the top of his 2.13 meters, he is already taller than the giant of the Celtics ! ” Don’t let it get to you, kid. Sometimes he can be a real grump “, tries to reassure Red Auerbach by pulling the youngster by the wrist to meet the NBA player. ” Bill, be nice. He’s the kid who could be the next Bill Russell. »

Despite the politeness, and the shyness, displayed by Lewis Alcindor Jr, Celtic are not going to smile or be particularly friendly. This is how the one who will also be called upon to dominate the NBA rackets met his ” childhood hero ».

« They say you should never meet your heroes. That it is often disappointing or discouraging. But that has not been my experience. I was delighted. He spoke to me. And I thought I saw in his eyes the recognition of someone, like him, who had a deep, intense and radiant passion for the game. Or maybe that’s what I wanted to see. Either way, it made me try to be more like him. »

As he describes in detail in his text, Bill Russell, whom “KAJ” tried to make interview after interview laugh, first inspired him on the court. ” I continued to study Bill Russell as Oppenheimer studied Einstein “, he formulates, stopping without surprise on their common domination in defense.

This inspiration has thus exceeded the limits of the field. ” I always knew I wanted to be active in the field of civil rights, but I didn’t always know how to go about it. “, says the man with 19 All-Star selections who remembers the “Cleveland Summit”, the gathering of a group of black athletes, organized in 1967 in Cleveland, around Mohamed Ali who refused to be drafted into the US Army.

« Bill was the most famous member of the summit, besides Jim Brown (note: American football player) and Ali, but he never tried to use it to influence the rest of us. His approach was logical and unbiased, encouraging us to listen with an open mind to what Ali had to say. It was a great lesson in humility and leadership that guided me for many years. The Bill Russell from the top of Cleveland was the one I wanted to be when I grew up, the one who made me grow at that exact moment. », raconte Karrem Abdul-Jabbar.

He ends: Years later, when some in the press tried to portray me simply as an angry black man, I tried to follow Bill’s rational example, stay calm and join the fight by advocating for specific solutions. rather than getting angry and shaking my fist. Although, sometimes frustrations call for a good punch. As Bill taught me, you have to get back to real work that actually brings about change. »