New coach of La Charité basket, Guy Arnaud shapes his group before the resumption of NM2: “I want to value everyone’s work” 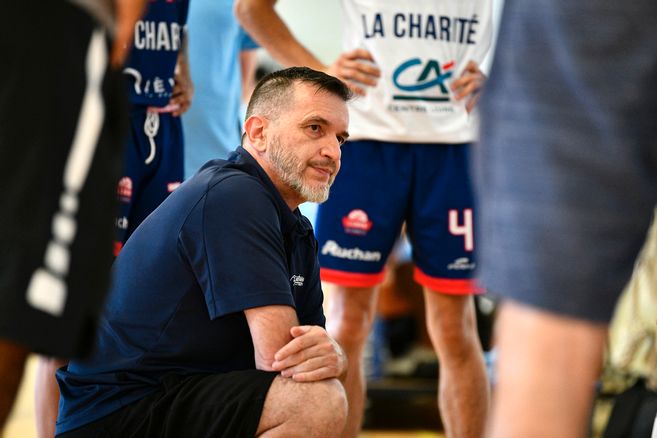 Arrived in the off-season, replacing Fabien Anthonioz, who left for Lons-le-Saunier (NM2), the new conductor of La Charité, Guy Arnaud, has been on assignment since the resumption of training, there are three weeks, for the mayonnaise to set.

“I want to take advantage of the pre-season to bring out a dynamic in this team. We won’t have the most talented team, but we will put a lot of energy and goodwill into it. This seems essential to me for a team that had descended sportingly. »

Saturday August 27, in Marzy, and despite the defeat (66-72 after extra time), La Charité added deeds to words against the Espoirs de la JA Vichy-Clermont. “My team is driven by an excellent state of mind. And I think it was seen, against a bigger, stronger, more athletic, more talented opponent, ”underlines Guy Arnaud, who does not hesitate to give of himself during training exercises. “The players adhered to the work put in place. »

By landing at La Charité, the coach also brought his vision of managing a workforce. “What matters is to value everyone’s work. When a player trains very hard, but does not play, it is a source of inhibition. I do not play someone because it is a priori more referenced. The reality is the field. And your level, that of your last match, ”notes Guy Arnaud, attentive.

“During the preparation matches, either you emerge and gain playing time, or you display limits that we had not anticipated. »
Attached to his “open door system”, which should allow everyone to seize their chance, Guy Arnaud should still register two recruits, leading and inside.

“We have changed the way we recruit. On catalog, it’s over. We don’t want to form an opinion on a five-minute video. We prefer to invite the players over a few days, to work with them, so that they can discover the city. It’s the best formula, ”appreciates the Charitois coach.

Ville. “I haven’t had time to take advantage of La Charité yet. I enter the room, I leave the room, I prepare the training sessions, the matches. But I guess a warm city. I am from Saint-Chamond, it reminds me of “my” Loire”, smiles Guy Arnaud.