It was lost for 60 years and appeared in the least expected place: the incredible story of the only piece that remains of the first World Cup trophy 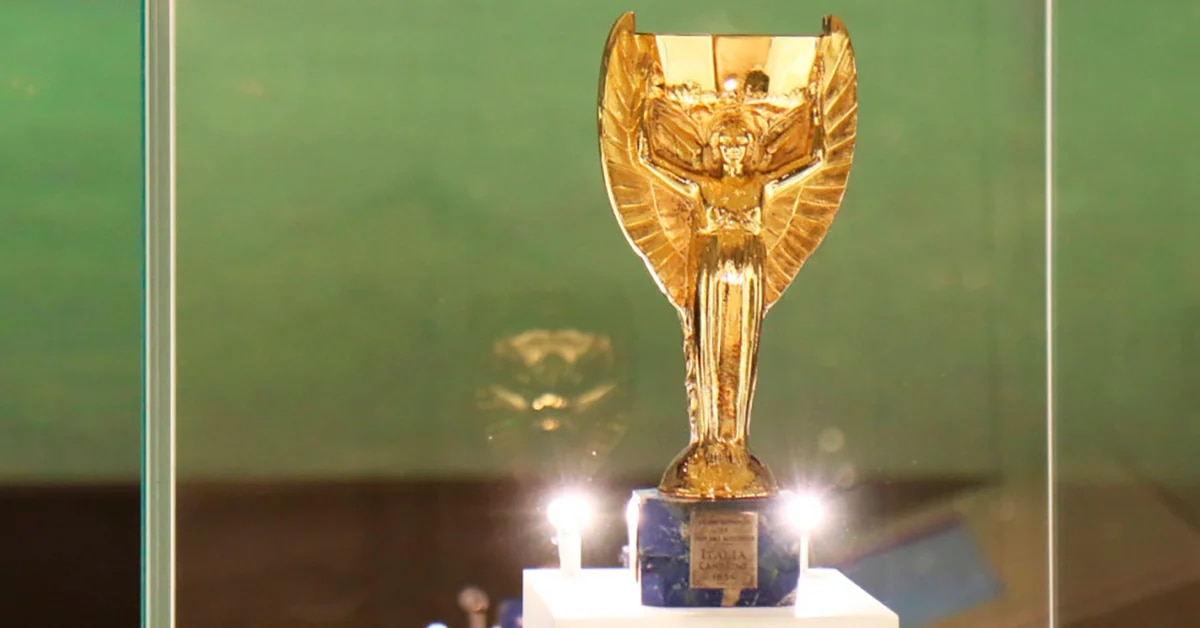 A replica of the trophy, with its original base, at the FIFA Museum in Zurich (FIFA Museum)

It came to be listed as one of the 10 greatest lost treasures of humanity: the Jules Rimetthe first trophy awarded by the Soccer World Cupit seems cursed. It was stolen twice and the official version is that it ended up being melted down after its disappearance, although there are versions that it actually entered the wheel of illegal art trafficking never to come out again. Whether it was one or the other his destiny, he disappeared from the sight of the fans and the showcases of the Brazilian Confederation, which had kept him after the first three stars achieved by Verdeamarela. However, a piece of that work, which was believed lost for 60 years, lives in the FIFA Museum as a proud testimony of those beginnings of the ecumenical contest. And, like a clever old-fashioned wing, he hid for more than half a century from his pursuers in the least expected place.

The story was revealed by the Zurich-based Museum itself. The Jules Rimet Trophy was a sculpture by Abel Lafleur representing Nike (the Greek goddess of victory). The French artist was in charge of creating the medals for the French tournaments, and Rimet himself, then head of FIFA, entrusted him with the award for the first World Cup. Its value was estimated at around 50,000 francsmeasured 30 centimeters, weighed almost four kilos and was gold plated. It stood on a four-sided lapis lazuli stone base.

For 40 years, from the baptismal event in Uruguay 1930 to Mexico 1970, the Federation awarded this trophy, despite the turbulence suffered. During World War II, for example, rumors grew that the Nazis had him in their sights to kidnap him. In fact, the leader Ottorino Barassi hid it in a shoebox under his bed. And in England 1966, indeed, he disappeared, and a dog, Pickles, who gained worldwide fame for his services to the beautiful game, had to come to the rescue.

While it was exhibited in the Central Hall Westminster, the guard who guarded it left Jules Rimet unprotected for a few minutes to go get a coffee, enough time for him to be removed from the display case. When Scotland Yard burned with public ridicule, the citizen David Corbett took his dog for a walk like any other day, which detected a half-buried package. It was the trophy, in perfect condition and, months later, it would be handed over to the locals after winning their only World Cup title. 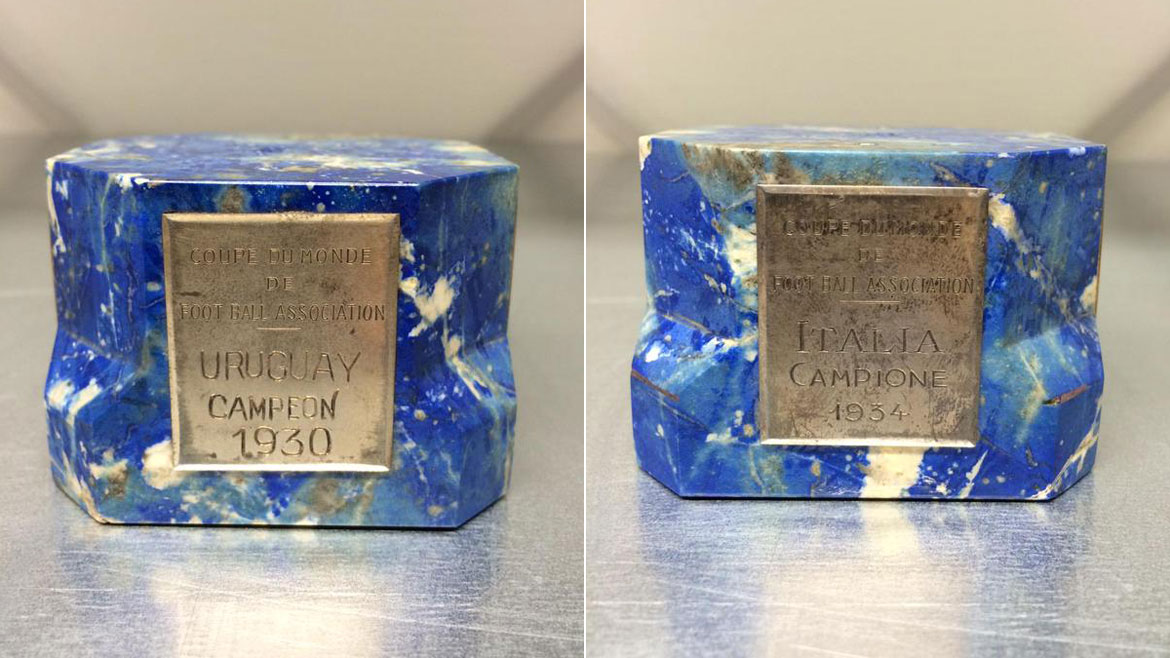 The original base of the trophy, in detail

But before the 1958 edition, developed in Sweden, the statuette had already changed, a fact that triggered different speculations and theories: since it had been damaged and passed through the “workshop” until it had been lost and it was a copy. Indeed, after the German title in 1954 after violating the legendary Hungarian team of Puskas, a replica had been commissioned in the city of Hanau. However, it was not the one that was subsequently delivered to the Brazil of rising star Pelé.

Then the known. In 1983, when he was already resting from his trip to Brazil, it was stolen from the armored window of the Brazilian Football Confederation headquarters in Rio de Janeiro: a small detail, the windows were bulletproof, but the structure was precariously attached to the wall with tape and wood, something that was noticed by the thieves.

The official version indicates that the trophy was cut into pieces in the jewelry store of Argentine Juan Carlos Hernández, who then melted it down to sell the gold for $15,500. Too little for the size of the milestone of history, and for the experience of the reducer, with contacts in the underground world of art. Hence the doubts about whether the explanation of the Brazilian Justice adjusts to the reality of the facts. 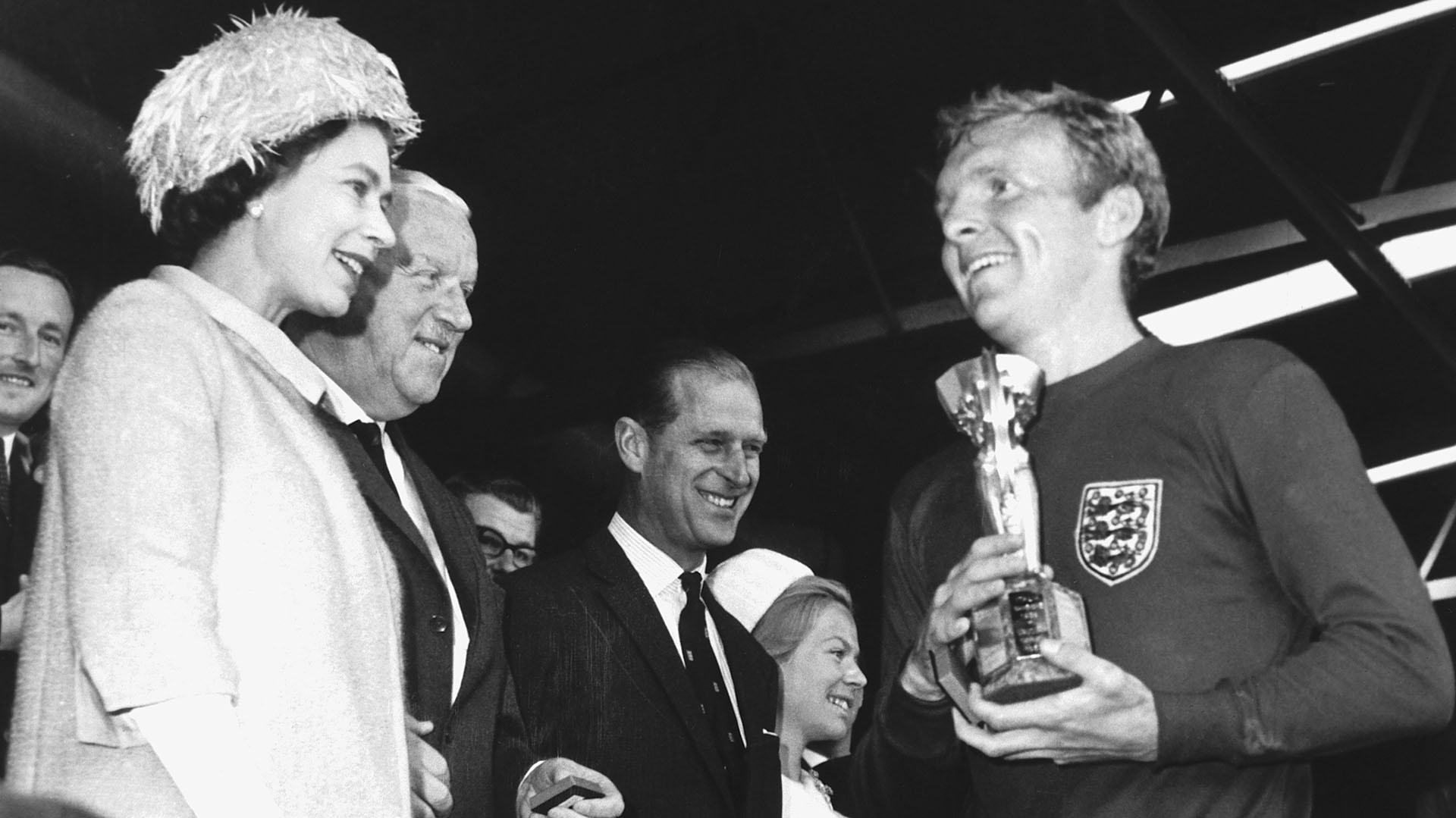 Bobby Moore receives the trophy after England’s 1966 win. The base, pictured above, is already different (Hulton-Deutsch Collection/CORBIS/Corbis via Getty Images)

But the trophy, or at least a part of it, began to be resurrected in 2013, when FIFA planned its museum. Those who shouldered the project embarked on investigating the myths and truths regarding the busy life of Jules Rimet. The various photos of the trophy led the curators to “a remarkable discovery”, as FIFA calls it.

“The story focused on the base of lapis lazuli. In 1954, West German captain Fritz Walter became the fifth captain to lift the World Cup, but when the team arrived at their new home, they realized there were only four sides to the base. As each side had a plate with only one winner, there was no place to add the West German one.was the mess they found, according to the account of those in charge of the Museum.

“The trophy that appeared in 1958 seemed taller. That was because Abel Lafleur’s original base had been replaced with a larger one, also made of lapis lazuli, but with eight sides. The name of the statuette appeared on the front, which left seven plates on the other sides, each with space for two winners, expanding its capacity to incorporate winners until the 1994 edition, if it had not been decided that it would remain in the hands of Brazil. After three titles obtained, in 1970″, he discovered the body of researchers. 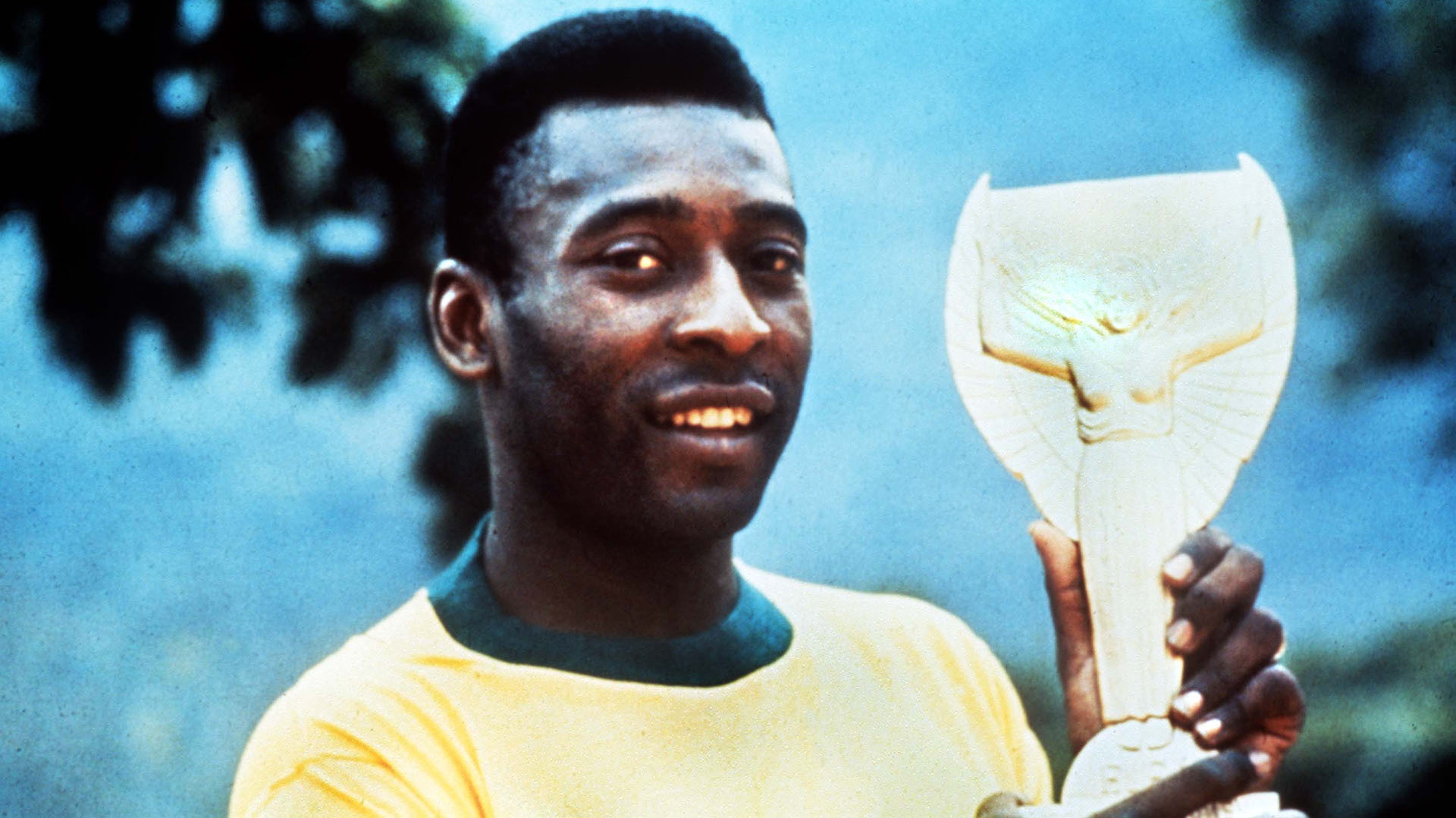 Pele and the Jules Rimet Trophy. After three conquests, Brazil exhibited it at the Confederation headquarters in Rio de Janeiro. From there he was definitely stolen (The Grosby Group)

And the original base? Here is the unknown. In the middle, FIFA had moved offices three times, and the fear was that in one of those changes it had gotten lost. The epilogue of the story did not live up to the intrigue it generated. “The truth is usually less dramatic,” they indicated from the entity that governs soccer at a planetary level. The four-sided base has never moved from a shelf in the organization’s archives, unlabeled, thus invisible to less trained eyes.. In fact, there was not even a formal record of the change of pedestal in 1958.

The story was lost, undocumented, for 60 years. Although it resurfaced from the darkness of a file, unscathed by the thefts and incidents of the rest of the award. While the current World Cup, the best known, that of the two golden human figures, holding the planet earth, continues its tour, changing hands every four years, the Jules Rimet trophy, or the copy mounted on the original base, smiles from his corner in the Museum, a silent witness to the climax of the most popular sport.

The unusual robberies of the World Cup: a dog, an Argentine jewel reducer and the mystery that endures
Myths and truths of the Qatar 2022 World Cup album: the difficult figure, the method to complete it and how the “summoned” are chosen
Facebook
Pinterest
Twitter
LinkedIn
Email

Djokovic, ambitious after Tel Aviv: “My goal is to win tournaments wherever I am”

Affair scandal in the NBA: will the coach never get a job again because he loves the wrong person? Astrid Barría set the National record in Archery in Asunción