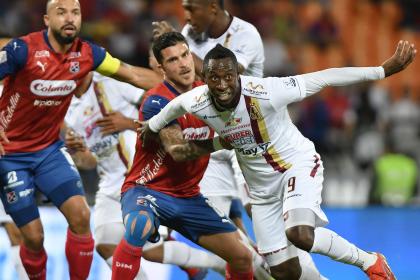 Deportivo Independiente Medellín must endure at home the favorable result it achieved in Ibagué in the first leg of the BetPlay Cup quarterfinals. While Deportes Tolima needs to come back from that tough 1-3 they did not expect at home. David González lined up a team with Daniel Torres and Jordy Monroy who will make their debut. For his part, Hernán Torres cannot have center forwards due to injuries to Juan Fernando Caicedo and Michael Rangel. Nominally, Luis Fernando Miranda appears in that position.

8′ Medellín infringement on Rodrigo Ureña on the edge of the area.

6 & # 39; Incredible Andrés Mosquera! Great pass from Eduardo Sosa to Luis Miranda who stands against Mosquera and saves with his feet.

5′ Keep trying Tolima down the left wing. Junior Hernández with a center secured by Andrés Mosquera.

4′ Deportes Tolima has the initiative attacking on the wings with centers looking for Luis Fernando Miranda who appears as number nine.

Medellín to maintain the aggregate result or expand it, Tolima to leave everything on the field to overcome the series if they want to qualify for the semifinals of the BetPlay Cup.

The protocol acts sound at the Atanasio Girardot.