European Athletics Championships: The lessons of the gold rush 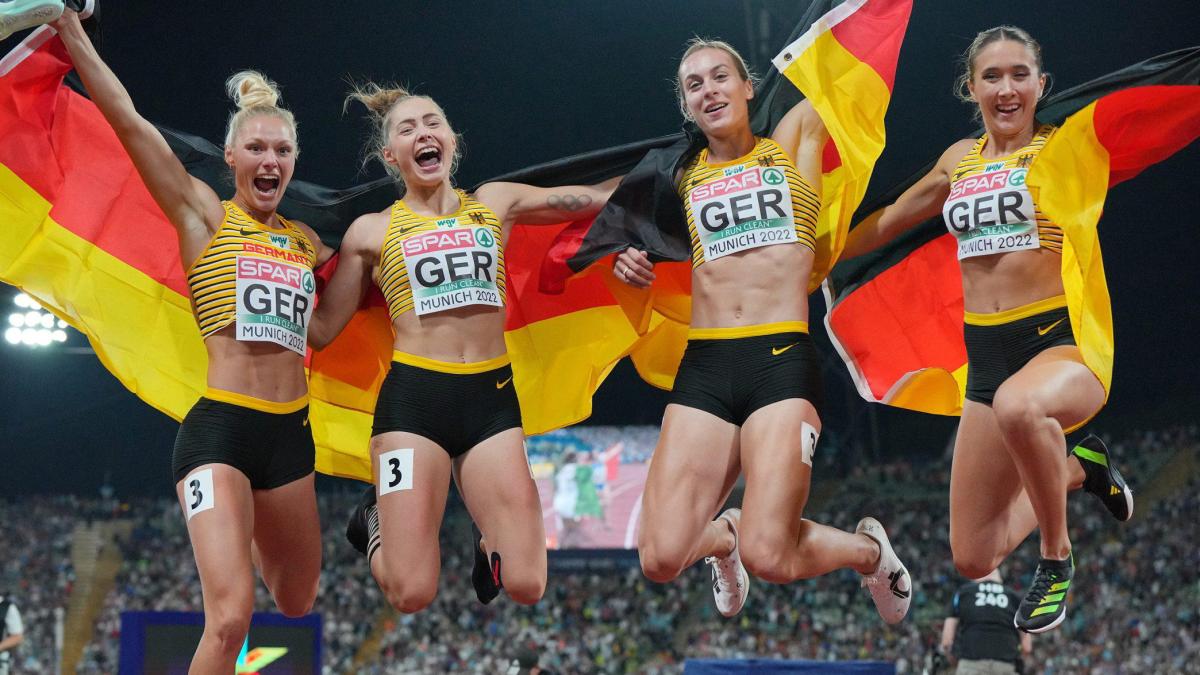 WThe spectacular finale of these continental title fights was excellent to read from a German athlete. Sprinter Alexandra Burghardt leads something like a sporty double life. Six months ago she was still working as a brakewoman at the Olympic Winter Games in Beijing and won silver there with pilot Mariama Jamanka in the two-man bobsleigh.

Now she has returned to her beloved athletics track and first achieved relay bronze at the World Championships four weeks ago. What was missing was the really big coup: And the 28-year-old from Upper Bavaria finally succeeded on the final day of the European Championships in Munich: As the starting runner of the German quartet, Burghardt laid the foundation for victory over 4 x 100 meters and thus completed her medal set this year . “It’s really like a fairy tale,” she said afterwards. “That was the best advertising we could do for our sport.”

In fact, the title fights in their own country turned into a big image campaign. With 16 medals won (including seven gold), the German team not only led the ranking ahead of Great Britain and Spain. In front of an average of around 40,000 fans in the Olympic Stadium and good viewing figures on TV, the days of Munich also became a carefree performance show. After the disappointing World Championships in Eugene/USA, where apart from relay bronze only another gold medal by long jumper Malaika Mihambo could be celebrated, the German track and field athletes rehabilitated themselves impressively.

The relief in the host’s entourage was correspondingly great: “It just showed how much potential there is in our sport and, above all, how great athletics is. People went along with it,” enthused the German team captain Gina Lückenkemper on Sunday evening in the Bavarian metropolis.

The sprinter even became the most successful participant in the German camp thanks to her individual title over 100 meters and the final relay victory. And that despite the fact that she had to have stitches on her left knee because of a fall at the finish line last Tuesday. “I’m still injured too. I gave everything to be on the track with the girls again,” said Lückenkemper, who, like at the World Championships, handed over to Rebekka Haase on the last leg. Instead of Tatjana Pinto, who was injured this time, Lisa Mayer ran in second place.

“Without Any Great Stunts”

In the gold rush, however, it should not be forgotten that the sustainability of the successful European Championship is possibly manageable. While many nations clearly chose the World Championships a month ago as a sporting highlight and often regarded the European Championships only as an extra, the main focus of the German Athletics Association was clearly on the showdown in Munich. So some unexpected medals jumped out. Konstanze Klosterhalfen, for example, according to her trainer Pete Julian, shouldn’t actually start over the 5000 meters for fear of overloading, but then decided to take part – and won impressively. At the World Cup four weeks ago in the USA it was only enough to get to the heat.

Even more remarkable was the transformation from a pitiful sportswoman to an acclaimed heroine in another German. Lea Meyer got stuck at a hurdle during her run in Eugene in mid-July, fell headfirst into the moat and became the symbol of a damn world championship. Now she succeeded in Munich over the 3000 meter obstacle and won silver. “Eugene was angry, that was stupid, you do that once in a lifetime, it was a lack of concentration. I’ve shown that I can do all of that without pulling off any great stunts at the moat,” Meyer said on his own behalf after his rehabilitation.

What all the medals won will be worth, however, remains to be seen. The only thing that is certain so far is that the public holidays in Munich will not serve as a basis for evaluating the coming financial support. Future federal funding will only be calculated on the basis of one gold and one bronze at the disappointing World Cup a month ago in the USA.

The performance was the worst ever in the history of German athletes in global title fights – which is why doubts may arise about the one-sided weighting and the clear focus on the European Championships. It might have been better to target the World Championships as a seasonal highlight in the training plans of some athletes.

The sporty border crosser Burghardt defended the procedure. “I think you’ve seen what we’ve prepared for and why. It was a unique atmosphere here in Munich,” explained the gold medal winner.

And the “king of athletes” was also happy afterwards that he had been able to get the last grains out of his body in front of his home crowd. “Munich will always have a very special place in my heart,” said decathlon title holder Niklas Kaul. “I’ve never experienced anything like this,” said the man from Mainz, who had already witnessed a home European Championship in Berlin four years ago.

In the final 1,500-meter run, “his ears almost blew off, it was amazing. That shows that German athletics is alive and that there was a good reason for all of us to look forward to these days here.”

Such optimism was not quite as great among some officials in the run-up to the EM. Jürgen Kessing openly admitted that he was rather skeptical as to whether track and field was the right choice as the locomotive of the title fights in a total of nine sports in Munich. In the end, however, the President of the German Athletics Association could be satisfied. “All in all, we had a great week,” he summed up.