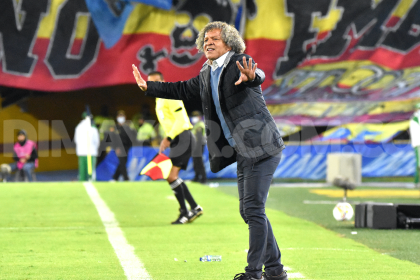 Millionaires conquered the vintage classic. Beating Deportivo Cali, judiciously, to get to score and achieve one more victory, which leaves them as leaders of the championship. A team with criteria, focused on looking for the goal and achieving important results.

The coach, Alberto Gamero, spoke at a press conference about the impressions left by the match against Deportivo Cali.

Pereira’s game analysis and performance: we knew we were going to play against a team that was looking for the result. At times, we played it well. In the first half, a bad control, a rejection and they had the option, Álvaro saved us. The game was formal for us, with good possession. We figured out the three they made in the middle. When we change profiles, we open the field.

Then, the process, where we were able to score more goals. The expulsion conditioned us. We left 9 with the two central defenders and leveled the match. About Pereira, he had never scored three goals. There are things to analyze, talk about, but I loved it. He has been doing a good job, playing alongside Larry.

I play in the middle of the field and Pereira’s new position: when we wanted to internalize the game, Larry and Llinás could do it in the middle. As in the goal, play to a touch. To go through the middle, we had to take the ball to the sides, every rival opens lines, at times we did well. Something intelligent from Mayer, with a center back like Robles, who is not, he must play it with the three in the middle.

However, when we carried the ball to the side, we found someone to play with. We have been practicing and analyzing it. With Silva behind the flyers. Larry knows how to filter balls, the center backs the same. One goes up, the other stays. Pereira has done well, that one completes with Silva, later on.
You have to take it calmly, without despair. Cali came out to play, with a mid-low block.

Change of Silva and his role off the field: I have a friendship with Silva. You see him there, so that you understand him, he is not going to be giving instructions. He is learning, he asks me what I see, what I will do. The relationship with Silva is one of friends, he has a lot of football left. He likes to see that he makes one, what the instructions are, what reasons one commands.