Barça is excited about Gamper 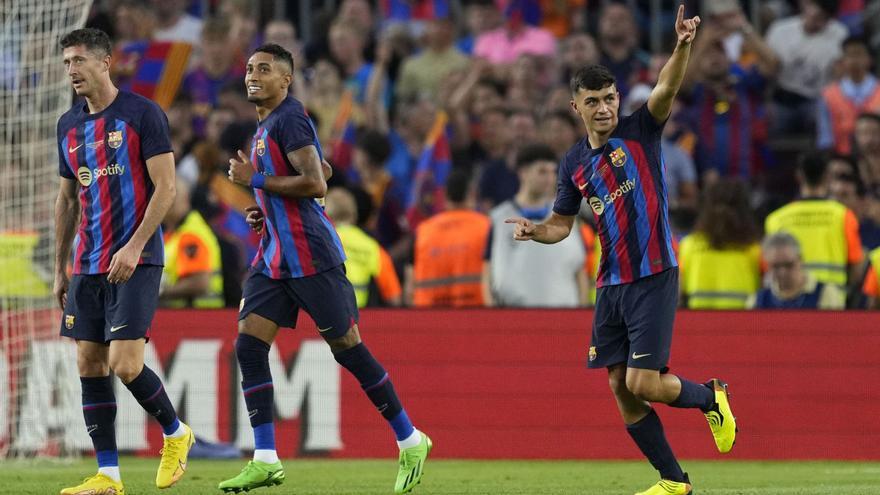 Xavi Hernández’s Barcelona thrashed the Mexican Pumas 6-0 in the presentation in front of their fans (specifically, 83,021 spectators) at Camp Nou in the Joan Gamper trophy. As is traditional, before the starting whistle the squad that will face the 22/23 season was presented with a special role for the new signings. To all this, Xavi addressed the fans and assured that he wants to make the fans happy: “This is what happens to win titles this season. This is the main objective and we will leave our skins there».

Alves himself, who has participated in historic thrashings at Camp Nou, knew what it feels like to be on the other side. Barça started the first half in “crushing mode”. It only took 3 minutes of the game for the new signing of the season, Robert Lewandowski, to make his debut at the Camp Nou. He took advantage of a good pass from Pedri to cut the goalkeeper and finish from an obscure angle. Shortly after, in the 5th minute, the understanding was repeated but with the opposite roles: Lewandowski assisted Pedri, who solved the problem by drawing the Pumas goalkeeper. But it wasn’t enough for Barça and Raphinha assisted Dembélé to score the third with a placed shot. To top it off, Lewandowski once again assisted Pedri with a spur to make it 4-0 in just 19 minutes played. The team continued to harass the opposing goal and ran into the post several times, but the score did not move further before the break.

In the restart, Xavi changed most of the protagonists, with the exception of Lewandowski. The second unit, which faced the second half with an overwhelming result in favor, did not relax and continued with the dynamic of offering the fans even more spectacle. When only 5 minutes of the restart had been played, Frank Kessié, who joined this summer market, assisted Aubameyang so that he consumed the handle in an empty net. Then, around half-time, Xavi made even more changes to give prominence to all the players in the first team. Of all of them, the addition to the field of play of Jules Koundé stood out, who made his debut with the Blaugrana team after being the last footballer to join under Xavi’s orders. In the following minutes, Pumas woke up from the nightmare and had the option to make up the electronic, but Iñaki Peña resolved the rival attack well. At the end, Frenkie De Jong, protagonist these days due to rumors about his future, put the icing on the cake by recovering the ball and calmly solving to make it 6-0.