Ahsan/Hendra and Noise Asked to Retire 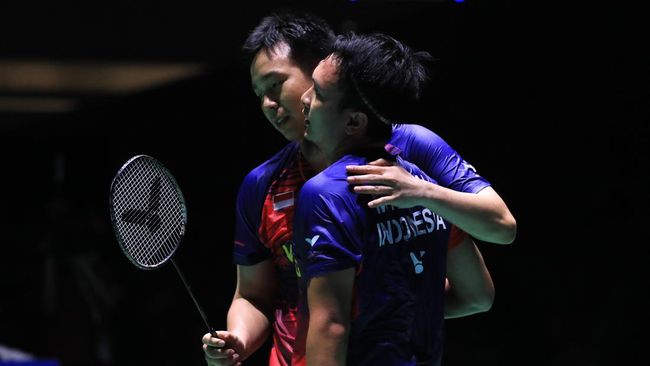 Mohammad Ahsan and Hendra Setiawan had a pretty tough day on Sunday (28/8). They lost in the World Championship final and still have to read a number of comments that corner their presence on the badminton court when they are considered too old.

Ahsan/Hendra had to settle for a silver medal while standing on the men’s doubles podium at the World Championships. They lost to Aaron Chia / Soh Wooi Yik with a score of 19-21, 14-21.

The defeat crushed Ahsan/Hendra’s ambition to win the fourth world title as a couple. While they are trying to set the tone and contemplate their defeat, Ahsan/Hendra must be aware of the fact that there are many verbal attacks directed at them in cyberspace.

The negative comments directed at Ahsan/Hendra were about asking them to retire, so that the way to regenerate in the men’s doubles number is considered to be more open.

In addition, Ahsan/Hendra was also widely discussed and considered to have lost in the semifinals so that it was Fajar Alfian/Muhammad Rian Ardianto who qualified for the final round and faced Aaron/Soh in the final.

“I know about the netizen’s comments, it’s been a bit late because after losing I didn’t immediately play HP.”

“I don’t really think about the comments myself,” Hendra told CNNIndonesia.com.

Although he didn’t care, Hendra mentioned that his wife, Sandiani Arief, had also received comments that cornered the Ahsan/Hendra duo.

“I told my wife not to worry. Those who commented like that, I don’t think I understand badminton,” said Hendra.

According to Hendra, comments like being asked to give in are strange comments.

“If you give in, of course the mentality of young players will not be formed. In addition, for example Fajar / Rian who qualify for the final and they lose, later there will also be someone who says if Daddies qualify …,” said Hendra.

Hendra emphasized that he and Ahsan still have high ambitions to continue to excel. This year, Ahsan/Hendra recorded an impressive performance.

Hendra was not completely satisfied with this year’s achievements because the four finals they had fully walked only ended up being runners-up.

“This year our target is to stay in the top five. Indeed, the opponents performed better than us in the final played. I hope we can perform better in the next opportunity,” said the 38-year-old player.

Read the continuation of this news on the following page >>>