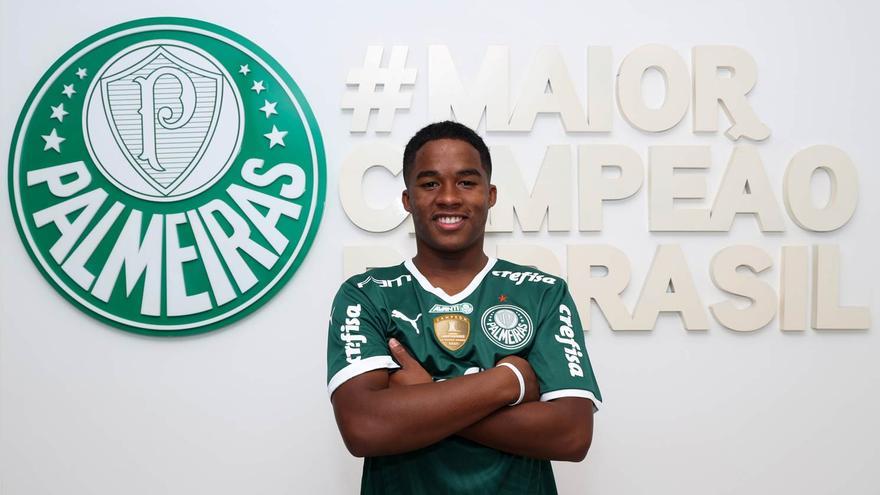 The ‘prodigy boy’ of ‘Verdao’ signed for three years, but his idea is to jump to Europe in the summer of 2024, when he is of legal age

There is a clear path for Barça and Palmeiras to sit down and talk to close a transfer agreement for Endrick. The center forward, for whom all of Europe sighs, was 16 years old yesterday and signed his first professional contract until 2025. There is no longer any bureaucratic stumbling block for Barça to formalize the signing of the ‘boy prodigy’ from ‘Verdao’, who has become the desired goal of all the big clubs on the Old Continent.

The young center forward turned 16 yesterday and, as had been announced two months ago, became a professional. He committed to Palmeiras for the next three years (which is the maximum that FIFA allows in minors). His contract will expire in July 2025 and, according to the Brazilian press, the termination clause amounts to 60 million euros.

The crack apprentice, and the professional team that advises him, have all the negotiating power on their side. Since the footballer, who will not renew with Palmeiras, plans to leave his country in the summer of 2024, when he is of legal age, to start his European career. By then, he will only have one year of employment with his current club, so the value of his transfer will drop a lot.

The professionalization of Endrick, in fact, is the starting signal of a very tough race that all the greats of Europe will play in order to close a transfer agreement. All those involved are aware of this situation and Palmeiras, who, of course, will want to organize an auction to sell it to the highest bidder.

Until now, when FIFA prohibited any negotiations between clubs because the player had a training contract, Barcelona has moved very well behind the scenes. In a very discreet way, he has placed himself in a good starting position.

In this highly competitive environment, and with so many top clubs interested, the striker’s will will end up being the deciding factor. And, it should be remembered that both for Joan Laporta’s board and for the technical secretariat, to enter into any operation it is a sine qua non condition that the player gets wet to deactivate the competitors, as they have done recently Raphinha y Lewandowski. This rule is non-negotiable.

Despite all the pressure around his figure, Endrick has closed a dream first semester in which he has won the three titles at stake: the unprecedented Copa Sao Paulo de Juniores for Palmeiras, which was the tournament that launched him to world stardom; the Montaigu World Cup, which meant his international debut with the youth categories of the Seleçao, (he was MVP and striker) and, more recently, the Copa do Brasil Sub-17, with a high-level final against Vasco da Gama .

His technical skills, with a left foot that is pure gold, and his records are impressive. They are typical of a precocious out of series, to whom the training categories have been too small for a long time. This year, he has scored 21 goals in 20 games (the vast majority against rivals up to five years older).

Throughout his career at the Verdao base, he has scored 87 goals in 115 games. He is a physically very strong footballer and his club already sees him as ready for the challenge of starting to get minutes with the first team.