Tour de France: Shortly before the finish, van Aert shows what he has ahead of Pogacar 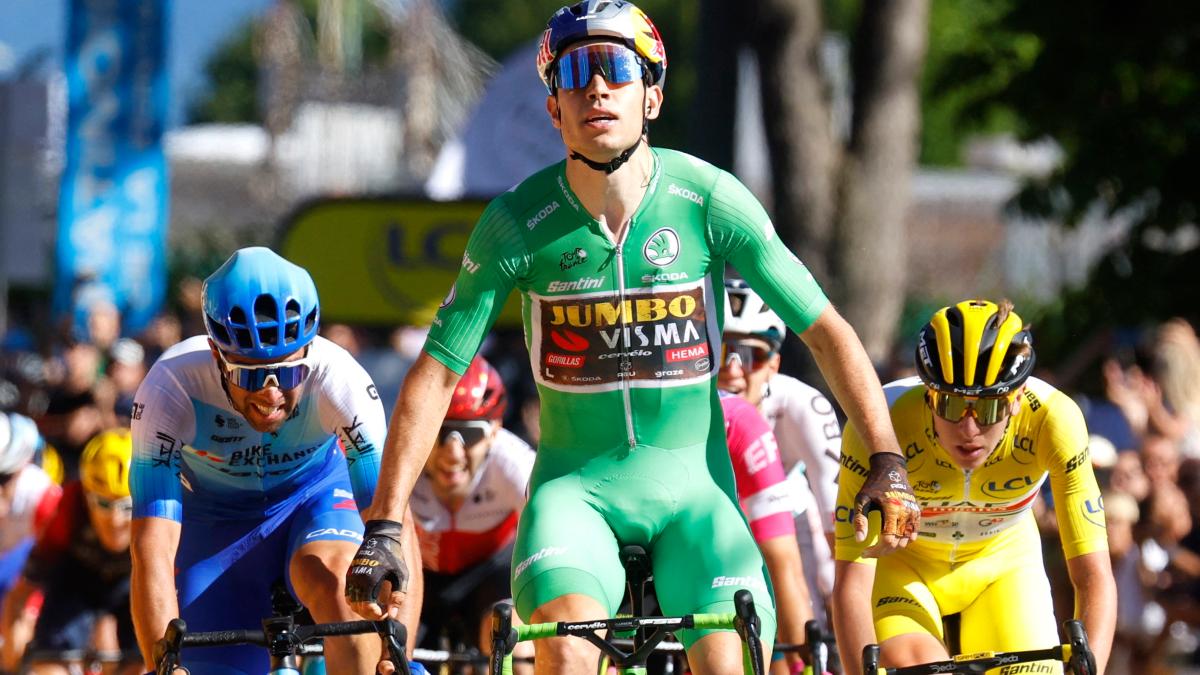 Shortly before the finish, van Aert shows what superstar Pogacar has ahead of him

No chance for the escapees. Even with the difficult arrival in Lausanne, the top favorites of the Tour de France are among the front runners. But van Aert shows his strength in front of Dominator Pogacar. Meanwhile, there is worrying news. The first corona cases in the peloton became known.

MWout van Aert won the Tour de France in Switzerland with perfect timing in the sprint and celebrated his second stage victory at the Olympic Stadium in Lausanne. The Belgian and green jersey wearer prevailed on Saturday’s eighth stage ahead of Australian Michael Matthews and leader Tadej Pogacar. Maximilian Schachmann was at the front for a long time in the difficult final, worked for his captain Alexander Wlasow and had to be torn down in the end.

“I’m happy about the win, I wanted the points for the green jersey. My team did a great job of preparing it and I just had to finish it,” said van Aert, who had to fight in the four-kilometre final climb from Lake Geneva to the headquarters of the International Olympic Committee on Saturday: “It was a tough climb. I had to fight to stay on Pogacar’s back wheel.”

There were only small shifts in the overall ranking. Slovenia’s Pogacar extended his lead with a time bonus and is 39 seconds ahead of last year’s second Jonas Vingegaard. Above all, the Dane is hoping for the longer climbs in the Alps next week to attack Pogacar. Third is Geraint Thomas, 1:14 behind. The Welshman is in better shape than he has perhaps been since his 2018 Tour win.

After the first mountain finish, the peloton was willing to take it easy and give breakaways a chance. But the stage began as hectic as in the previous days. After eleven kilometers, a serious fall occurred on a straight road, in which Pogacar was involved alongside Maximilian Schachmann. The Slovenian’s UAE team calmed the pace in the field until their captain, who had been a minute and a half behind, caught up again.

First Corona cases in the paddock of the Tour de France

A trio of breakaways dominated the stage for a long time. Italy’s Mattia Cattaneo, Belgium’s Frederik Frison and Britain’s Fred Wright broke away shortly before the Pogacar crash and gained a maximum lead of three and a half minutes. Frison was then unable to pursue his fellow escapee, then Cattaneo lost his strength and Wright was caught 3.5 kilometers from the finish. Pogacar went into the last steep ramp with two helpers, but it all came down to a sprint decision, in which van Art then showed his strength.

Before the start of the stage, the first corona cases of the tour were reported. Pogacar’s Norwegian teammate Vegard Stake Laengen had to retire after a positive test, as did Frenchman Geoffrey Bouchard. Before the start of the tour in Copenhagen, six drivers had to leave due to positive tests. On the first rest day on Monday there are mandatory tests for all drivers and supervisors.

The ninth stage on Sunday ends with a mountain finish

“Vegard was negative on our internal tests on Friday morning. In the evening he complained of a sore throat and a rapid test was positive. A PCR test confirmed the result,” said UAE doctor Adriano Rotunno. AG2R announced that all drivers and supervisors were given quick tests every three days. There were tests by the organizers.

The world association UCI had relaxed the corona rules a few days before the start of the tour. Instead of PCR tests, only quick tests were sufficient, and a team no longer has to leave the race after two drivers have tested positive. A new rule also states that a driver can remain in the race despite a positive test if he is symptom-free and not contagious. Such was the case with Luxembourg’s Bob Jungels, a teammate of Bouchard.

The ninth stage starts on Sunday in Aigle, at the headquarters of the UCI, the world cycling association. After a loop through Switzerland including crossing the 1778 meter high Col de la Croix, it’s back to France. Before reaching the finish line, the Pas de Morgins, which is more than 15 kilometers long, must be mastered before, after a total of 192.9 kilometers, it goes up to the second mountain finish in Les Portes du Soleil. The first rest day is on Monday.