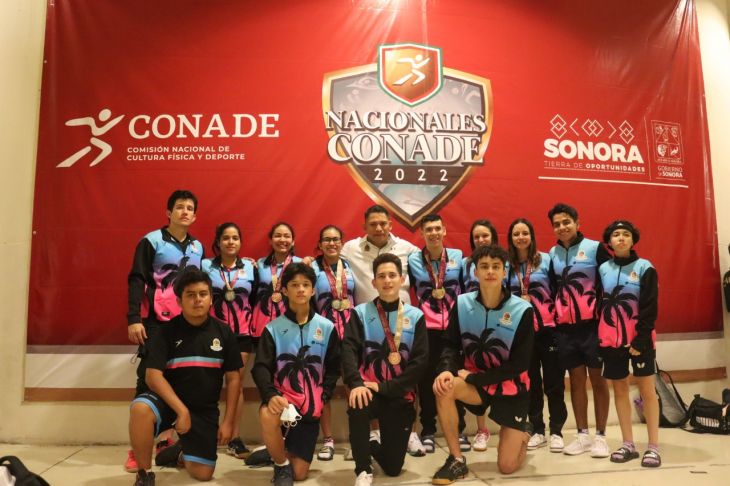 The Quintana Roo sports delegation finished among the best 10 of the Conade 2022 National Games, with a total of 205 medals: 67 gold, 72 silver and 66 bronze, which placed it in seventh position in the national medal table.

The Caribbean athletes exhibited a great performance in the national fair that placed them among the best in the country and first place among regions 6, 7 and 8 of the National Sports System (Sinade), which integrates Mexico City into Region 6 , Guerrero, IPN, Morelos and Tlaxcala; Region 7 made up of Oaxaca, Veracruz, Puebla and UNAM and Region 8, where Yucatan, Campeche, Chiapas, Tabasco and Quintana Roo are located.

After a long process interrupted by the pandemic, in which the competition was suspended in 2020 and 2021, this 2022, with all the health protocols, the Quintana Roo delegation attended the sports fair in search of making history.

Quintana Roo athletes from 20 disciplines achieved the goal of climbing to the winners’ podium, where Weightlifting again took the highest number of medals for the entity, with a total of 55 metals, 16 gold, 23 silver and 16 bronze.

Swimming makes history in the nationals by getting the first place for teams in the competition, with 37 medals, 16 golds, 17 silvers and four bronzes; and the Sailing discipline won the five-time national team championship, with 16 medals, six golds, five silvers and five bronzes.

In number of medals, Luchas Asociadas obtained 13 medals in this competition; Table Tennis and Judo got a total of 10 medals each; Archery climbed to the podium for seven metals and Remo returned home with six medals.

For the first time, Quintana Roo competed in the Nationals with Trampoline Gymnastics, obtaining three medals: one gold and two silver; and for the first time they participated in Breaking, achieving a silver medal.

Chess and Triathlon obtained three medals each, and Boxing, Tennis, Canoeing and Taekwondo finished with two medals. Diving and Karate concluded with a medal.

The sports fair that formally ended on July 26 with the departure of all the delegations, was held at the Baja California headquarters and sub-venues, such as Baja California Sur, Sonora, Sinaloa and Jalisco, for almost two months.