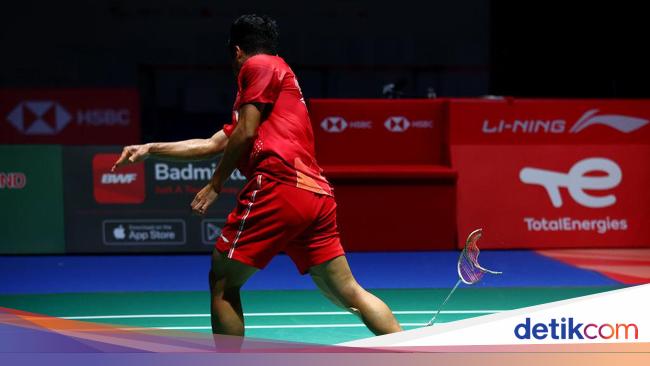 There was an interesting moment when Anthony Sinisuka Ginting won the Singapore Open 2022. Ginting slammed his racket when the match was over, his emotions spilled and he finally won!

The final of the Singapore Open 2022 will take place at the Singapore Indoor Stadium, Sunday (17/7). The last match was the fight for the champion in the men’s singles number.

Anthony Ginting faces Japan’s representative, Kodai Naraoka. Although on paper Ginting’s ranking is far superior, in fact Naraoka is not an easy opponent.

Anthony Ginting won the first game 23-21 and won the second game 21-17. But throughout the fight, Naraoka often makes it difficult for Ginting!

Naraoka’s variety of punches and tenacity when chasing the ball made Ginting exhausted in two games. Even in the first game, Naraoka almost won before Ginting could finish.

On the championship point, Ginting’s cross smash failed to be returned by Naraoka. The ball goes in, Ginting releases his emotions!

Anthony Ginting screamed with joy until he slammed his racket!

No doubt, Anthony Ginting has not felt the title of champion for a long time. He also admits that his performance has been declining in recent times.

You could say, Ginting was very emotional after finally winning the Singapore Open 2022. No doubt, Ginting last won the Indonesia Masters 2020 or about two years ago.

“This is one of the best moments because the last few months of the year-end performance and results were not good,” he said in an interview after the game.