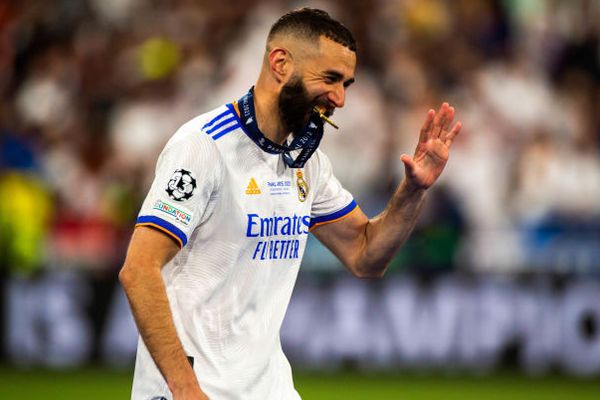 Untouchable and indisputable at Real Madrid, striker Karim Benzema should quickly receive a new contract proposal from his leaders. Whatever happens, in the event of a Ballon d’Or coronation, the Frenchman will see his lease, currently running until June 2023, automatically extended by one season.

Winner of the C1, Benzema has set the bar high this season.

Between Karim Benzema and Real Madrid, it’s a rolling business. Solidly established on the front lines of the merengue attack since 2009, the Frenchman improves, like good wine, with age. For four years and the departure of Cristiano Ronaldo, the former Lyonnais has notably raised his level and taken on the role of boss on the pitch.

A new status that suits it perfectly, and has enabled Real to return to the top this season, with success in La Liga and then in the Champions League. With 44 goals scored in 46 games played, the French striker has also had an XXL season and greatly contributed to the success of his team. So inevitably, the fact that Benzema has a contract until June 2023 is something to challenge.

A Ballon d’Or will secure Benzema’s future at Real

And yet, in the merengue ranks, a feeling of optimism reigns particularly, as explained by the newspaper AS this Sunday. Already, because the native of Bron intends to continue living his fairy tale in the Spanish capital, and wants to finish his career at Real. But also, because the Madrid leaders intend to discuss a new contract with him. And that’s not all, a potential Ballon d’Or coronation, which will be awarded on October 17, from the Habs will also have an impact on the future of KB9.

Indeed, in the event of victory for the most prestigious of individual trophies – and Benzema stands out as the big favorite – the star of the French team will see, like his team-mate Luka Modric in 2018, his contract automatically extended by one year with Real, i.e. until June 2024. Enough to give the White House some respite and above all to avoid any unpleasant surprises in the coming months.

In your opinion, should Benzema attempt a final challenge elsewhere than at Real Madrid before the end of his career? Do not hesitate to react and discuss in the area add a comment …