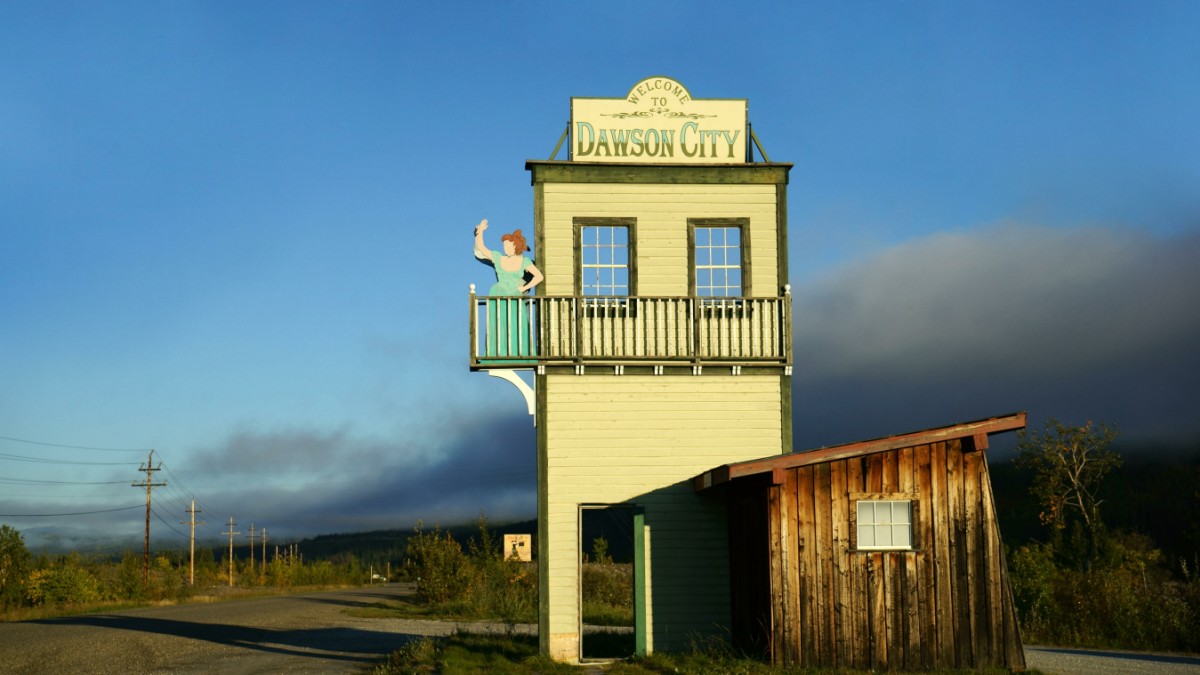 Maybe the treasure won’t work out after all: Big Jim got hit on the head after he found it and therefore forgot where his gold was. Here in wintry Alaska one snowdrift looks the same, how is he supposed to remember the right place? His good-natured friend the tramp wants to help him find the camp again. Here, at the latest, humanity and capitalism come into direct clinch in Charlie Chaplin’s film “The Gold Rush”.

The Klondike Gold Rush was long over when Chaplin premiered his film in Los Angeles in 1925. Between 1896 and 1898 prospectors greedily descended on Alaska and Canada. One of the largest transshipment points at the time was the Canadian border town of Dawson, where the Klondike River meets the Yukon. Founded in 1896, the city grew to 40,000 inhabitants within a year. When the gold rush moved on in 1899, there were barely 9,000 people left.

What remained, however, was the quickly erected infrastructure: churches, bars, educational and leisure facilities, now swept empty like film sets after shooting and left to decay for decades. Back then, no one could have guessed that more than 75 years later another treasure would be unearthed here. Here, too, forgetting played a decisive role – and a pragmatic banker: Clifford Thomson.

The frozen ground had preserved the sensitive material well

In 1929, he solved two problems at once. The former Dawson City Athletic Club pool has long served as a field for the Hockey League, of which Thomson was Treasurer. But because the area was originally designed as a swimming pool, temperatures fluctuated significantly towards the center and the ice softened. Thomson began to fill the basin with rubbish – including material that the local library wanted to get rid of: in the library’s basement were several hundred rolls of film, still made of highly flammable celluloid at the time, which had caused devastating fires in cinemas and production facilities worldwide since its introduction .

The roles had accumulated over the years, with Dawson being the literal terminus for most of the films. The production companies often only sent the copies to the remote region years after the first showing and then had no further use for the old films, especially since the return transport would have been expensive. So Thomson just threw the rolls in the bulky waste and filled the pit with dirt. This enabled him to ensure a constant temperature on the ice rink.

The rolls of film fell into oblivion because, unlike the gold, their whereabouts were of no value to anyone. Not even for the three cinemas in town, since the talkies introduced in 1927 were now popular. Newspaper reports from the time confirm that a batch of rolls of film were also dumped in the Yukon River.

The ice hockey rink would probably have become the grave for the material if workers had not come across the pit in 1978 while building a leisure center. The historian Michael Gates visited the site and found that the sensitive material was still usable: the frozen ground had preserved the celluloid, which otherwise decomposes very quickly. Within a very short time, a heap of rubble had turned into a treasure trove: the “Dawson Film Find”.

Among the finds were lost silent films

Gates secured the scrolls and set about screening them with Dawson City Museum curator Kathy Jones. The 533 scrolls were given to archives and museums for preservation. The special thing about the find: the majority of the roles are unique. The material was gradually restored and partly also digitized. A year later, the Palace Grand Theater in Dawson was showing the films that had been restored by then.

But it was New York filmmaker Bill Morrison who first gave the spectacular find the attention it deserved in 2016. In his documentary “Dawson City: Frozen Time” he makes the significance of the material found clear. He derives a small cultural history from the incredible 372 feature films, newsreels, sports news and scientific programs. At that time, the cinemas were one of the few sources of information for remote cities and the newsreels were the connection to the outside world. The film Find is a rich cross-section of the information that reached Dawson at the time: news of the 1914 Ludlow massacre, in which the Colorado National Guard fired on striking miners, or previously unseen footage of the 1919 Baseball World Series, which was followed by a betting scandal was overshadowed.

The find is also of inestimable value in terms of film history: among the reels were silent films that had been considered lost, such as those by DW Griffith and Tod Browning, films from early Hollywood. What they all have in common is the so-called “Dawson Flutter”, a fluttering in the image: despite the otherwise favorable conditions, the wetness in the permafrost left traces on the celluloid: a white pattern at the edges of the image, which literally inscribes the history of the films. Film preserves history, as the find makes clear on several levels.

And the film reels in the Yukon River? They have not been found yet. Bill Morrison assumes that they could also have been preserved in the water. The treasure hunt, it may not be over yet.