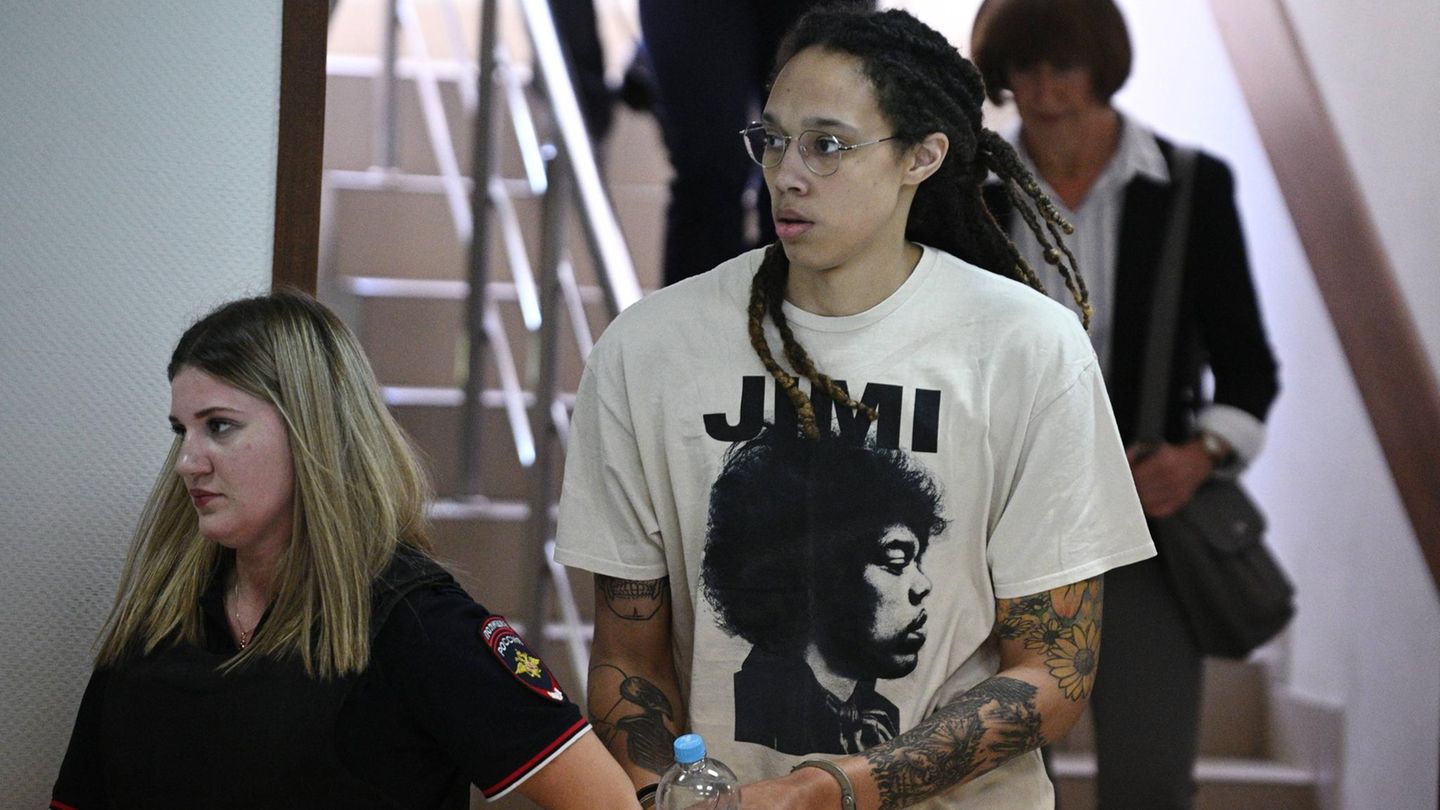 arrest in February
Because of 0.7 grams of cannabis oil: basketball star Brittney Griner faces ten years in prison in Russia

After more than four months in custody, the trial of basketball star Brittney Griner has begun in Russia. The United States is trying behind the scenes to release the 31-year-old.

She went to Russia to play basketball – and has been in prison for four and a half months. The fate of Brittney Griner, an American basketball superstar from the Women’s National Basketball Association (WNBA), is causing a stir in the United States. While the US government is now talking about illegal detention, the Russian investigative authorities insist that the 31-year-old had drugs in her luggage when she entered the country. After more than four months in detention, the trial began on Friday, only to be postponed relatively quickly. According to the state agency RIA-Novosti, only two witnesses were heard. Because two other witnesses did not appear at the start of the trial, the trial was postponed to July 7th.

Photos show the 2.06 meter tall basketball player entering the courtroom in Khimki, north of Moscow. She is wearing sweatpants and a white Jimi Hendrix T-shirt, and her hands are handcuffed. Griner was arrested at Sheremetyevo Airport on February 17, a week before the start of the Russian war of aggression in Ukraine. Customs officers are said to have found cannabis oil intended for consumption in their luggage.

The public prosecutor responsible explained the quantities involved at the start of the trial on Friday. According to a report by the Russian state agency Tass, she smuggled 0.7 grams of cannabis oil in her backpack and suitcase. An expert has confirmed the substance, which is therefore considered an anesthetic and is strictly prohibited in Russia. According to media reports, Griner faces between five and ten years in prison. Griner has to remain in custody for the duration of the court hearing anyway. At a hearing on Monday, a court extended the 31-year-old’s detention until December 20.

At the beginning of the trial, Griner also had the opportunity to speak publicly for the first time since her arrest. The 31-year-old explained that she understood the allegations against her, but did not want to comment further on the case for the time being. The two-time Olympic champion told the Reuters news agency that the time in custody was difficult for her. She doesn’t speak Russian and can’t keep fit apart from minor stretching exercises. Griner’s wife Cherelle had previously said in a radio interview that the 31-year-old was scared and alone, but had made a promise to her wife: “I will not let them break me.”

The Kremlin denies that the Griner case was a politically motivated imprisonment. “The fact is that a well-known athlete was arrested with banned substances. Russian legislation provides for penalties for such crimes,” Kremlin spokesman Dmitry Peskov told TASS. The arrest could therefore not have been politically motivated.

The case of the basketball player has now also become a political issue. After more than two months of quiet diplomacy, American politicians publicly condemned the arrest as unlawful. This was also emphasized on Friday by Elizabeth Rood, who was in court as head of the diplomatic mission. “The practice of unlawful detention is unacceptable wherever it occurs. It poses a danger to anyone working, traveling or living abroad,” Rood said. The US government has meanwhile also become actively involved in the negotiations for Griner. “The US government is trying to solve the case and bring Brittney home,” National Security Advisor Jake Sullivan said in a call Tuesday. Sullivan declined to say exactly what the government was doing.

Another statement shows how high the waves in the USA are in this case. Secretary of State Anthony Blinken responded to the first day of negotiations on Twitter. We – and I personally – have no higher priority than bringing her and all other unlawfully detained Americans, including Paul Whelan, home,” Blinken wrote. when they are reunited with their loved ones.Blinken’s explicit mention of Paul Whelan is no coincidence.The police officer has been in a Russian prison for two years on charges of espionage.

The US media has repeatedly speculated as to whether the US wanted to bring both prisoners back to the United States from Russia at the same time. If only Griner, a gay black man, or Whelan, a white man, returns, it could fuel the flames of an already divided American society. When asked by a CNN reporter whether Griner and Whelan could be released in a swap with US-imprisoned arms dealer Wiktor But, Blinken dodged recently on the sidelines of the G7 summit in Elmau. They are in contact with the families of the detainees, but “I can’t say in detail what we’re doing, except that the cases have absolute priority.”