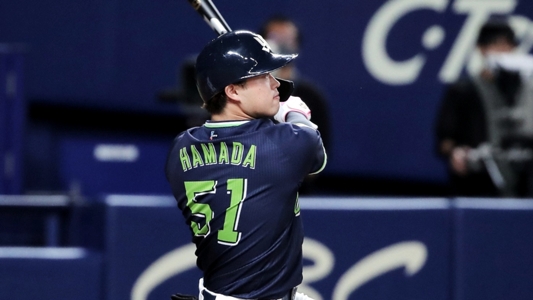 [Professional baseball]Taiki Hamada and Hideki Nagaoka of Yakult showed their presence in the match between Chunichi and Yakult on June 22nd.

Munetaka Murakami and Tetsuto Yamada are leading the team in Yakult, but in this match, two young players were active in offense and defense.

It was Taiki Hamada, who was 21 years old and was in his fourth year of high school, who was fascinated by the blow. He was tied 3-3 in the 6th inning, with 2 deaths and 1st base. Hamada, who was appointed as a starting lineup for two games in a row, threw the slider thrown by his grandfather Daisuke into the left wing stand while swimming.

DAZN official Twitter released the video with a romance comment to Hamada saying “Q. Is there romance there? A. There is only romance anymore”. Fans commented that “too much romance cannon”, “you can really aim for 30”, “this is really only romance”, and “too much cheat to reach Murakami on the right”.

In defense, Hideki Nagaoka, 20 years old, was fascinated by his third year of high school. 7th inning with 7-3 and 4 points lead, scene of first base without death. He shoots a ball asking Hironori Miyoshi to escape in front of the center. If it came out, it was a pinch of first and second base without death, but Nagaoka of the game caught diving and smashed his face but killed second base with a desperate toss. He picked a pinch bud.

DAZN official Twitter posted a video with a comment that “Yakult has a romance in defense.” Fans commented one after another, praising “Tamaran Nagaoka,” “This face and this play, it’s strange not to fall in love,” and “Nagaoka is also romantic after Hamada.”

Yakult, which runs at the top, seems to be steadily growing the young people who will lead the future.

● Munetaka Murakami, a batter who represents the ball world.What experts talk about in common with Shohei Ohtani | Professional baseball

With DAZN, you can broadcast your favorite sports anytime, anywhere, live and miss them! Check out the article below now.

●[Program guide]What is the latest content of interest?
●[Profit]What are the DAZN rates and discount plans?