Diego and an emblematic shirt: the one from the day he lifted the World Cup

A new auction linked to Diego Armando Maradona has just finished. After resounding success that meant the sale of the shirt with which the Argentine scored two goals against England in the Mexico World Cup 1986, on this occasion another of the jackets that he wore in that contest was available to collectors. In this case, it is the shirt that visited none other than Germany in the final that the team led by Carlos Salvador Bilardo won 3-2. The Julien’s site announced that was sold for 50 thousand dollars.

Although the Diez he did not score goals in that match, he was one of the figures and provided the key assist in Jorge Burruchaga’s goal that sealed the score in the complement. Like many of her relics, the former footballer also gave her away. In this case, the garment comes from the collection of the late reporter and journalist José María Muñoz, remembered for having put the voice of Argentine football for decades and even the 1978 World Cup. However, the controversy was ignited by the authenticity of the garment. : Argentine specialist Marcelo Ordas assured that it was not used in the game.

In dialogue with the program The Morning with Victor Hugo (AM 750), the collector clarified: “It was not his. It is a shirt that Diego gave to the family of the remembered Muñoz post-World Cup 86 rapporteur. It is not the one he used in the World Cup, it is a shirt that is considered protocol. It is dedicated and signed by Diego Maradona, but it has not been used and even less so in the World Cup. It is a bit long to explain, but technically on the back where the number is on the back, it is clear that the number does not coincide with the shirt of the time. 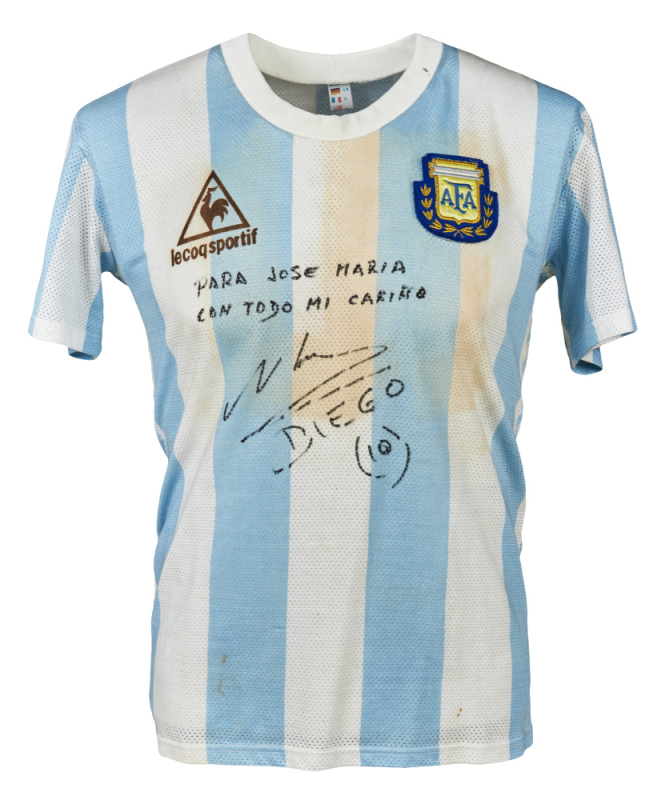 “Maradona signed the shirt with a black marker and inscribed “FOR JOSÉ MARÍA WITH ALL MY LOVE”. The legendary attacking midfielder scored several memorable goals throughout the tournament and finally led Argentina to its second World Cup title,” says the Julien’s site that opened the bid a few days ago that will end today in Beverly Hills.

“The blue and white jersey features the AFA (Argentine Football Association) patch on the left chest area and the Le Coq Sportif logo on the right chest area. Maradona’s number “10” is applied to the back in black letters. Size 40 (Argentina). Size L (USA). The shirt worn in the match signed by the player comes from the collection of José María Muñoz, the famous Argentinian radio and television broadcaster and sports journalist who called many matches of the 1986 FIFA World Cup. Included with the jersey are four press identification cards belonging to Muñoz. Accompanied by a Sports Investors Authentication (SIA) Letter of Authenticity for authentication issued by the party. A letter of authenticity from PSA regarding the signature is also included”, describes the portal. 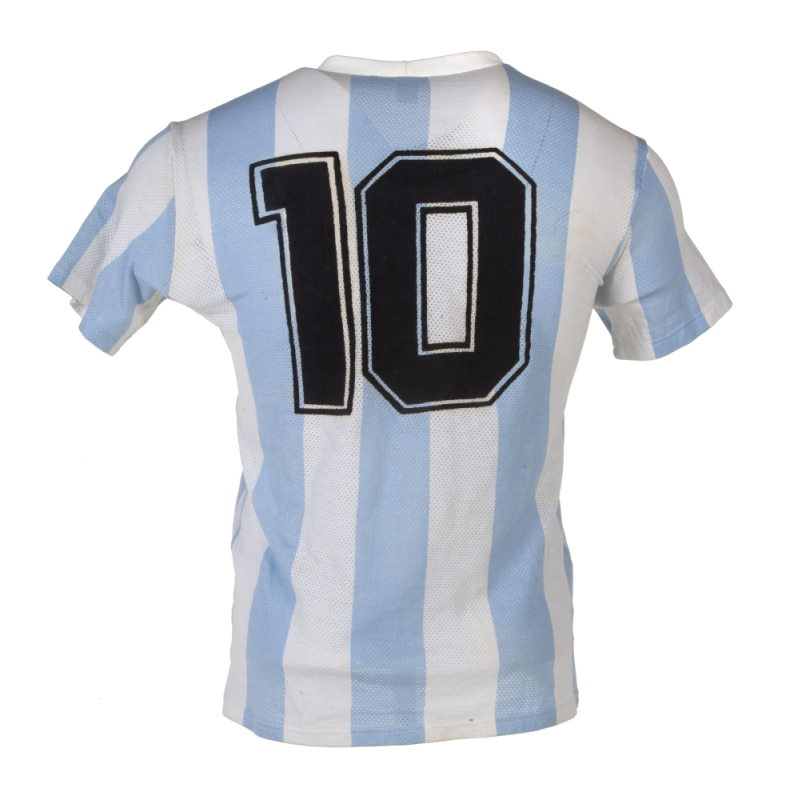 Apart from the great little pearl symbolized in the shirt of the final of the World Cup in Mexico 86 (of which it was not specified if it was the first or second half), another 33 items of lesser value were auctioned within this lot. Jackets from the National Team and the clubs in which the Argentine star served, boots, shorts and many elements that bear his signature stand out.

It should be remembered that in May of this year the Sothebys auction house auctioned the mythical shirt that Maradona wore when he scored both goals against England in the 1986 World Cup for more than USD 9 million. In the previous one, in Great Britain they speculated that it could end up being acquired for anywhere from five to eight million dollars.

The number broke an absolute record. To have an idea of ​​the amount that was paid, the current brand was from a New York Yankees jersey that had belonged to the legendary baseball player Babe Ruth and used in the period 1928-1930: it had been sold for USD 5.64 million in a auction on June 15, 2019, which had made it the most expensive sports collector’s item ever sold. While the value of Maradona’s was more than USD 9 million.

For years, the garment was in the possession of former English soccer player Steve Hodge, who played in that historic 1986 World Cup match. That exchange marked his career and his life, so much so that he titled his biography “The Man in Maradona’s Shirt.” The garment was on display at the Manchester Football Museum. “I had offers to sell it but I did not want to do it: it is the great moment of my career and a memory of the best footballer who played this sport”, he had assured in the book “El Partido”, by Andrés Burgo. But something made him change his mind.

The days of Diego Maradona in the Colimba: the heartthrob who was his “partner” and Videla’s order after being world champion
The tears of the Argentine collector who lost the auction of Maradona’s shirt 17 seconds from closing
The day that Maradona’s shirt auctioned for 9 million dollars was about to be ruined on a TV show
Facebook
Pinterest
Twitter
LinkedIn
Email