The other impact of The Hand of God: the profound regulatory changes that led to Maradona’s emblematic mischief against England 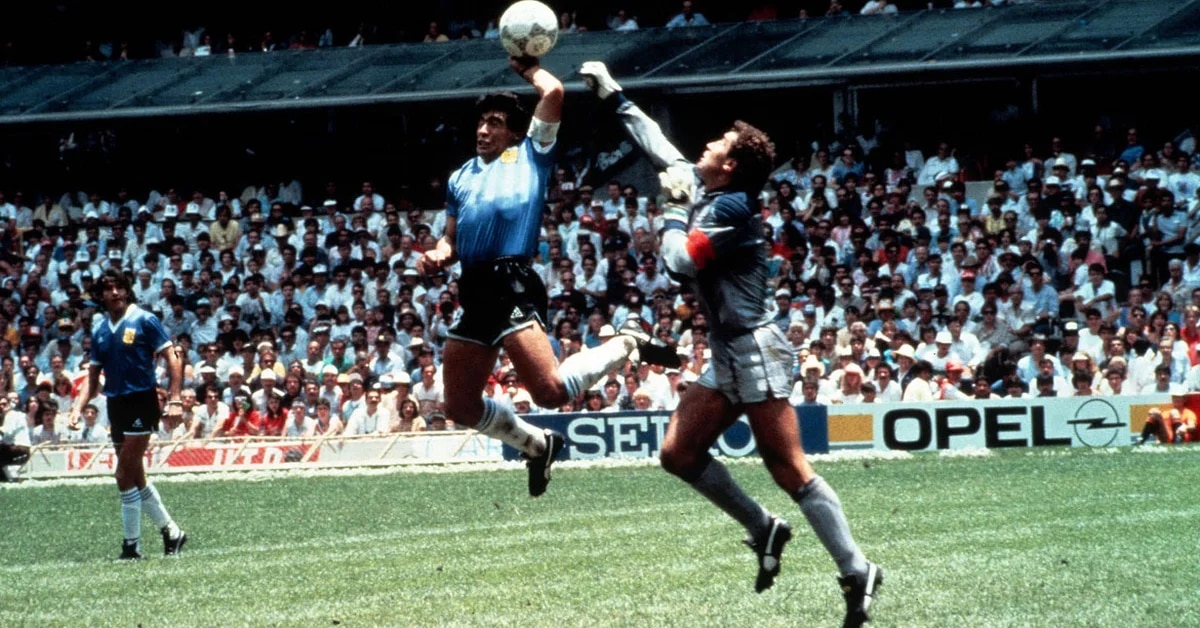 An immortal photo: the moment when the left fist deceives Shilton’s exit and also deceives the referee’s eyes. It will become Argentina’s 1-0 against England in Mexico 86

There have been few encounters in the history of the world cups that left an impact as transcendent as those carried out by Argentina e England in the quarterfinals of Mexico 86 and, to a lesser extent, the duel between the Albiceleste and the Soviet Union in Italia 90.

Guilty? An Argentine, the one who amazed the world by his magic. Diego Maradonaa supernatural phenomenon, left us with indelible memories such as the second goal against the English, a genius considered the best in the history of the World Cups.

In that meeting there was another fact that the Argentine captain offered us, which did not go unnoticed either. We refer to the first goal, which he called “the Hand of God”, after sneaking the ball with his fist over England goalkeeper Peter Shilton.

Maradona took the ball outside the area and with his left leg passed it, between several English defenders, to his teammate Jorge Valdano, who was intercepted by Steve Hodge. Due to the dynamics of the play, Maradona would have been offside, but because the ball came from an opponent, it was correctly enabled.

Already inside the area and with the ball falling, Maradona went in search of him alongside goalkeeper Peter Shilton, 20 centimeters taller than him. The goalkeeper jumped with his right hand, at the same time that Maradona did it with his left arm extended. The Argentine’s fist, close to his head, hit the ball first, which entered the goal.

The Tunisian referee Ali Bin Nasser could not observe the infraction from his position and those who assisted him on the lines (Costa Rican Berny Ulloa and the bulgarian Bogdán Dochev), following the instructions of the head judge, “should not participate” if they were not asked.

In an interview three years before his death, Dochev assured that the FIFA rules at the time dictated that he should only offer his verdict if the referee asked him directly: “The referee even conceded the goal before looking at me to check the situation. We never had communication, Bin Nasser only knew his native language”.

Then the World Cup in Italy 90 would come and another play by Maradona would mark a refereeing milestone. In Argentina’s victory against the Soviet Union, at the San Paolo stadium, Diego prevented a goal with his arm, emulating what was done in 1986 with the “Hand of God”. Soviet coach Lobanowsky came to the opinion at the end of the match that “the world of football and the referees see Maradona as a Venus de Milo without both arms.”

“The Hand of God” and his younger sister played a fundamental role in FIFA giving a new order to the rules. The IFAB (International Football Association Board), which with its conservative mentality did not allow substantive changes, while its members nominated themselves as “the guardians of the rules of the game”, had to share the process of regulatory modifications together with FIFA.

What changes did FIFA produce? It forced to rethink in the Referees Commission and in the IFAB changes in terms of professionalism. They went from giving the judges a simple travel allowance for their participation, relying on the honor of being part of the big event, to a remuneration according to such a responsibility, giving another framework to the task.

In addition, a new protocol was created that today is cited as “Practical guidelines for arbitral members”. The authority of a football game was taught to move and position himself on the field of play in a totally contrary way to what was thought for 100 years. With the ball in play and stopped, he was directed to teamwork to enhance his task.

It was regulated that all referees learn the English language as the officialso that events such as those expressed by the Bulgarian line Dochev did not occur after Diego’s goal against England. Line judges were renamed “assistant referees”. And they went on to support the main judge in everything that happened during the game, both technically and disciplinarily. The maxim became: “When 22 don’t want to and one can’t, maybe four will make it”.

What would the VAR have left us? It took 28 years since Italy 90 for technology to reach football, surely today the Maradonian pranks would not pass without having the regulatory punishment. In the goal against England, by protocol, when the game was stopped, the Tunisian referee would have been invited to observe what happened after Pelusa’s restrained punch over Shilton, and he would have annulled the goal. In addition, it would be cause for a warning for unsportsmanlike conduct.

But even in that Diego was a forerunner. Nobody achieved such profound changes in the rules as Maradona from the immortal “Hand of God” and the “save” against Russia in 90.

The memories of the referee who whistled Maradona’s last goal in a World Cup: the advice he gave Diego in the middle of the match
Facebook
Pinterest
Twitter
LinkedIn
Email