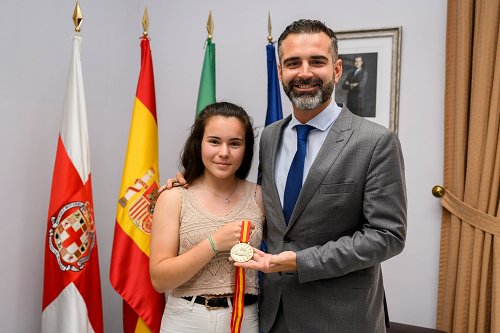 Almería has a brilliant pool of athletes who are born from municipal sports schools. This is the case of Cristina Teruel, the Almeria native who made the leap from EDM Mercapinturas to move to the Andalusian Center for Sports Modernization in Huelva, where she trains and studies to reach the top of her favorite sport: badminton.

The mayor of the city, Ramón Fernández-Pacheco, together with the Councilor for Sports, Juanjo Segura, received the athlete accompanied by her relatives to congratulate her on her successes. “For the whole city it is a pride that one of our neighbors triumphs outside of Almería in any discipline”, he reflects, “Cristina is a girl who treasures an impressive curriculum in her track record, it gives me great joy because she comes from the municipal sports schools, like the Mercapinturas Club, which is the nerve center of badminton in Almería”, he points out, praising the ambition of the athlete who “left Almería at such an early age to continue growing from Huelva in a discipline like badminton”.

Likewise, Ramón Fernández-Pacheco has transferred his congratulations to Cristina Teruel and adds that “I am sure that the next visits you make to Almería will be to give us more medals that you get in the different sporting events”.

For her part, Cristina Teruel has shown her happiness for the achievements. “I am very proud of what I have achieved, with this title I am the second youngest person to achieve it after Carolina Marín”, she acknowledges, having recently won the Best Athlete with Best Academic Record Award at a gala held in Jaén. The athlete points out that “I am in a cloud, I don’t believe anything that is happening, but I am very happy because with effort and work I am collecting good results”.

At the young age of 16, the Almeria native has just won the gold medal of the Absolute Spanish Championship. Thanks to her great performance, she made her trainers start signing her up for absolute appointments to see how far she would go. A second place in an Absolute Master and with the gold in the Andalusian Championship caused the plan to continue in the national one. There she climbed to the top of the podium after defeating Laura Santos in three sets: 15-21 / 24-22 / 21-12 in one hour and 6 minutes of play.

Other successes of Cristina Teruel

In her extensive track record, the Almerian has several calls with the Spanish National Team. In addition, she was fifth in teams at the European under-17 in Slovenia and ninth in women’s singles. Among others, she has been first in the European circuit and seventh in the European ranking.

Currently, in addition to astonishing in the absolute category in Spain, at an international level he steps on the mats in the junior category. And, looking to the future, her main goals are to get places for the Junior European Championship, in August, and the Junior World Cup in November.