The cauldron is lit in the Plaza Alfonso López de Valledupar 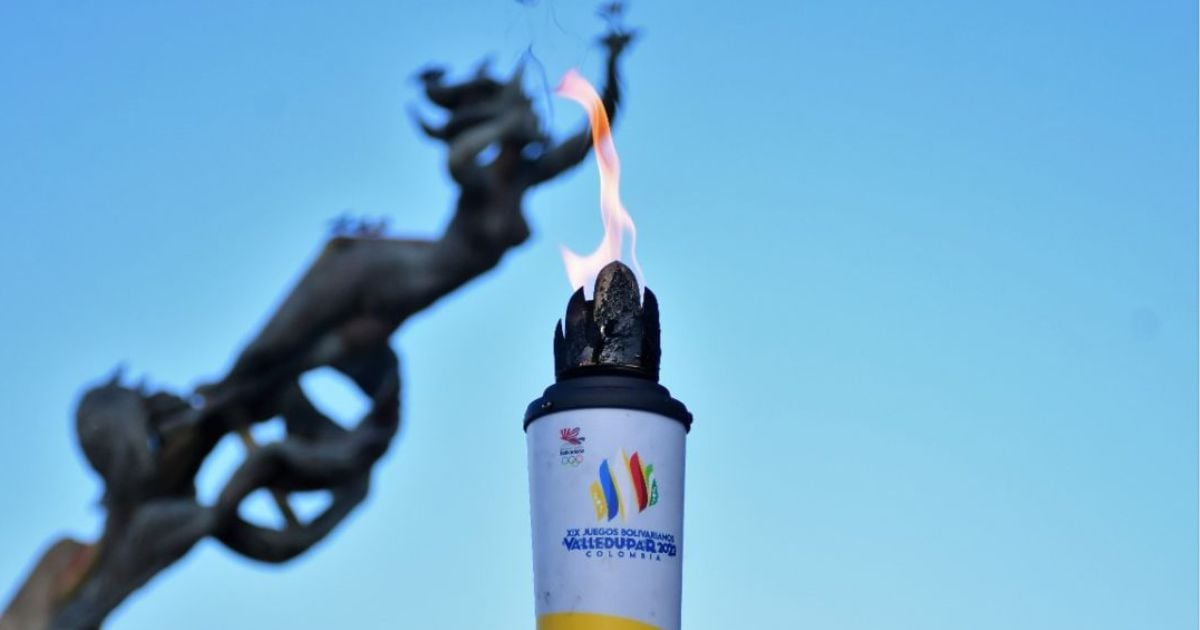 The Bolivarian sports fire will tour the communes of Valledupar

This is a space for free and independent expression that exclusively reflects the authors’ points of view and does not compromise the thinking or opinion of Las2orillas.

After touring the sub-venues of Bogotá and Chimichagua, the Bolivarian sports fire arrived in Valledupar, the host city of the multi-sport fairs that open the cycle to Paris 2024, which on Tuesday afternoon brought together its athletes to transfer this element that highlights the olympism, through the main avenues of the capital of Cesar.

From early hours the city mobilized in preparations to receive the Bolivarian sports fire that, after 4 pm, arrived in Valledupar and began to travel from the Obelisk roundabout, giving way to an emotional tour that included relays by renowned athletes from Cesar. , who shared the responsibility of carrying the torch before a large crowd that accompanied the transfer to Plaza Alfonso López.

The athletes Annie Vargas (Colombian rugby team), Robinson Varela (Cesar athletics team), Andrea Cañón (world skating champion), Gustavo Guerrero (Cesar judo team), Jorge Arias (professional soccer player), Manuel Moreno (Cesar de para-athletics) and Jesús David Gómez (Colombian powerlifting team), shared the relays of the Bolivarian sports fire, which was delivered to the distinguished athlete of the department, Óscar Muñoz Oviedo, who completed the transfer of the torch and in the presence of the mayor of Valledupar, Mello Castro González and the governor in charge of Cesar, Andrés Meza Araujo, lit the cauldron for the first time in the city that will host the Bolivarian Games from June 24 to July 5.

read more  Portet-sur-Garonne. A sports week to discover the sporting activity you would like to practice

“The XIX Bolivarian Games are a country commitment, we invite all Colombians to enjoy the tourist and cultural riches of Valledupar. This is a historic moment for our city and we are ratifying it with the lighting of the Bolivarian sports fire as a symbol of hope for all”, highlighted Mayor Mello Castro González.

For his part, Óscar Muñoz highlighted the importance of the ‘Bolivarian caravan’ because with this gesture “Valledupar showed all its support with the Bolivarian Games and the start of the competitions is expected.

“It is an important festival for the Vallenatos and for Colombia, this will leave a great legacy for the city,” said the taekwondoga, the only Olympic medalist in Cesarean sport.

n the next few days, the Bolivarian sports fire will travel through the Valledupar communes, from Wednesday 22nd, Thursday 23rd, to Friday 24th June, in a transfer that includes parades, cauldron lighting ceremonies, as well as sports and cultural displays in the squares of the neighborhoods 12 de Octubre, Primero de Mayo, Casimiro Maestre and the Garupal and La Provincia parks, to then enter the Armando Maestre Pavajeau stadium as one of the main acts of the official opening ceremony of Valledupar 2022.