The best of college basketball! Sheep Mty champions of ABE 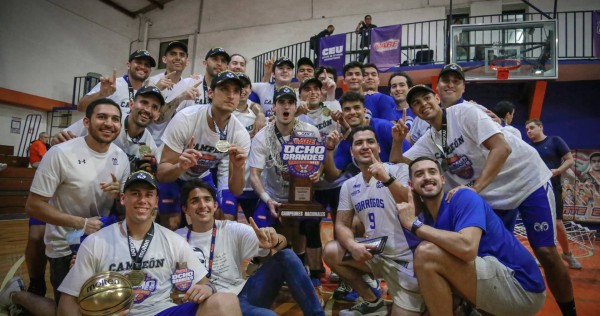 At the end of the 8 bigheld this Sunday, June 26, the Borregos defeated the CEU roostersthe hosts of the tournament, by 74-63, in a match where they were able to overcome the pressure of the local stands.

Orlando Torrero had an outstanding performance with 23 points and 19 reboundssome offensive players who were key in the last minutes of the match, as well as 5 assiststo be named the tournament’s most valuable player.

They dominate the final in “El Gallinero”

Los Sheep Monterey they started the first quarter with a great defense and in the first eight minutes the CEU had not been able to score a basketonly two free throws, and the period ended 15-11 in favor of the visitors.

For the second quarter, the The locals attacked with force and based on triples they managed to get up on the scoreboardbefore the hubbub of those attending the Prof. Omar Sandoval Gymknown as the “The chicken coop”.

Still, those led by Mario Moreno managed to take advantage once again by the combinations of the brothers Diego and Paulo Arroyo and at halftime they were leading 35-34.

in the third quarter Sheep He began to increase his advantage, which reached 14 points in this period, thanks to triples and a Torrero who began to show himself imposing under the rim.

“I am very happy and excited, mainly we dedicate this to coach Nacho may he rest in peace.”- Orlando Torrero

The last quarter started 56-48 in favor of the visitors and the “MVP“, as Borregos fans shouted at Torrerocommanded his team’s offense to not allow reaction from the Gallos.

In the final minutes of the game and with an 11-point lead, the Borregos controlled the ball and gained offensive rebounds that made the players of CEUwho in the final seconds threw in the towel and just waited for the match to end.

Los Sheep Monterey they began to celebrate as the quarter drew to a close and sentenced their victory 74-63.

So they got their first ABE League Championshipcreated in 2013, which was resumed after two years due to the pandemic of COVID-19.

Torrero, student of the Master of Engineering Managementpointed out that the dream of being ABE champions was fulfilled and dedicated it to his former coach Ignatius Morenowho passed away last year.

“I am very happy and excited, mainly we dedicate this to coach Nacho, may he rest in peace, who trained us all this time and here we harvested what he was harvesting for us for so many years..

“Together with coach Mario, an excellent coach, I hope to be with him next season and I hope to win much more with him and the rest of my teammates.”, expressed the most valuable of the tournament.

He with his partner Paul Arroyo They were part of the Dream Team. 8 big.

“It’s a dream come true, it’s what one visualizes as a child, and now that it’s come true I can’t believe it, I’m very happysaid the young man Ensenada, Baja California.

The tournament of 8 big are the final matches of the Student Basketball Association (ABE) League.

In this competition, Sheep Monterey won the PU Mexico City in the quarterfinals and at UPAEP in the semifinal, in order to reach the final and win the championship.