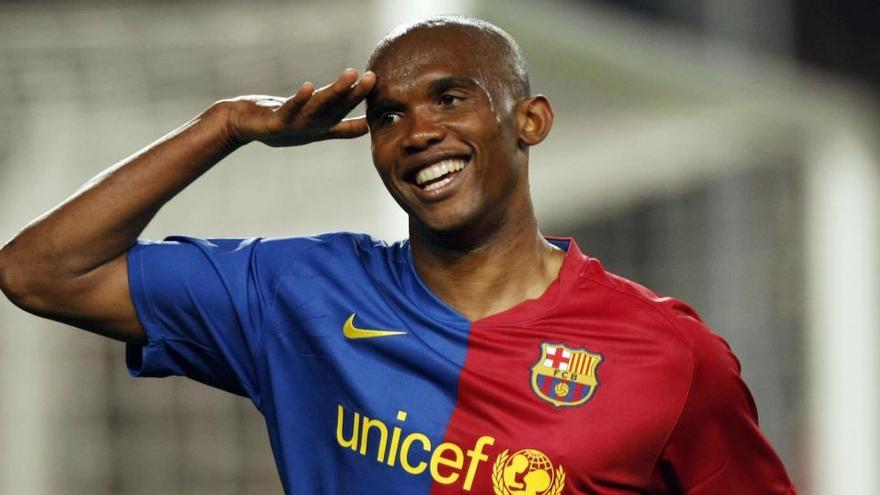 The former player of the Barça Samuel Eto’o has admitted this Monday that he defrauded the Public Treasury more than 6 million euros between 2006 and 2009 in exchange for not going to prison. The prosecution onAdvocacy of the’State, who demanded 4 and a half years in prison, have reduced the sentence to one year and nine months because Eto’o has admitted the facts and has promised to pay the state the amount defrauded. According to the ruling, the player and his representative set up a company in Spain and a Hungary that they managed Eto’o’s image rights and so these gains taxed less. Between the return of the amount defrauded and the fine of almost two million euros, Eto’o has to pay the state 7.9 million euros. However, the player has already paid 2.2 million.

Between 2006 and 2009, Samuel Eto’o, who played for Barça during all those seasons, earned more than 9 million euros in image rights. The main payers of this money were the Catalan club itself and the sports brand PUMA, which rewarded the player in exchange for being able to use their image in promotional activities such as advertisements, posters or commercial videos. But of those 9 million, Eto’o did not testify to his income tax returns in those years. This was acknowledged this morning before the judge of the criminal court number 11 in Barcelona.

He and his representative, José Maria Mesalles, created two companies – one in Spain and the other in Hungary – that exploited the player’s image rights and received payments from Puma and Barça for this concept. Thus, these 9 million went to a current account of these two companies, to which the player had access. In addition, these two companies –Bulk 2002 Business i Tradesports– they taxed this money as company profits through corporation tax, which in the case of Samuel Eto’o had the advantage of paying lower tax rates than if he had taxed it through his statement ofincome tax.

The company incorporated in Hungary, Bulte 2002, taxed its profits at between 10% and 19%, and the company incorporated in Spain, Tradesports, taxed through corporation tax at between 30% and a 35%. According to the criteria of the Public Prosecutor’s Office and the State Attorney’s Office, Eto’o “was the real owner of the image rights assigned to the two companies involved” and, therefore, could not declare them through they.

Deduction of other expenses

In addition, Eto’o also benefited from this business network to declare expenses of his personal life such as interest on mortgage loans, furniture, insurance and supplies corresponding to his homes. Paris, Palma de Mallorca i Barcelona, or the expenses associated with the luxury vehicles that the footballer had. Eto’o declared them as expenses of the company and thus obtained the return of part of the withholdings that had been made to him. As an example of fraud, the prosecution has compiled a grid listing Eto’o’s earnings for image rights and what he ended up declaring. In 2007, for example, the Cameroonian footballer received 3,317,000 euros for these rights and only paid 337,000 in taxes, just over 10%.

“I always did what my father told me”

The former footballer, who is currently the president of the Cameroon Football Federation, he told the judge that he acknowledged the facts, but that they were not his idea: “I acknowledge what I did. But I want you to know, sir, that I only did what my father told me to do. My father was in charge of the child I was then, ”said Eto’o, who was 25 in 2006.

Although he has been sentenced to one year and nine months in prison for four offenses against the Treasury – one for each year of fraud – Eto’o will not end up behind bars. Thanks to the agreement with the prosecution by which the former footballer has acknowledged the facts and has agreed to pay the defrauded fee and the fine imposed, the public prosecutor has asked the judge to suspend the footballer’s sentence for being a minor 2 years and for not having a criminal record, requirements set by law for this suspension. The judge agreed.

This amount, of which he has already paid 2.2 million euros, will have to be paid together with his representative, José María Mesalles. The judge ordered them to pay the money jointly and severally, that is, there is no established proportion of how much each one should put into it. Samuel Eto’o’s defense has submitted to the court a payment plan according to which Eto’o will make a monthly payment from October 2022 to the same month of 2027. This plan is guaranteed by a player’s property.