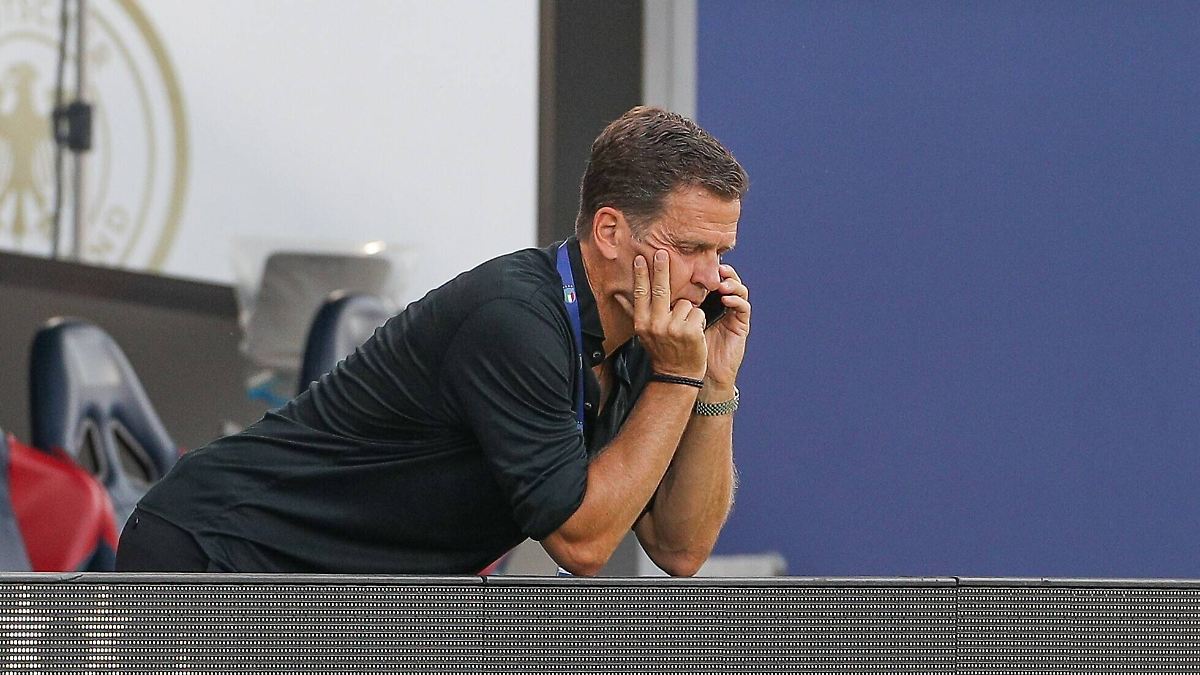 The World Cup kicks off in Qatar in November. For years, the host has been criticized for numerous human rights violations. Dealing with members of the LGBTIQ+ community is also questionable and makes DFB managing director Oliver Bierhoff doubt the award.

DFB managing director national teams and academy Oliver Bierhoff has strongly doubted the contract for Qatar for the World Cup. “How was FIFA able to give the award to this country?” asked the 54-year-old in response to research by RTL/ntv in connection with the treatment of homosexuals in the emirate. Confronted with the treatment of members of the LGBTIQ+ community in the desert state, which was revealed in the report, he appears thoughtful and reveals his thoughts on the World Cup, which has been criticized.

“On the one hand, I always thought at the beginning, ‘Who owns the football? Does it only belong to Europe, does it only belong to South America or does it belong to the whole world?'” says Bierhoff. At first, the idea of ​​playing football around the world still seemed right to him, but “the world has also changed,” says Bierhoff, adding: “The requirements, the demands are different, including the fans and the people. In this respect, it has to you have to take that into account.”

Referring to the LGBTIQ+ person in his circle of friends, Bierhoff has serious concerns about recommending her travel to the emirate for the tournament. The distantly well-known person also comes “from the Arab world” and lives “constantly in fear of being caught,” says the DFB managing director. “I mean, the bad thing is of course the social ostracism that you can already hear,” Bierhoff continues: “But the other thing is when you’re afraid in your life and then you’re patronized by a state institution Of course that’s dramatic.”

Christian Rudolph considers Bierhoff’s words to be correct and sensible. Rudolph is a member of the national board of the LSVD (Lesbian and Gay Association of Germany) and head of the DFB contact point for LGBTIQ+ issues in professional and amateur football. At the beginning of June he sat with other representatives, including from the fan association Football Supporters Europe, at a panel discussion in Herzogenaurach. The national football team and Bierhoff were among the audience. “The least we demand is that the DFB clearly names the problems and doesn’t look away,” says Rudolph in an interview with ntv.de and also wonders how safe traveling to the World Cup in Qatar will be. “If things like holding hands are already punishable, that doesn’t give a sense of security.”

“Red card instead of rainbow – homosexuals in Qatar”

RTL shows the report “Red card instead of rainbow – homosexuals in Qatar” in a night journal special on the night of June 23 at 0.20 a.m. as part of the “Diversity Week”. RTL Aktuell will show the first excerpts of the report by Jonas Gerdes and Timo Latsch on Wednesday, June 22 from 6:45 p.m. On Thursday, June 23, ntv will show the report from 3:40 p.m. Afterwards it will also be shown on ntv.de and RTL+.

Bierhoff does not want to make a general travel recommendation for Qatar for gays and lesbians either. “It’s difficult. I don’t know,” says Bierhoff when asked: “I think everyone can only decide for themselves whether they see it as a risk.” The DFB managing director expresses his hope that there will be “a certain bell” for the tournament “for a certain period of time” that will guarantee security.

The 54-year-old takes a correspondingly critical view of the award of the World Cup to Qatar, in which human rights issues were obviously not a criterion: “How could FIFA award the award to this country? You simply have to criticize that, in the first point, only maybe on stadiums or other points, or of course commerce and not these aspects, like human rights or other social issues.” The DFB must also act on a change in the award criteria and make it clear “that the next award will only happen to countries in which such things do not happen”.

In recent months, the DFB has increasingly discarded its reluctance to play in Qatar. Only at the beginning of the week did the new DFB President Bernd Neuendorf describe the circumstances surrounding the FIFA flagship as “questionable” and thus contradict FIFA President Gianni Infantino. The Swiss, who lives in Qatar, has already called the World Cup, which begins in November, against all criticism, “the best World Cup of all time”. Nothing unusual at tournaments or events of this magnitude. You know no step backwards.

Klaveness as a door opener

Criticism of Qatar has rarely been heard from officials. The President of the Norwegian Football Association, Lise Klaveness, acted as a door opener at the FIFA Congress in Doha this spring. Her courageous and courageous appearance in front of the public was in stark contrast to the usual praise of world football’s governing body at such events.

“If you award a World Cup to countries where there are bans against the LGBTQ lifestyle, football must ensure that all fans and all players have access to tournaments,” she said in an interview with SID after the congress said and doubted that this would succeed.

At the beginning of June, the official LGBTQ+ fan organization in Wales, the “Rainbow Wall”, announced that it would not be traveling to Qatar, and a little later the Welsh association announced a partial boycott of the tournament. Despite Wales’ first World Cup participation since 1958, some employees will “not travel to the tournament” due to discrimination against homosexuals in the desert state, as association boss Noel Mooney told the BBC.

Homosexuality is a punishable offense in the desert emirate. Article 285 of the Criminal Code states: “Anyone who sleeps with a man over the age of 16 without coercion, coercion or cunning shall be punished with imprisonment for up to seven years.” Islamic law even allows flogging and the death penalty.

According to Emir Tamim bin Hamad Al Thani, all guests are welcome in Qatar – regardless of their sexual orientation. “We’re not preventing anyone from coming to Doha,” he said during a visit to Berlin in May. “But we expect and want people to respect our culture.”