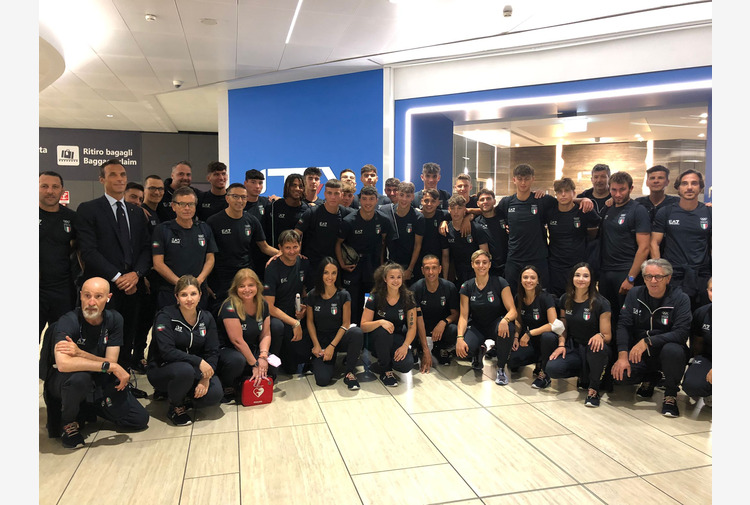 Azzurri on an Airbus A350 / 900 ITA Arways, partner of Coni, named after “Marcello Lippi” ROME (ITALPRESS) – The Italia Team flies to the Mediterranean Games in Oran 2022. The Italian team, captained by the Olympic champion of karate, Luigi Busà, standard-bearer with Diana Bacosi in the opening ceremony on Saturday 25 June, left for Algeria to take part in the 19th edition of the multidisciplinary event reserved for Mediterranean countries, scheduled in the North African country until 6 July. About 180 Azzurri, the first group of the 370 expected in Algeria in total, boarded at Fiumicino airport on an Airbus A350 / 900 ITA Arways flight, partner of Coni, named after “Marcello Lippi”, in the presence of the Secretary General Carlo Mornati, who will join the team on Saturday. “In Oran we will have an institutional representation led by the Minister of the Interior Luciana Lamorgese and the Undersecretary for Sport Valentina Vezzali. Algeria is of great importance from a geopolitical point of view and Italy wants to best honor these Mediterranean Games, which represent one of the main commitments of Coni in 2022 “the words of Mornati during the presentation of the Rome-Coni airport agreement for travel facilities for athletes. Among those who started today were the under 18 national football team, the men’s and women’s volleyball selections, the youth water polo, the ‘Fairies’ and the gymnastics blues, the wrestlers, including the Olympic bronze medalist Abraham Conyedo, and the national teams of badminton, bowls, karate, boxing, table tennis and sailing. The other standard-bearer of Italy Team, Diana Bacosi, will start on Saturday together with the other Olympic medalists in skeet shooting and the Azzurri in judo, handball, tennis and target shooting. – photo Italpress – (ITALPRESS). gm / red 23-Jun-22 14:13