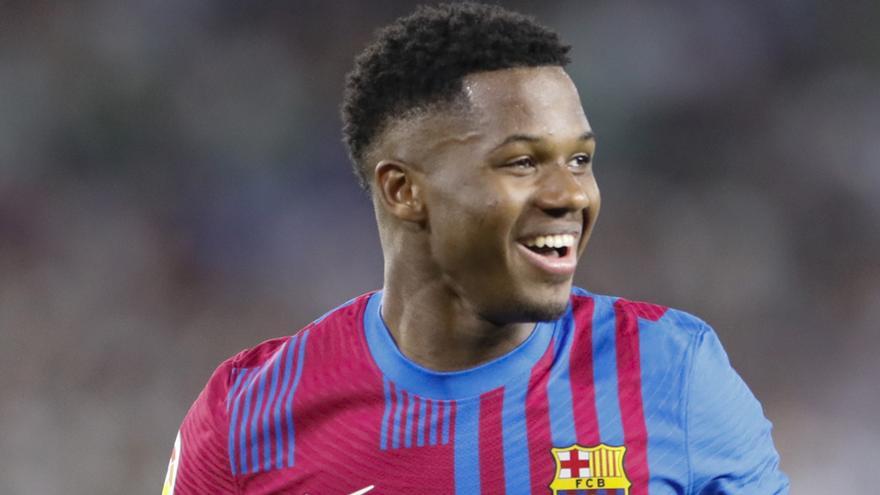 Ansu Fati was summoned by Luis Enrique for the UEFA Nations League dispute. He didn’t play a minute. In reality, the Spaniard wanted to see first-hand how the footballer was mentally and physically. As far as the first point is concerned, everything was perfect, but the care with which he managed his presence in the national team was the product of the care with which Xavi had also managed his prominence in the first team since receiving medical discharge. There is some concern in the club and in the medical services about his physical condition.

It was the journalist Achraf Ben Ayad who set off the alarms through his Twitter account: “He is not yet ready to compete at the highest level, he is far from ready. Barça believes that it made a serious mistake not operating”. SPORT has been able to confirm that the concern is real and that the player has undergone various tests to assess the player’s physical parameters in extreme situations. Well, in all of them he does not reach the necessary level for high competition compared to the results obtained before his long journey in the desert due to injuries. Has lost endurance, explosiveness, speed and powera fact that keeps the medical services of the Blaugrana entity in suspense.

had to have surgery

In fact, there is some fear that he will not recover one hundred percent of all the physical virtues that made him an absolutely differential footballer. Obviously, talent and the ability to score goals are virtues that he keeps intact, as evidenced by his six goals scored in fifteen games this season, divided into three different stages. His last goal was against Betis, in the second game after reappearing after 21 games out.

Ansu, after overcoming four operations, decided not to go through the operating room a fifth time, despite the fact that this was the advice of the medical services. The youth squad preferred to opt for a conservative, less aggressive treatment, but which, apparently, has not given the expected results because Ansu Fati is having a hard time recovering his form prior to the injury carousel. To the point of fearing that he will not be the same as before. That is the big concern.

A month of vacations

Despite everything, the player will have a month of vacation to unwind, but, at the same time, continue working on his physical and mental recovery. The objective is for him to arrive at the pre-season with his batteries charged and willing to undergo a preparation with which to return to having forgotten sensations and, above all, make the current physical parameters take a qualitative leap and Ansu Fati can accompany his enormous talent with the explosive physique with which he accompanied all his plays.

Xavi sees him start next season

When Xavi is questioned about his ideal eleven for next season, the first in which he will start from the start as owner of the Camp Nou bench, Ansu Fati always appears in it. The Egarense has blind confidence in the youth squad, whom he awaits with open arms after a season in which he has practically not been able to count on him. He has only done it in small drops, enough time to confirm what he already knew, that the goals are falling.

In fact, that is a virtue that the coach needs to promote in the squad. Hence, he needs like water the signing of Robert Lewandowski, but also the sum of the many that the youth squad can contribute. This season he has scored six goals in his fifteen appearances, figures that, considering how little he has played, are quite remarkable. The 85 goals scored this year by Barça are a figure far removed from what a champion team should show. We have to go back to the average of 150 goals scored in the last decade and that happens with players like Ansu Fati. Xavi is convinced that, with a good preseason, the player will return to his level.