Mario Götze at Eintracht Frankfurt: Smiling in a new phase of life 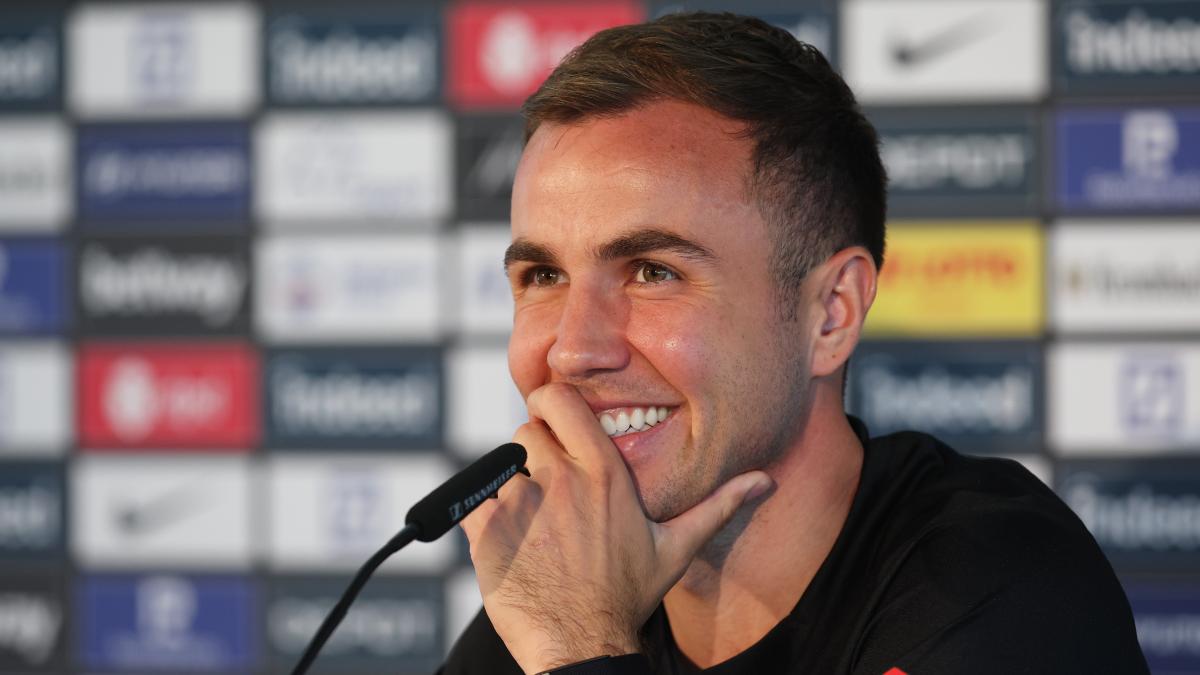 Smiling into a new chapter in life

During his presentation in Frankfurt, Mario Götze is relaxed and relaxed. The 2014 world champion says he doesn’t feel any particular pressure. When asked about a possible participation in the World Cup, the 30-year-old becomes clear.

KIt’s been almost six weeks since there was great jubilation around Eintracht. The day after winning the Europa League, around 200,000 fans lined the streets of Frankfurt and celebrated the winning team in a motorcade.

On Tuesday morning there was renewed cheering, albeit on a smaller scale: When Mario Götze, the Bundesliga club’s prominent addition, was the first to step onto the pitch at the start of training, he was celebrated by around 1,000 fans. There was applause and shouts of “Mario”. “I’m very happy,” said Götze at a press conference after the 90-minute session.

“It’s a kind of appreciation”

He sat in front of the podium in a black shirt. He seemed relaxed, sipping from a bottle of water in front of him between each question. Many factors, such as the club, the fans, the league and the discussions with those responsible, would have been decisive for the change from Eindhoven to Eintracht, said Götze. He was asked whether he, who scored the decisive 1-0 win against Argentina in the 2014 World Cup final, felt any particular pressure or sensed the high expectations placed on him. “I mean, in the end it’s a kind of appreciation and a positive thing. It speaks for what I’ve achieved,” said the attacking midfielder: “But now the focus is on the club, the league and the challenges with Eintracht. Everything that has happened in the last few years is pretty good. I just want to prove something to myself, that’s the most important thing for me.”

Götze, 30 years old, married and father of a son, wants to look ahead – and no longer to what made him so famous: his World Cup goal, his World Cup title, his many good performances, which above all contributed to his first heard at BVB. Later with Bayern and after his return to Dortmund, he was rarely able to shine. After the end of the 2019/20 season at BVB, he moved to PSV Eindhoven. Under coach Roger Schmidt, who is now coach at Benfica in Portugal, and away from home, he flourished again.

Eintracht had already asked him last year. But then, he said on Tuesday, he wasn’t ready for a change. Well yes. He was impressed to see how Eintracht had developed in recent years.

“The cup win (2018, d. R.) and winning the Europa League speak for the club, for the quality of the team and a top character,” said Götze, who sees his strengths in the last third on the pitch: “I want to try to find gaps or tear to help the team and to make my contribution.” It is now important to make contact quickly and to find out what he should and can do against and with the ball within the system.

Götze smiled surprisingly a lot at his introduction. He seemed relaxed, at peace. When he was asked about a possible World Cup participation, he didn’t think long about the answer. “The most important thing is that I get better and that we perform well as a team. Everything else is not an issue. My focus is on the club and the tasks with Eintracht,” said Götze, who let it be known that national coach Hansi Flick was one of the many well-wishers after the announcement of his move to Eintracht. Götze, who wants to move to Frankfurt, played his last of 63 international matches in November 2017 against France (1-0).

In the coming days, Götze will train with the team in Frankfurt before heading to the training camp in Austria on July 9th. The first competitive game takes place on August 1st in the DFB-Pokal at second division promoted Magdeburg. Four days later, the SBU will play the opening game of the league against FC Bayern – the club against which Götze played his last Bundesliga game in May 2020.