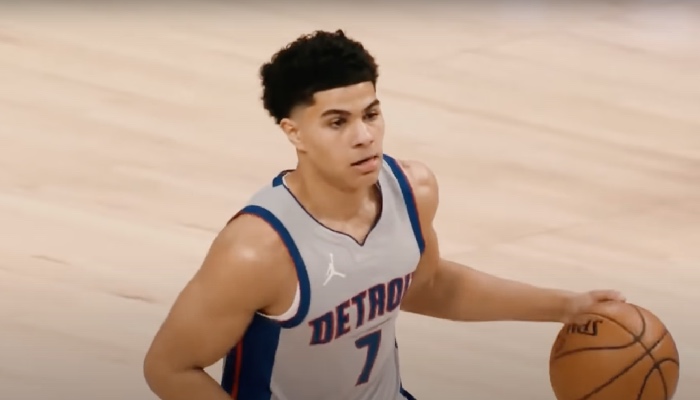 Killian Hayes may be living his last days in the Pistons jersey, since his future could be upset during the draft on Thursday. If he is traded, fans of a prestigious franchise are boiling at the idea of ​​​​recovering him. Like what, he keeps an interesting rating!

Upon his arrival in the NBA, Killian Hayes was seen as a great hope, a leader with the potential to win and carry a team… But after two seasons with the Pistons, the enthusiasm is much less concerning him. While he had his chance, with 58 starts in 92 games played, he did not really live up to expectations or even show encouraging progress.

So inevitably, with the approach of the draft, his place no longer seems assured in Detroit. The leaders of Motor City, who have the 5th choice, could well throw themselves on Jaden Ivey or Shaedon Sharpe, two particularly talented backs who would shine alongside Cade Cunningham in the starting 5… A swap could therefore be in order for the French, and on the side of the Nets, some would like to see him land.

An under the radar player I want the Nets to trade for: pic.twitter.com/vCAHyfE2S9

“If the Mavericks can get him, he and Doncic will be unstoppable”

Despite a disappointing start and below his abilities, Killian Hayes is still only 20 years old and the future ahead of him. In Brooklyn, and this would be even more true in the event of Kyrie Irving leaving during free agency, the young tricolor leader could bring a lot in the offensive creation, but also on the defensive level. Fans have mixed feelings about this idea:

Nigga posted this shit and now I deadass think he’d be a good pickup. Did a deep dive and I really like what he could provide https://t.co/C74qya8KVG

He posted this, and now I seriously think he’d be a good recruit. I immersed myself in his game and I really like what he could bring.

I will pass on this idea. Killian is too big a project for my taste, but it has potential.

In Brooklyn, Killian Hayes would become immediatelyone of the best defenders and one of the best passers in the squad, and he could learn alongside Ben Simmons. An almost ideal situation for a player thrown into the deep end good too fast.