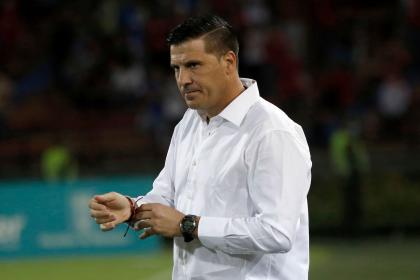 Atlético Junior outlines his team to seek revenge in the Betplay League this second semesterafter being eliminated in the last home runs.

The team is still waiting for a response in the event of Miguel Borja, involved in negotiations with River Plate, and of that the technician Juan Cruz Real did not advance details.

Other things are much clearer: “The only thing confirmed, so far, is the return of César Haydar, who was playing in Brazil. We are still looking for a right center back, a central midfielder, hopefully these two foreigners, and a right winger.”he said at a press conference.

That and the two discards for this new season are clear: “Marlon Torres is someone I love very much as a player and also as a person, but it is not true that I have spoken with him or that I have asked for it. The main reason is that I I know the situation that America finds itself in, he is a player that I appreciate a lot but we are looking for a foreigner,” he explained.

And on the topic that many talk about in Medellin, he was also blunt: “nobody has mentioned Baldomero Perlaza to me, I think that in that position we have enough alternatives. We have more weaknesses in other positions that we are looking for,” he concluded.