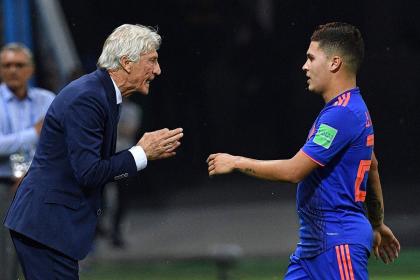 In a recent talk with Conmebol, the Colombian midfielder Juan Fernando Quintero referred to what his career has been and the way in which Joseph Pekermanformer Colombian coach, and Marcelo Gallardo, his coach at River Plate, have marked his life. The ’10’ did not make up anything nor did he spare praise to talk about both. He said that he lived a stage of rebellion in the tricolor and that his “father” of him in football knew how to deal with it.

“He has been like a father to me since I was 19 years old when he took me to the National Team“, ‘Juanfer’ mentioned about the Argentine Pékerman, who led the Colombian process towards Brazil 2014 and Russia 2018. Precisely, Quintero referred to the match against Poland that ended 0-3 and in which he was doubtful. This Friday June 24 marks exactly four years since that commitment that the tricolor won with goals from Mina, Falcao and Cuadrado.

“The day before that game I had not trained and I was not going to play. It’s not that I was rebellious, I just told him things that I felt and that I could do for the team. The next day he tells me that I am going to play and he would say that it was the best game in the history of Colombia in a World Cup. We beat Poland 3-0 with a lot of prominence. That talk we had served to show character, for me personally in that game it went very well“He mentioned about the rebellion that he brought to the surface, with the intention of being in the plans that day.

On the other hand, Quintero bare his heart and said that he not only owes a lot to his “father” in football but also to Gallardo, who has accompanied him in recent times and with whom he has known how to shine at the club level. “Marcelo is a friend, regardless of everything at work he does not give you anything, he has marked me in my career, I found my place in the world as they say and he exploited many of my qualities, he made me a better player. Always based on what is best for the team and that is reflected in his history at the club.”