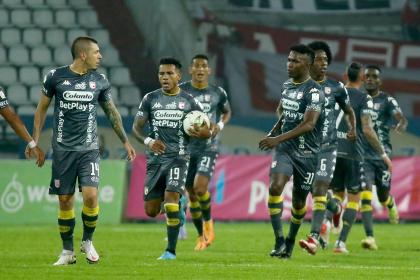 Independiente Santa Fe begins to assemble with a view to what will be the second half of 2022. Alfredo Arias intensively prepares the preseason with more casualties than arrivals, but with two additions already closed in the defensive zone. The need that Arias has is to put together a reliable defense, and for that he tied Geisson Perea, from Club Pachuca in Mexico.

Guillermo Almada notified the Colombian defender, former Atlético Nacional, that he will not have him, despite the fact that Geisson Perea wanted to continue in Mexico. A savior appeared like Independiente Santa Fe who seeks to arm himself in the best way, especially in his back against sensitive exits.

For now, Independiente Santa Fe confirmed in a statement the departures of Yulián Anchico, Francisco Meza, Harold Gómez, José Ortiz and Jerson Malagón, all of whom have defensive functions, although Anchico can play as a right back or brand midfielder. In turn, Ezequiel Aguirre and Fernando Coniglio of little regularity will go unnoticed.

The Santa Fe fans don’t want any more bets with unknown international players. In the defensive zone, there is the example of Horacio Salaberry, Uruguayan, who, although he scored goals with his free kick and his aerial game, did not provide certainties within the cardinal club. Also, Iván Villalba, a Paraguayan center back who added six games.

The defenders also join an extensive list with players like Franco Razzotti in midfield, Denis Stracqualursi, Matías Castro, Fernando Coniglio, Ezequiel Aguirre, Rubén Bentancourt and Marcus Vinicius who did not contribute what was desired in the cardinal’s box becoming bets without results. Thus, the first foreigner arrives in Santa Fe at the request of Alfredo Arias.

Recently, he played 17 games for Uruguay’s River Plate, scoring one goal. He is expected to perform at the central defense of Santa Fe in the face of multiple departures from defenders. Martín Charquero, a Uruguayan journalist said, ‘he leaves River Plate and joins Independiente Santa Fe de Bogotá’, he also notified that the condition in which he arrives is a loan of a year and a half. His services will be until December 31, 2023.