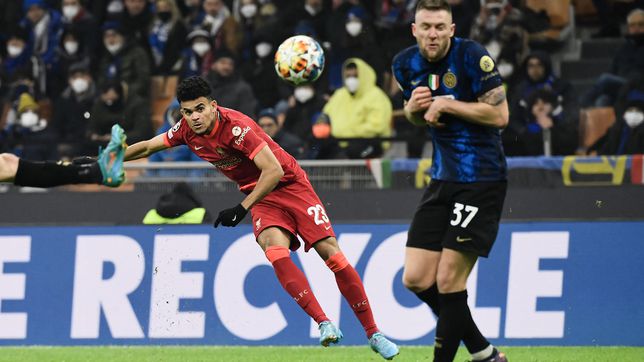 Inter Milan was able to sign Luis Díaz and discarded him. In 2019 and before the Copa América in Brazil, the Colombian winger who had been a figure in the Junior de Barranquilla was offered to the Italian team, which although he had it in his plans, he preferred to hire the Chilean Alexis Sánchez. A business that the Nerazzurri did not know how to take advantage of and that Porto did, who bought it for 8 million euros, enjoyed it for a long time and He sold it for 45 million plus variables amounting to 15 million.

Sabatino Durante, FIFA agent, spoke on 1 Station Radio and questioned the bad decisions they have had in Italian football when investing. The soccer player representative was in charge of bringing the name of Luis Fernando Díaz closer to Inter, but they did not make the decision to hire him. Just as they did not sign the peasant, they also did not take the risk with Rodrygo and Vinicius Junior, who had just become champions of the Champions League with Real Madrid.

“I proposed Luis Díaz in May 2019, before the Copa América, but Inter preferred to bet on Sánchez. I took him to Porto for 8 million dollars, last January Klopp wanted him to Liverpool for 57 million pounds. I repeat: ideas are lacking, not money. With the 85 million invested in Lukaku, what has Inter won besides the Scudetto?

“It is always said that in our country the problem is the lack of money, but it is not like that: there is a lack of ideas. Inter took Lukaku for 85 million euros, and at the time, with that money, they took Rodrygo and Vinicius Junior, but they didn’t have the courage to take a risk with two children, unlike Real Madrid who trusted both of them and now find themselves with a fortune five times higher than the purchase price. In Italy we never learn”, he added.

Since the refusal of Inter Milan, Luis Díaz has played 151 games in three seasons in Europe. The player has participated in 71 goals, scoring 47 goals and assisting in 24. Within his record, the Colombian winger has added 7 titles, 5 with Porto and 2 with Liverpool. Now the player enjoys his vacations and prepares for a new year with the Reds in search of the 5 titles for which they will fight.