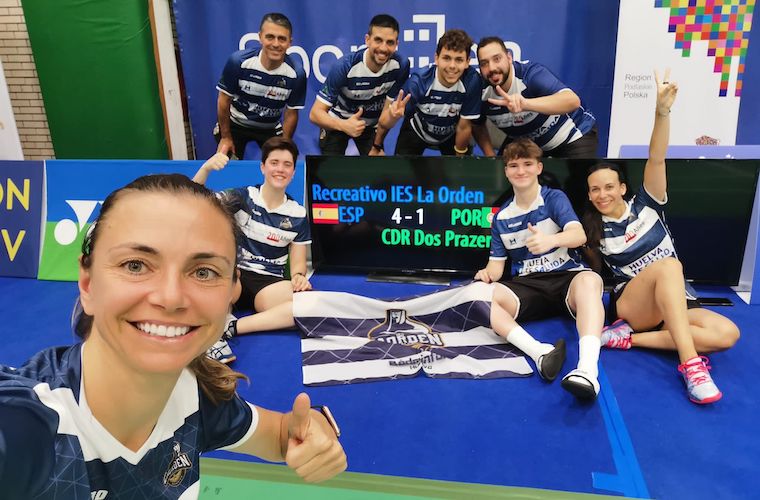 S. D. solvent victory of Badminton Club IES La Orden (4-1) before him CDR Dos Prazeres de Portugal on the first day of the European Club Championship which is disputed in Bialystok (Poland). The people from Huelva dominated with authority a match in which only victory in the men’s singles held them back.

The confrontation began with mixed doubles with the brothers Eliezer and Haidee Ojeda on the one hand, and Angelo Silva and Mariana Chang for another. The victoria was one of the from Huelva in 28 minutes in two sets (21-14 y 21-16).

They then jumped onto the track debutante Alejandro Pérez and the Portuguese Pedro Portelas. balanced match that he opted for the Portuguese side, the only one who could win. Despite playing a good game, Pérezwhich was noted first sleeve quickly (21-9), fell in the next two (21-23 and 23-25), with which Portelas established the tie at that moment.

The second point of Huelva came from the hand of the Portuguese Telma Santoswhat beat clearly to Luisa Faria by 21-6 and 21-7 in the women’s individual duel.

The victory of IES La Orden stayed sealed in the men’s doubleswhen Adrian Marquez and Eliezer Ojeda they left the duo formed by Duarte Nuno Anjo and Angelo Silvawho were defeated by 21-14 y 22-20. The icing, that is, the 4-1, established by Haidee Ojeda and Laura Santoswho won the women’s doubles after beat the Portuguese Mariana Chang and Claudia Lourenço by a double 21-8.

The second match of the group stage this will be played Wednesday (10:00) before him Frogner Il Norwegian and in case of winning the IES La Orden would ensure a place in the quarterfinals. On Thursday they will play the last match of the first phase, possibly with the first place at stake, against the local team of Polish UKS Hubal Bialystok.