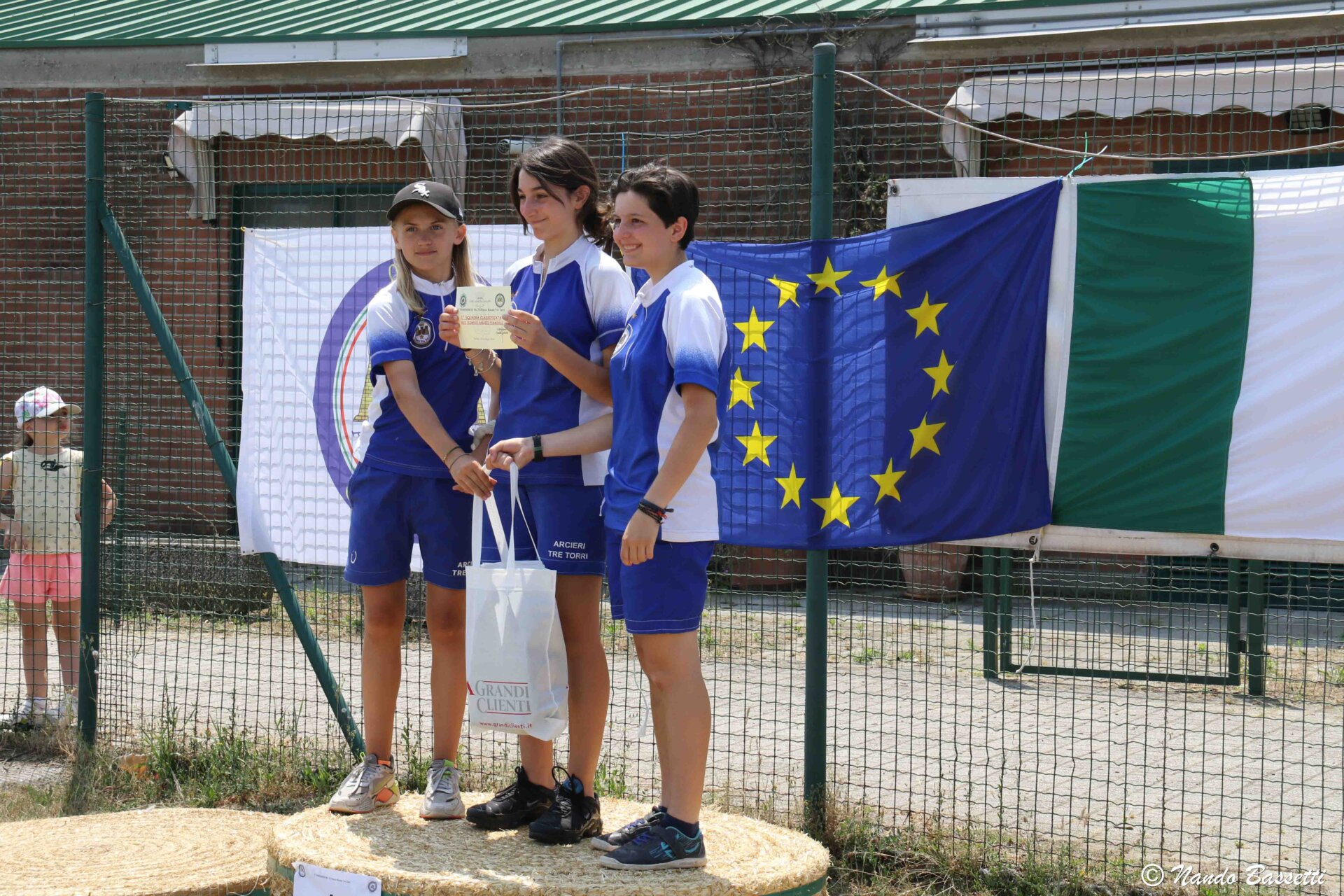 Two busy days for the Cardano al Campo club, which organized its 2nd “70/60/50/40/25 m 72 Frecce Round Tre Torri” at the “Danilo Colombo” municipal sports field in Turbigo, while three of the its top athletes were summoned to the “Coppa Italia delle Regioni” in Paestum to represent Lombardy.

The competition of the Tre Torri archers in Turbigo

For once the wind was a precious ally on an archery range, because the temperatures last weekend at the Via Plati facility in Turbigo were really hot. The race was able to take place regularly, without too many delays, thanks to the fact that the structure guarantees a good microclimate at the local level, despite the lack of trees inside it. The continuous movement of air, which is normally not very favorable for an archery field, has, in fact, alleviated the climatic situation, otherwise not very favorable, given the decidedly high temperatures.

The mercury column was not the only one to score high scores, because even the archers of the Cardanese company in the competition did well, despite the unfavorable weather, taking home the usual long list of medals. There are six podiums all in white and blue, among which the three treble of the Olympic bow girls (Gaia Micalizzi, Delia Ferrari and Erika Baron), the bare bow boys (Luca Milani, Lorenzo Colombo and Gabriele Nervei) and the senior compound bow stand out. (Francesca Vailati, Anna Puricelli and Margherita Papa). First place in the relative class category also for Alessandra Moltrasio (female senior Olympic), David Baron (male master Olympic), Giovanni Macchi (male very young Olympic), Alessio Rudoni (male senior naked arch), Laura Nava (female master naked arch) and Francesco Vailati (male compound master), who just slightly beat his partner Giuseppe Martucci. In the men’s senior compound, second and third place respectively for Fernando Vicini and Emilio Laudari, while Alfonso Stanzione stopped in ninth place. Silver also for Andrea Santinello (male senior Olympic) and Elena Cavalieri (female Olympic female students), while her partner Sofia De Luca finished fourth, just 3 points from the podium. Bronze, on the other hand, for Martino Calò (male Olympic master), who gets behind his teammates Marco Rasi (fourth), Mauro Tonelli (tenth) and Rocco Rasulo (eleventh). Third also Carlotta Clivio (very young female Olympic), who got behind Diana Gerardi by a few points, while Julian Kungna finished in sixth place among the boys in the Olympic arc.

Good news also from the even hotter field of Paestum (SA), where the three called up of the “Arcieri Tre Torri” for Lombardy have well defended the colors of the regional team, all accessing the clash phase after the qualification arrows. Let’s start with Matteo Uggeri (senior men’s compound, Star 3 race – country shooting), who finished fifth in the classification pitches, with an excellent 388, just 5 points from the top three, all tied at 393. Same placement for him also in the clash phase, where he lost only in the quarterfinals against Roberto Sottile, the winner of the competition.

Good performance in the “Star 2 – youth target shooting” for Marta Corini, victim of a technical problem at the bow, which forced her to stop in sixth place in qualifying, with 579 points, just 5 points from the bronze and 4 from classy silver. Gritting her teeth, Marta, who competed among the Olympic bow students, tried to take home the first fight, but she had to give in to the arrows of the athlete from Umbria. Isabella Salmoirago also defended herself well (female senior, barebow, Star 3 competition – country shooting), who, due to the heat, finished the qualifications in 13th position, trying to defend access to the preliminary heats with her nails, but had to surrender for 6 points to the athlete from Friuli, ending the adventure in 9th place.

The arrows of our archers are already hot, even though they are only at the beginning of a season full of events, because as early as next weekend the “Tre Torri Archers” will be involved en masse at the Regional Campaign Championship of Valmorea (CO). The following weekend will be held the National Final of the “Pinocchio Trophy”, which will see our Samuele Barigozzi committed, always defending the colors of Lombardy. On 10 July, the regional target archery championship – compound division will be held in Vimercate, which will also host the Lombardia bare bow cup the following week, the same weekend as the “ParaArchery Italian Targa Championship” in Lanciano (CH). From 22 to 24 July, the Italian Campaign Championships (Castellarano, RE) will be held, the last appointment before the August break, followed by the Italian Targa Championships in Oderzo (TV), which will also host the celebrations for the 60th Year from the foundation of the Italian Federation. The outdoor season will then end with the 3D Championships at regional (Castello Cabiaglio, VA, 3-4 / 9) and national (San Vero Milis, OR, 23-25 ​​/ 9), waiting to resume with indoor competitions.