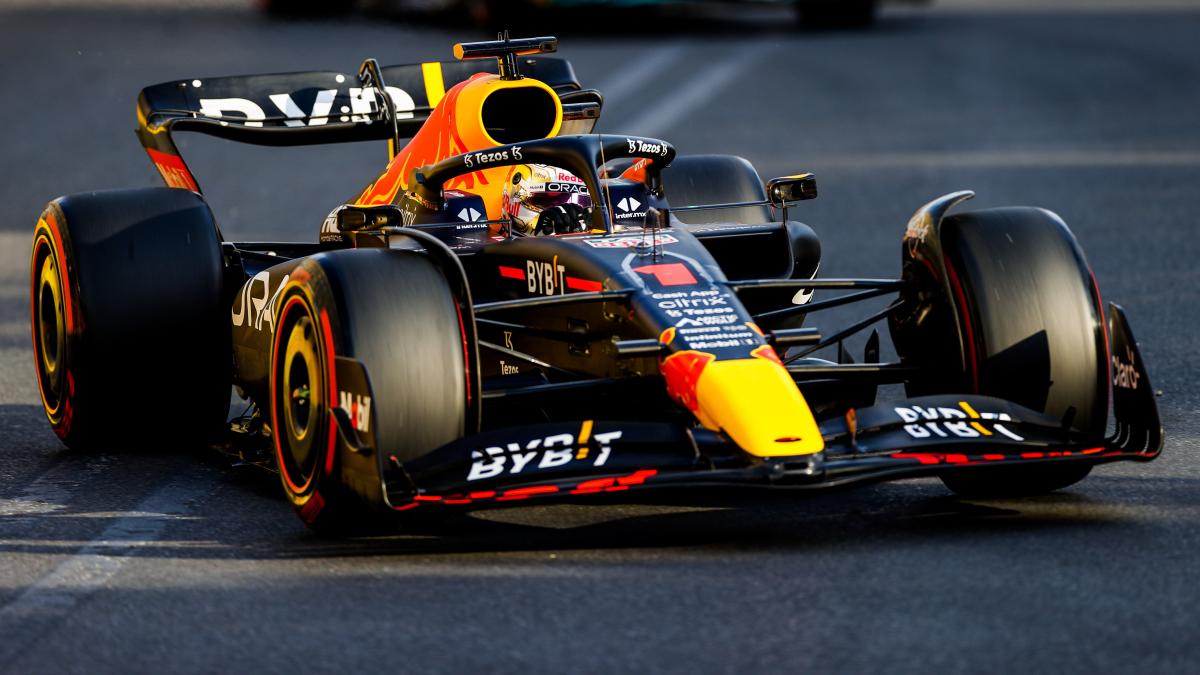 The frustration was great in the Ferrari camp. Both cars had to quit the Formula 1 race early on at the Azerbaijan Grand Prix due to major problems – and gave up the lead without a fight. The Red Bull team was once again the big beneficiary of this.

EIn the Ferrari fiasco on the streets of Baku, Max Verstappen paved the way to fifth Formula 1 victory of the season. The world champion extended his world championship lead at the Azerbaijan Grand Prix on Sunday after Ferrari star Charles Leclerc had to give up as the front-runner with an engine failure. Second, Sergio Pérez made the third Red Bull double win of the year perfect. They were followed by the Mercedes duo of George Russell and Lewis Hamilton, because Carlos Sainz in the second Ferrari also did not reach the finish line due to an early defect.

“It hurts. We need to look at it to learn from it. It’s totally disappointing. It’s hard to understand,” said Leclerc after the next major setback in the title race. A driving error in Imola, a broken engine in Barcelona and a strategy breakdown in Monaco had cost him many points recently. In the overall standings, Leclerc fell back to third place and is now 34 points behind Verstappen.

The Dutchman increased his tally to 150 points with a superior drive to his 25th win of his career. His team-mate Pérez is now 21 points behind in second. “It was a super day for us. Maybe it was a bit of luck with the retirements, but our car was very good,” said Verstappen.

Sebastian Vettel secured his best result of the season so far with a strong sixth place in the Aston Martin. Mick Schumacher, who had to settle for 14th place in the Haas, experienced another disappointment.

For the fourth time in a row, Leclerc had placed his Ferrari in first place. However, his pole positions hadn’t brought him any luck in the end. Neither in Miami nor in Barcelona or Monaco could he convert the starting advantage into a win. And this time the lead was quickly gone. Buoyed by his triumph in Monte Carlo and the extension of his contract until 2024, Pérez overtook Leclerc before the first corner.

Verstappen also got off to a good start, but was no longer able to squeeze past his Ferrari rival. That’s how it went on the first rounds. Verstappen appeared in large format in Leclerc’s rear-view mirror several times, while Pérez managed a small cushion in front.

Sainz then caused the first turbulence. The fourth-placed Spaniard suddenly rolled out in his Ferrari. Diagnosis: hydraulic damage. The virtual safety car briefly slowed down the field for the clean-up work. Leclerc and some other drivers used this for a pit stop.

In contrast, both Red Bull fell by the wayside. Verstappen was allowed to pass Pérez to the top without a fight so as not to lose too much time on Leclerc, who was rushing with fresh tires. When both Red Bull drivers came to the garage for service, the Ferrari star took the lead.

The next drama for the Scuderia followed a little later: As in Barcelona, ​​smoke rose from Leclerc’s engine. Desperately, the 24-year-old radioed to the pits on lap 20: “The power is gone.” Leclerc dragged himself back into the pit lane at a snail’s pace, climbed out of the car and waved at the audience with a sad expression. “I just can’t find the right words to describe it,” he confessed shortly afterwards on the Sky microphone. The way was finally clear for Red Bull’s next double success.

The eighth round of the season was hard work for veteran Vettel. Starting from ninth after a strong qualifying session, he was on his way up when he missed the corner during an overtaking manoeuvre. But Vettel kept fighting and used a bold tactic with just one early pit stop. That paid off in the end.

The working day was again frustrating for compatriot Mick Schumacher. As the last player after qualifying, the 23-year-old was hoping for some chaos in order to finally be able to capture his first championship points. He drove at the end of the field without a chance and was unable to counter the recent growing criticism after his series of accidents.

Meanwhile, Michael Schumacher has lost another of his Formula 1 records. Thanks to his start in Baku, Fernando Alonso is now the driver who has had the longest time between his debut and his last Formula 1 race. The Spaniard contested his first Grand Prix in Australia in March 2001, 7770 days ago at the Azerbaijan Grand Prix. The 40-year-old Alpine driver surpassed Schumacher’s previous record by seven days.

The seven-time world champion Schumacher completed his first race in Formula 1 in August 1991 in Spa-Francorchamps, Belgium. After his comeback at Mercedes, he finally ended his dazzling career in November 2012 at the Grand Prix in Brazil. With that he came to 7763 days between debut and last race start.

Alonso can still extend his record before the season finale in Abu Dhabi in mid-November. His contract expires at the end of the year. The two-time champion had recently assured that he wanted to continue his career in Formula 1 afterwards.