“E-sport goes to another level”: when the Karmine Corp fills and sets the Accor Arena ablaze 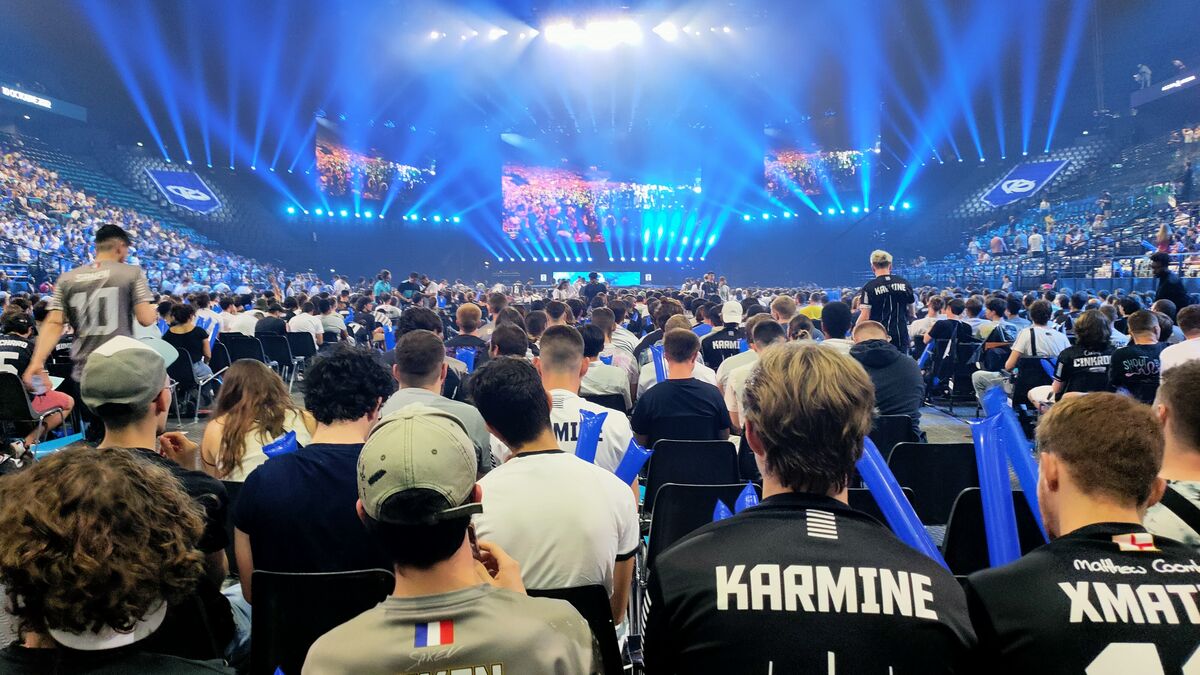 A first in many ways. Tuesday evening, it was not music fans or basketball supporters who flocked to the Accor Arena, but thousands of ultras who came to defend the colors of their team, Karmine Corp, and their discipline, l e-sport. In a sold-out venue, 12,000 spectators took their places for the second edition of his “KCX”, a show lasting more than 3h30, hosted by the two leaders of the organization, the streamer Kameto and the rapper Prime. On the program, two official matches of “Valorant” and “League of Legends” interspersed with a musical interlude.

Several hours before the doors open, hundreds of white and black KCorp jerseys are already parading on the forecourt of the mythical theater in the 12th arrondissement of Paris. These lucky people snatched places for a minimum of 40 euros on June 10, eleven days before the event. Inside, the mood begins to rise. The first part of this KCorp-stamped evening is dedicated to a game of “Valorant”, a first-person shooter (or FPS) video game, which pits Karmine against the Vitality team.

An atmosphere worthy of a football match

While waiting for the arrival of the players, the songs of supporters follow one another. From the famous “Paris! Paris” at “Karmine! Karmine! » accompanied by blue clapperboards in the colors of the Blue Wall, the association of KCorp ultras, everything is similar to the atmosphere of a football match. “It’s nice to be the first ultras,” enthuses Martin, a 21-year-old business school student. People are not ready and are shocked to see 12,000 geeks coming to such an event. But when they will see the images, they will understand that it is close to football. »

As at the stadium, a ceremony cannot take place without its master. And for this second Karmine Corp Experience – the first KCX brought together 3,500 supporters at the Palais des Congrès in Paris in July 2021 – streamer Doigby, dressed in a blue suit, officiates. “It’s historic what we are experiencing tonight, e-sport is going to another level thanks to the KCorp! shouts the Twitch star, also a musical artist.

Historic because for the first time in France, a public fully committed to the cause of its team meets to attend regular season matches of “Valorant”, and especially of “League of Legends” (LOL), the highlight of the show . If the FPS game was still only the aperitif, disappointing from a sporting point of view with a 12-3 defeat for the locals, it was the LOL game that made these young supporters move, mostly men in their twenties, and connect 130,000 people on Kameto’s chat.

The crowd hysterical at the arrival of Rekkles, the “Messi” of LOL

“Generally, I prefer small rooms because, when the players come, they are more determined, but there we feel a different energy”, remarks Lilian, youtuber who came specially from Montpellier to attend this evening event. An energy that is literally transmitted by the vibrations of the room, so much the decibels rise at the time of the presentation of the LOL teams.

To warm up an audience a little more, which never misses an opportunity to give voice and wave huge flags, the KCX2 honors the Fête de la Musique. Rappers Green Montana, Kekra and of course the host of the evening, Prime, are invited for a musical show between the parts of the two video games. The fellowship is perfect. Fans gather on stage to cover Prime’s anthem: “Kelawin”.

“Que la win”, only the victory, this is what the Blue Wall is impatiently waiting for, which materializes at the entrance of the players by a wall of blue signs raised in the air. A wave later, the Accor Arena became totally hysterical when Cabochard, Saken and especially Rekkles, considered the “Messi” of LOL, split the crowd to their computer.

Concentrated during the most tense passages, the Blue Wall rises like a single man with each kill of the Karmine. Unfortunately for the fans, the evening will end in a loss against Misfits, as part of the regular season of LFL, the French league. But the scale of the event goes beyond the purely sporting framework.

“Since playing video games, I have never seen such a strong community behind a single team,” says Miloria, 21. This educational assistant for students with disabilities had even taken a day off to fulfill her role as an ultra. “This evening will remain a big French step in e-sport,” she is convinced. A postulate shared by Martin for whom, like many supporters of his team, the important thing is not so much in the performance of the evening as in “the love of the shirt”.