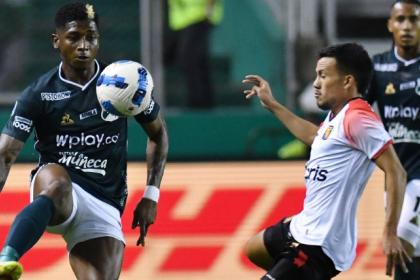 Deportivo Cali tied 0-0 against Melgar from Peru for the first leg of the round of 16 of the 2022 Copa Sudamericana, at the Cali stadium in Palmaseca. In a commitment that the Inca team dominated for much of the first half, generating the best options against a Cali that had very little brilliance and ended with two players sent off at the end of the match.

In the first moments of the initial stage, the visiting team was the one that managed the speed of the game with a good possession of the ball and taking advantage of the sides, to be able to approach the goal defended by Guillermo De Amores; while the Caleños tried to get comfortable on the field of play, to later manage to advance.

Before the 10 minutes of play, the sugar producers managed to breathe a little with incursions into the attack, getting options from set pieces, but without much effectiveness due to the good positioning on the defensive side of those led by Argentine coach Néstor Lorenzo.

Cali was getting out of that pressure at times, consolidating the defense a little more and getting closer to the rival goal, but Melgar returned to the attack and generated the clearest with a center by Cristian Bordacahar from the right side and Martín Pérez could not make it happen.

In the final minutes of the first half, the game did not change in dynamics and Melgar was the one who best controlled the game, generating much more danger with a good touch of the ball, having several occasions through the still ball.

In the first moments of the second half, those led by Dudamel had the first shot on goal after a risk charge, which Ángelo Rodríguez finished with a shot and goalkeeper Carlos Cáceda controlled without problem. For their part, the Peruvians made the first change with Kevin Quevedo replacing Martín Pérez.

The commitment was encouraged and with it, Cali managed to keep the ball at their feet more, arriving with danger and putting the Arequipa team in real trouble. They also had the entry of Enrique Camargo and Christian Mafla and Carlos Robles and Harol Santiago Mosquera withdrew; where Kevin Velasco took his natural position and Mafla his usual place as left back.

At minute 59, Melgar had the clearest chance after a mistake in defense by Guillermo Burdisso that was not discussed with De Amores, Luis Iberico won the position and in a favorable place to score with the goal alone, the ball hit the vertical and then exit the finish line.

The Verdiblancos continued to insist on the attack, but without much effectiveness in the final meters of the field, unable to leave the attackers in front of the goal. During the visit they were more focused on protecting their goal and having quick transitions in attack, getting a fairly clear option with Bordacahar at 71 minutes.

In the end, the sugar producers were left with 10 men due to the expulsion of Carlos Lucumí, who had a few minutes on the field of play, disputed a divided ball, hit the rival and the referee Mario Diaz De Vivar from Paraguay after Carlos’ VAR call Benítez from Paraguay, took the youth squad out of the match and two minutes later Daniel Luna for an elbow to Ibérico, with which minutes later the game ended 0-0.

The second leg of the round of 16 of the Copa Sudamericana 2022, between Deportivo Cali and Melgar, will be next Wednesday, July 6 at 7:30 p.m. at the UNSA Monumental stadium.