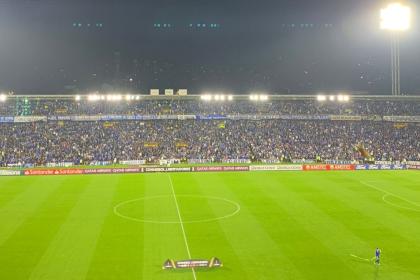 Millonarios and Atlético Nacional face each other in a new classic that will decide many aspects in Group A. Junior, who beat Atlético Bucaramanga, heated things up even more in this final home run. Given that each team is playing something more than important on these final dates, Dimayor had made a hasty decision.

The rumor spread that the Major Division of Colombian Soccer did not want to have problems between the localities of the Nemesio Camacho El Campín Stadium, and for this reason, they had sanctioned three stands for what happened in the sports venue against Junior. However, the decision could bring excesses in a completely blue stadium that was filled with expectation once the tickets were issued, quickly running out.

Through a statement, they realized in Dimayor that the decision could only have consequences between the two fans who met in El Campín, and they decided to give back entry to the public who bought their ticket quickly to live a show in a completely blue sports arena. In this way, they postponed the sanction of the stands for the next match.

The decision was notified prior to the start of the match, since the start of the game was delayed for fifteen more minutes. The police officers were also notified, and they themselves recommended that those who bought their tickets in advance be authorized again to enter the public.

Finally, they maintained that, likewise, from the DIMAYOR, hand in hand with the disciplinary authorities, the case will be evaluated so that the Millonarios FC club can comply with the respective suspension. However, the decision of the disciplinary commission was to resign, explaining that they feel that Dimayor ignored the ruling on the sanction of the ambassador.

This sanction to Millonarios stated that, ‘he was sanctioned with two (2) dates of partial suspension of the plaza, western, lower north, western lower south and western lower central stands and a fine of ten million pesos ($10,000,000) for incurring in the infraction contained in numerals 1,4, 5 and 6 of article 84 of the FCF CDU, in the match played for the fourth date of the home runs of the BetPlay Dimayor I 2022 League, against Club Deportivo Popular Junior FCSA’ .

A decision that has no turning back, since Millonarios filed an appeal for reconsideration, and the Committees denied it. However, Dimayor hastened to ignore issues of the sanction and decided to give admission to the public. This was not tolerated by the disciplinary commission of the tournament and the FCF and therefore the irrevocable resignation was given, according to information from journalists.

ATTENTION: The disciplinary commissions of the championship and the FCF have just submitted an irrevocable resignation. They argue that the @Dimayor disregarded the ruling on the sanction to @MillosFCoficial