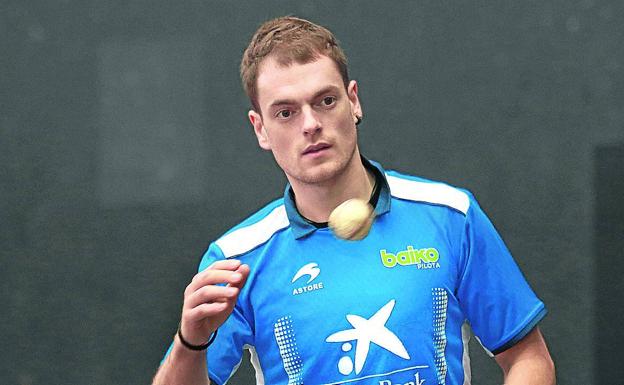 Unai Laso will decide on Tuesday whether to play the Manomanista semifinal. / juantxo lusa

As the days go by, the Manomanista is a roller coaster of sensations. If on Thursday it was known that the left foot of Altuna III was in a position to play the decisive match of the quarterfinals league against Zabaleta today (5:15 p.m.) at the Atano III fronton, yesterday it was learned that Laso suffers a muscle injury in his arm right and will decide on Tuesday whether to play the semifinals.

The Navarrese striker went last Tuesday to the selection of material for the game that was scheduled for Friday against Rezusta in Baños del Río Tobía, but in the afternoon the alarms went off because the sole judge of the Liga de Empresa de Pelota a Mano ( LEP.M) issued a resolution specifying that, due to shoulder problems, it was suspending the match and giving victory to the defender from Bergara (22-0). For the one from Bizkarreta-Gerendiain it did not entail any qualifying damage because, after winning the first two games of the league, they finished first in the group.

The pelotari went to the specialist on Thursday morning to perform different tests and see where the discomfort he was dragging came from. The result showed that he suffers “a grade one musculotendinous injury in the biceps brachii.” His fibers are touched, so he has started a physiotherapy and electrotherapy treatment against the clock to try to get to the next meeting.

On Tuesday he will carry out a test, it is still unknown where, to gauge if the discomfort has subsided and he will decide if he faces the match against the winner of the match between Altuna III and Zabaleta. In the event that he decided to suspend it, he would be out of the competition and the third-placed team in his group would enter the next round, according to the regulations.

The owner of this plaza will be announced tomorrow (5:00 p.m.) at the Bizkaia fronton. Artola faces Jaka in what, a priori, is an all or nothing duel because whoever wins will finish second and will have a guaranteed pass. The other will have to wait for Laso’s decision, which at the moment sows doubts.