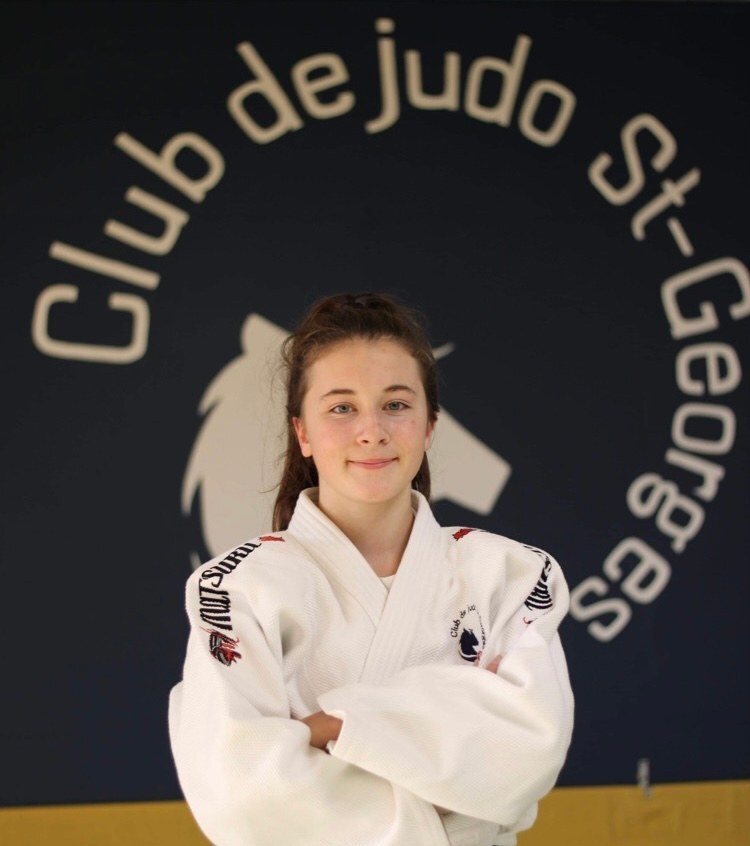 The reserved and calm demeanor of Charline Bourque, originally from St-Alfred, is deceptive. This 14-year-old girl already has quite an impressive track record.

Since the return of competitions this year, Charline’s presence on the tatami has been noticed by Judo Quebec’s Excellence Department. Her assured and explosive techniques allowed her to carve out a place for herself on the Qc team, thus becoming, at 14, the youngest judoka member of the provincial team, and the first Beauceronne to be selected there.

Crowned provincial champion on April 3, Charline flew west with the Quebec delegation to participate in the Pacific International Judo Tournament (April 17) and the Edmonton International Judo Championship (April 24) where she confirmed her talent by going undefeated in the U16s to win gold in both places. These high-calibre tournaments each brought together nearly 1,000 participants from all over the world. She also made an impressive showing against the U18s, older and more experienced athletes than her, where she won bronze in British Columbia and finished just off the podium in Alberta. Her next sporting goal is to officially win the title of “Canadian Champion” at the Canadian Championships to be held in Montreal from May 18 to 22!

Thus, the Laurent Duvernay-Tardif Foundation and the Quebec Foundation for Athlete Excellence rewarded Charline’s athletic performance on April 26 by awarding her a $1,500 scholarship. She is therefore one of the 14 young Quebecers to receive this scholarship, all sports combined, which highlights athletic, academic and artistic excellence. His academic average of 99% in Secondary 3 (sport-studies at the Polyvalente de St-Georges) confirms that his commitment is reflected in all areas.

Achieving performance in judo is closely linked to the professionals surrounding the athlete. Martin Beaulieu, Charline’s coach since 2016 and technical director of the St-Georges judo club, says “she plays to win”. “The maxim “the important thing is to participate” has become too important in our society in the sense that it can sometimes take away the desire to perform in our athletes. I always suggest to judokas to go and play to win, and that the result will be what it will be, without judgement. When you play to win, you come out a winner, even in defeat. Charline naturally has this winning reflex,” confirms Mr. Beaulieu. Charline is also perfecting her physical preparation through weightlifting with Alfred Lachance, kinesiologist at Clinique Altitude: “It’s a privilege to supervise a rough diamond like Charline and to see her grow in her sport. She has exceptional physical and intellectual abilities, in addition to having military discipline. Overall, I can’t wait to see what the future holds! “. Charline also competed with the best Quebec weightlifters at the Provincial Weightlifting Championship on April 30 in Montreal to carve out a place among the top 10.

His nomination as “outstanding youth athlete” at the Gala d’excellence de judo Québec which will take place in June is therefore fully justified! Charline will also have the chance to improve her training in Brazil this summer and participate in the biggest tournament in the country. In short, a single crossing of her gaze, during the first “hajime”, and it is easy to see that this young girl with many talents thrives on challenges and has many other beautiful surprises in store for us!