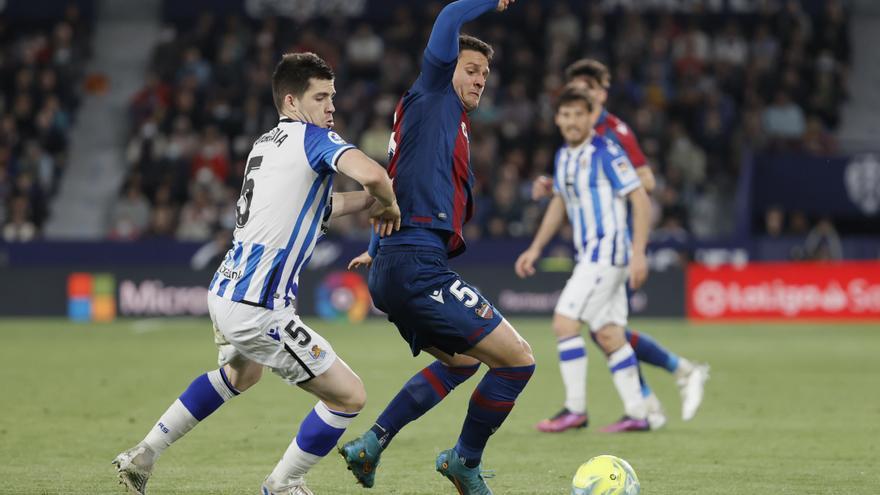 A penalty converted by Melero in the 89th minute maintains the dream of the permanence of the Levante after a vibrant duel against Real Sociedad (2-1) plagued with scoring chances and in which the San Sebastian team sent three balls to the posts.

The first half ended goallessbut he deserved more than one with balls from Real to the woodwork and opportunities from the local Morales disrupted by Remiro.

The second half was more electric, with the three goals and Rico’s penalty against Roger that put the local team ahead when there was hardly any time left for Real to react. The first half was already intense, especially due to the many scoring chances that were generated in a duel in which the visiting team handled the ball more and the local team sought to gain an advantage on the counterattack.

The first few minutes were level in terms of ball possession and approachesbut from the middle of the initial period, Real Sociedad began to control the game.

By then Cárdenas had already disrupted a good play by Isak (m.15), but it was from that moment on that the long possession of the ball by the San Sebastian team began to allow their men to get very close to Cárdenas’ goal, although without find the right finish.

The best chance for Real was a shot by Isak to the crossbar in the 33rd minute, to which Morales replied in minute 36 with a shot that Remiro successfully stopped. There was even more emotion with a ball that Son neutralized when he was on his way to the goal and another shot by Morales to which the Real goalkeeper replied again.

It did not seem logical with what had happened that the score had not moved at halftime, something that did happen shortly after the start of the second half.

It was not on the counterattack, but on an elaborate play by the local team that Jorge Miramón culminated with a cross shot that Remiro could not stop and that allowed the Levantenists to maintain the dream they pursue.

La Real had not taken advantage of their chances in the first period and found themselves with a different script than expected. It was his turn to redouble efforts against a rival grown by the goal, although focused on defending it.

From that moment on, the territorial dominance of La Real intensified, although with its players too static in attack against a Levante that was crouched in search of points based on defending and trusting that Morales would be successful in some against.

Cárdenas’ attack on the net found a reward after Isak’s second shot off the crossbar, as Silva made it 1-1 with a header in the immediate play.

The equalizer put the game where it was convenient for no one, but momentarily it was better news for Real than for Levante. It was time to seek a necessary victory without neglecting the point achieved up to that moment.

In the final stretch of the match, emotion and intensity prevailed over the game, with a goal disallowed for the locals for offside and an opportunity wasted by Silva for the visitors.

The key play of the match came in the 89th minute with Rico’s penalty on Roger which Melero transformed into the goal of hope for his team and the feeling of a missed opportunity for the visitors.

Incidences: match of the 35th day of the League played at the Ciutat de València stadium.