Iga Swiatek reached the final in Rome, reaches unforeseen numbers and can still do more: “There is no ceiling” 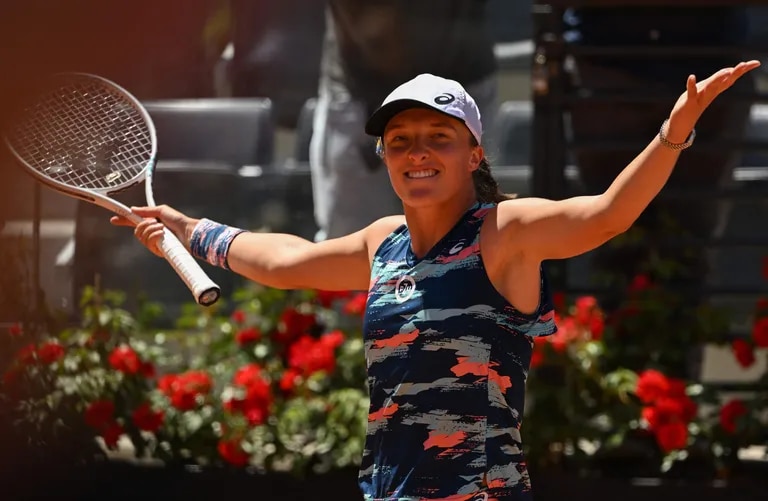 Since Serena Williams seven years ago, no woman had had such a winning streak: the number one in the WTA ranking, the Polish Iga Swiatek defeated Belarusian Aryna Sabalenka 6-2, 6-1 on Saturday to add 27 consecutive wins and advance to the final of the Italian Open. Williams had won the same number of matches in 2014 and 2015.

“I constantly surprise myself that I can play better and better,” Swiatek said. “I feel that now I can believe that there is no ceiling. That’s the best”. Defending his title in Rome and seeking her fifth straight tournament, Swiatek dominated No.8 Sabalenka with a mix of power, persistence and skill. Although he struggled with his serve at times, Swiatek had forehand and backhand winners over the slow red clay terrain of the Foro Italico. The Pole had a delicate semi-volley backhand in the last game of the first set.

Swiatek had the same number of winners and unforced errors, while Sabalenka had eight winners and a whopping 31 unforced errors. “Today I felt like I truly understood clay”Swiatek said. Sabalenka requested a medical timeout in the second set to receive treatment on her back.

Swiatek, the surprise 2020 French Open champion when she was ranked No.54, will be the favorite to win her second title at Roland Garros. The second Grand Slam tournament of the year starts next weekend. Swiatek’s rival in the Italian final on Sunday will be the Tunisian Ons Jabeur (7th in the world), who had to fight hard and save a match point against Russia’s Daria Kasatkina (23rd), before winning 6-4, 1-6, 7-5 in almost two hours.

Swiatek’s season has more than just a winning streak. With more than half to go, he has won as many matches this year (36) as he has in all of 2021. She is the seventh player to reach the Rome final twice before turning 21. The previous ones were Chris Evert, Martina Navratilova, Gabriela Sabatini, Monica Seles, Martina Hingis and Venus Williams.

Neapolitan hauliers attacked in Turin while unloading fruit and vegetables

Windhorst reacts to Gegenbauer allegations: “Kicking is not our style” – Sport