“If you have confidence, you take the pressure off and you get to everything” 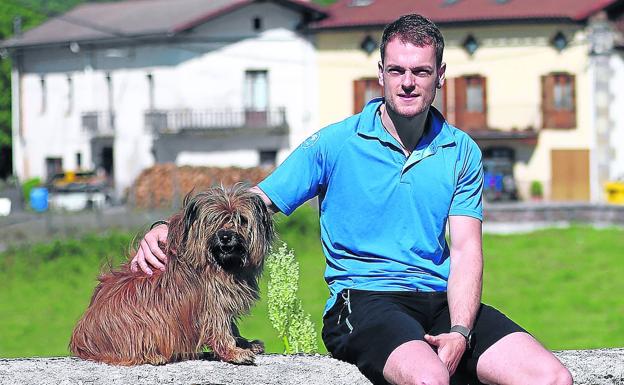 Unai Laso disputes his third consecutive final on Sunday which has opened the doors to a new contract: “I’ve earned it”

The life of Unai Laso (Bizkarreta-Gerendiain, 1997) has changed radically in one season. Last year at this point he was playing a preview of the Irurzun amateur baseball tournament because as he was out of professionalism he asked its organizers to play it. On Sunday he will be in the Manomanista final, the biggest baseball championship, at the fronton of the Navarra Arena multipurpose space in front of 3,000 spectators. The forward has not wasted time. It will be his third top match of the campaign in an official competition. In the previous two he was one step away from glory, and this time he will start as a favorite against Ezkurdia. “It is the most important and wearing red all year would be nice. But I take it like the previous ones. I am very happy to have come this far.”

His candidacy definitively ratifies his explosion within the professional hand. At 25 years old, he has earned the stripes in the Baiko squad because of his game and because of the calling power he has. In fact, his contract ends in 2023 but the operator has already contacted him for a renewal. «We have had a first meeting in which they recognized the merit I had and said that we would talk again. I think we’ll make a new one soon. In that aspect I am calm because I know I am doing things well. He will improve the financial benefits of it. “I’ve already earned that. I am the one who is training every day and I deserve it.

Now all he has to do is put the icing on his new status with a title. He has it in his hand to put an end to the drought that his promoter is going through in this regard. 365 days later, she has gone from nothing to being on everyone’s lips. Everything has been very fast, like her game. Even the Navarrese has been surprised at the speed at which he has achieved it. “Of course it’s surprising. But if things are going well for you, it’s for a reason. If you have confidence you take the pressure off and you get to everything.

Winning the champion Altuna III in the semifinals for the first time has also been an impressive morale boost for the fight for the txapela. “I’m proud of how I got it. I knew how to keep calm and I was convinced until the end that I could take the game forward, and it went well.

What he didn’t like so much was having only this week to prepare for the match against Ezkurdia on the pitch for the final. Playing in a multipurpose space that hosts other types of activities is what it has. He hadn’t been back to it for four years when he played a third match at the Masters final festival, and he can’t remember what it was like. You will have to refresh your sensations at a forced pace. You’ll just do one hard workout and one lighter workout. “I find it disrespectful.”

Nor does it seem correct that the pelotaris have only been given 160 tickets for their commitments ahead of the summit clash, “because we are the ones who take the people.” He has many requests, especially from fans who have attended his games throughout the championship. “I can’t leave my crew out, but I can’t make them pay 122 euros either. Many study or are unemployed, and it is a very big effort for them. But since the companies take out the cheapest ones when they put them up for sale well in advance, how do I manage it? », he questions.

He has never faced Arbizu’s hand in hand. The two individual matches that he has played have been in the ‘cage’ and they do not help him to draw conclusions because the modality “is completely different”. In the semifinal that Ezkurdia played against Jaka, he verified that his rival is “very fresh”. “It is a beast. He has a lot of strength. He will have to hit a lot of balls because, even if you try to put the ball far, he has a great volley to defend and attack, and with his left foot he gives him a lot. Besides, he is serving very well, and I will have to hang on with the rest».