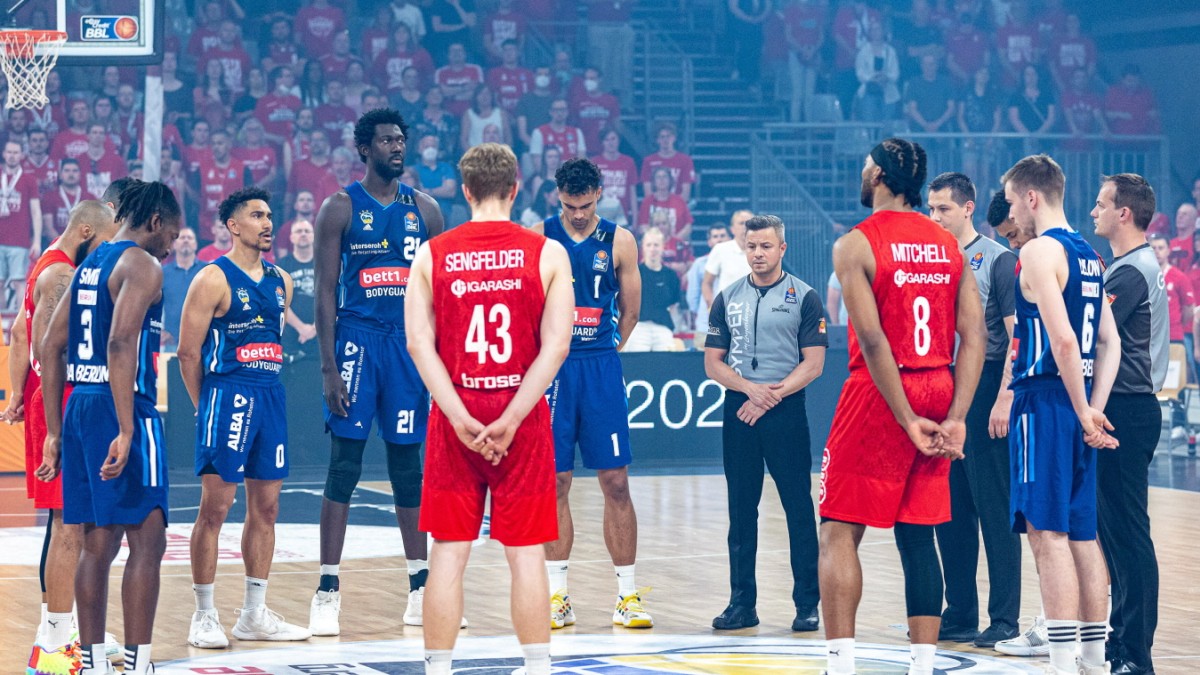 On Friday night, the past was a guest in Freak City. Fast ball relays, safe distance throws, crashing dunks – basketball worth seeing. All of this was demonstrated by the guests from Alba Berlin, reminiscent a bit of the heyday of Bamberg’s basketball players, when they shot opponents in the Bundesliga out of the Brose Arena one after the other with their fast and attractive game. That was five years ago, then the champion team scattered to the winds, the players said goodbye to top European clubs or straight to the NBA. Eight years of sometimes overwhelming dominance came to an abrupt end, and since then the club has been trying to build on old successes. With manageable success.

Even the current team didn’t have much to oppose the speed basketball of the German champions. Sometimes the hosts were demoted to extras in the 70:103 home defeat in the third and last playoff quarterfinal game. Only during the minute’s silence for the deceased Ademola Okulaja did the opponents meet at eye level. From 2007 to 2009, Bamberg was the last stop for the Berliner, who was champion with Alba and, as DBB captain, one of the defining figures in German basketball.

Led by playmaker Maodo Lo, whose tricks were even applauded by the Bamberg fans (once he played the ball through his opponent’s legs during a counterattack), the champions were already unassailable at the break with 61:36 points. The guests impressed with great unity at a high level, seven players scored double digits. Above all, their accuracy impressed: Almost 60 percent successful three-pointers is an exorbitant value.

Coach Johan Roijakkers put together the squad before he was sacked. Now successor Oren Amiel is to build a new team

The reaction of the spectators was remarkable. In Berlin Brose had lost 89:114 and 85:97, now the Bamberg players were given standing ovations by 4017 spectators after the dismantling in their own hall. On the one hand, that had something to do with the expectation of this elimination – Bamberg had just reached the playoffs as the eighth and last team, Primus Berlin has been in brilliant shape for weeks. On the other hand, the positive reaction of the Bamberg audience, who are considered spoiled not least because of the great past, was an expression of the most recent development. The season will go down in club history as a mess, coach Johan Roijakkers was fired at the end of November and successor Oren Amiel also needed some time to get the squad on track. In recent weeks, however, the Israeli has been able to do this with growing success. Nine wins from the last eleven games and a place in the knockout stages spoke for the 50-year-old.

Amiel’s contract has been extended until 2024. He can now build a squad according to his ideas around captain Christian Sengfelder, who has signed until 2025. However, not with the extensive competencies of his predecessor Roijakkers, as Managing Director Philipp Galewski emphasizes. Brose had largely given the Dutchman a free hand, a model with which Roijakkers had made a name for itself at BG Göttingen – but which did not work in the traditional location of Bamberg. A mistake, as Galewski admits. A new assistant, close to the management, will be assigned to Amiel, who will be involved in squad planning together with Stefan Weissenböck, who is responsible for player development and has an excellent network. The sporting concept is then “brought into economic harmony” with the club managers, explains Galewski, so in future the squad will be thought up in teamwork – “no longer by a single person”.

Of course, Amiel will set the direction. According to Galewski, the German players have priority. Apart from Sengfelder, only Marvin Omuvwie has a valid working paper. However, Brose will endeavor to extend the contract with identification figures such as Patrick Heckmann, who was injured for a long time, and Kenneth Ogbe, both national players. The newly signed Czech Tomas Kyzlink also has good chances, although extensive changes are to be expected, especially in the foreign positions. Galewski does not want to reveal any details so soon after the end of the season, but half of the squad will probably be replaced. It is questionable whether players like director Justin Robinson, center Akil Mitchell or winger Omar Prewitt will remain.

“The most important thing now is to make the best of the opportunities and create your own identity,” says Galewski – he lacked the latter compared to before. “Brose only stands for its great fans, nothing else.” The continuity that was always striven for and recently never achieved should help. Berlin gives an example: “They’re a really strong team that has been working together for years, I think they’ll be champions.”

That remains the goal for the coming season. Captain Sengfelder recently put it aptly when he said he wanted to play for home advantage in the playoffs in the future, i.e. to finish in the top four. Galewski agrees, because: “Nothing is as sexy as success.”