Which is the strongest “Microsoft Edge” feature? –Tournament is being held on Twitter–Yajiuma no Mori 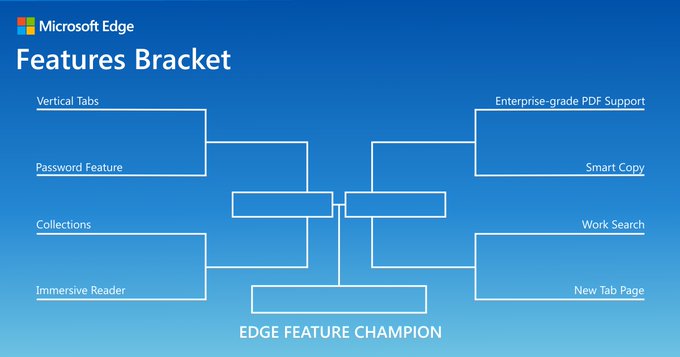 In “Yajiuma no Mori”, we will tell you a wide range of topics that are not particular about news reviews.

Which is the strongest “Microsoft Edge” feature? –Tournament is being held on Twitter

Which is your favorite “Microsoft Edge” feature! ?? –Microsoft is holding a tournament on “Twitter”. It seems that the event was inspired by the excitement of the NCAA (National Collegiate Athletic Association) basketball tournament, but is it something like “Spring Senbatsu” in Japan?

The month of brackets may be coming to an end, but we’re keeping the fun going. We are celebrating some of the most popular Microsoft Edge features and starting tomorrow you can vote for your favorites 🏆pic.twitter.com/YFIpIKt7Zn

The company had previously held a tournament “#ClashOfTheKeyCombos” that decides the No. 1 shortcut key for Windows 10, but it is the “Edge” version of it.

By the way, it was the[Ctrl]+[C]keys (copying the selected content to the clipboard) that won this tournament. The runner-up is the[Alt]+[Tab]keys (switching tasks).

The “Edge” functions entered this time are as follows. Since it also has functions for corporations, there are some that are a little far from general users, but it is still a lineup that makes it difficult to choose.

Voting will be held sequentially from tomorrow, and the first match is scheduled to be a confrontation between the “vertical tab” and the “password function”. Which “Edge” feature do you like?