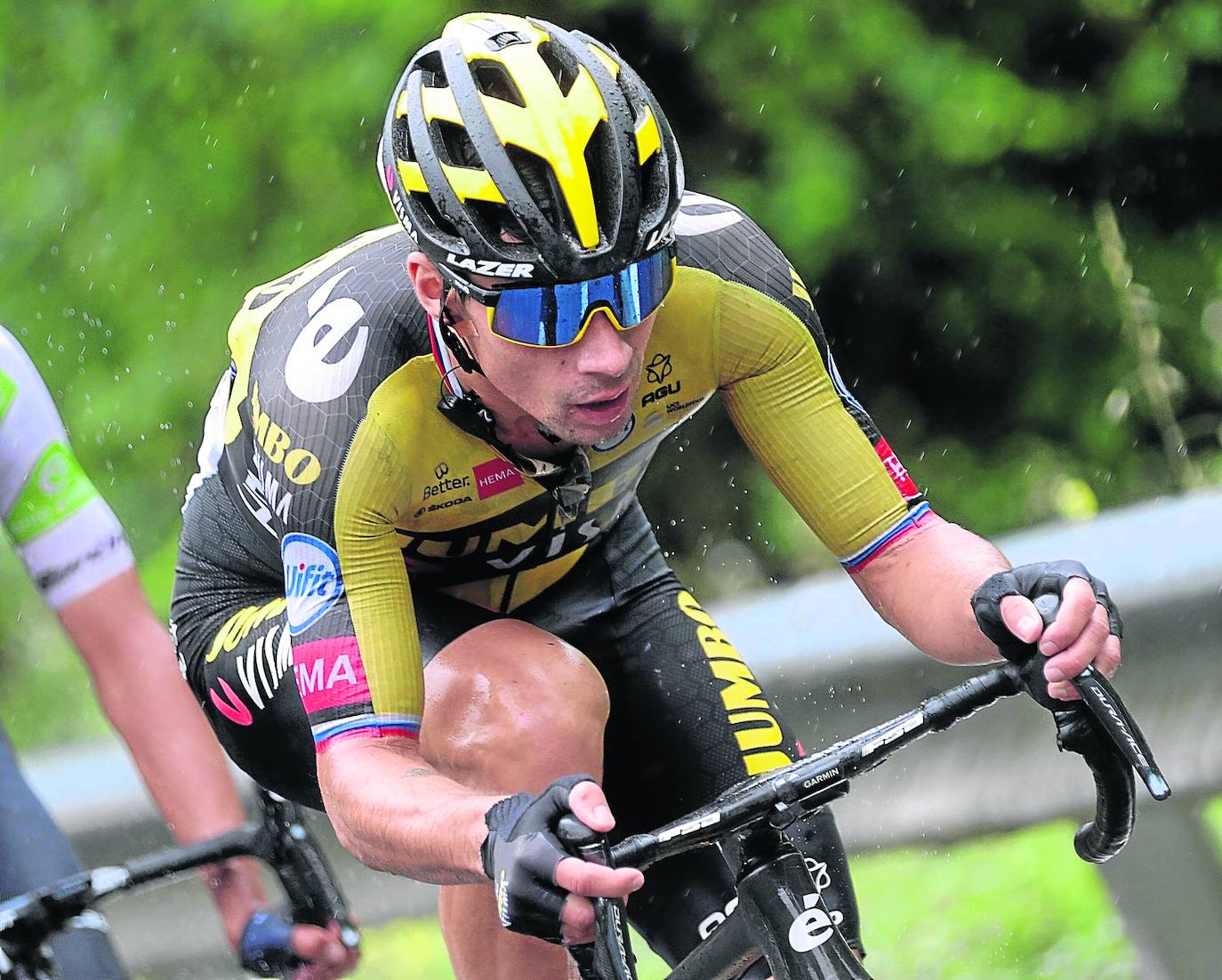 Big favourite. Starting today in Hondarribia, Roglic is looking for his third victory in Itzulia. / ef

The Slovenian was uncovered in this race in 2017 and is looking for his third victory today against Evenepoel, Mas, Bilbao, Izagirre, Bora and Ineos

As reflected on social networks, the cyclists who were riding around Hondarribia yesterday ran into, among others, Primoz Roglic, Jonas Vingegaard and Sepp Kuss, all three from the Jumbo team. They were calm, relaxed. On the eve of the first battle today, enjoying this Itzulia that they have come to conquer for the third time. “When I see an opportunity, I go for it with everything,” Roglic sentenced a year ago, just after winning the last edition. Hunter phrase. Of those who do not waste bullets. And less in his private preserve. That is the Basque round for the Slovenian runner, who runs here as in his house.

He stepped on Itzulia for the first time in 2017. Primoz was not yet the current Roglic. He was hardly a peculiar bib number, a former ski jumper who had won a Giro 2016 time trial. But in the Basque round he made his big leap: he won two stages, in Bilbao and the Eibar time trial. He finished fifth overall after succumbing to Contador and Valverde, but he had tasted blood and left with a fixed idea: to return to collect a race tailored to him. He did it in 2018. his first win. He was not in 2019 and the pandemic crossed out the race on the calendar in 2020. The Slovenian returned last year and against Pogacar, his executioner on the Tour, he won again. Starting today in the initial Hondarribia time trial, the opportunity to add his third victory opens up. That would tie him with Sean Kelly and Tony Rominger, and bring him closer to the only two runners with four notches, José Antonio González Linares and Alberto Contador.

In the absence of Pogacar, Roglic is the big favorite. He has a good version of the Jumbo team at his service, with Jonas Vingegaard bringing up the rear. The young Dane, who in 2021 was second in both the Itzulia and the Tour, is more than capable of being the other asset of the Dutch block. The two also have the support of one of the best climbers in the world, Sepp Kuss, who has spent days in Bilbao studying the route.

Roglic, today’s favorite along with Remco Evenepoel and Pello Bilbao in the 7.5 complicated kilometers of the Hondarribia time trial, will be challenged by two teams loaded with bullets. Ineos brings Adam Yates, Daniel Martínez, Tao Geoghegan Hart, Thomas and the young Carlos Rodríguez. Bora is presented with Sergio Higuita, winner of the Volta, Buchmann and the Russian Vlasov, another clear contender for the final podium in Arrate. Both in the Volta and in Paris-Nice (where Roglic won) attack cycling has been the norm. And it is usually the shortest way to break the bank and flip the odds.

The rest of the teams have less range of leaders. The Quick Step trusts Evenepoel, who will go for the victory in the Hondarribia ‘time trial’ and who has just done some frightening power tests. At his side, the double world champion Alaphilippe will try to reap victories in the stages that end on a steep slope. And they are several.

“Itzulia is a small Tour”, defines Roberto Laiseka, technical director of the race. After the time trial in Hondarribia, the race will return to Navarra with a second stage between Leitza and the finish line on the Viana slope, where in 2010 Alejandro Valverde beat Óscar Freire in the sprint. The third day will go from Llodio to Amurrio -another uphill finish- along an ideal route for ambushes. With ports like Opellora, Ozeka, Garate… «It is difficult to control terrain and with some sections at 20%». The fourth stage, between Vitoria and Zamudio, will climb through Jata and Urruztimendi and will have its hot spot on a new slope of the Vivero, with ramps of around 20%, before going to the finish line in the Zamudio Technology Park.

Always in shape, he has won the last Paris-Nice.

He reaches one of his big goals.

The young Belgian aspires to be the first leader.

Favorite in the goals that end in a slope.

Second in 2021 in Itzulia and the Tour, he is going for everything.

The fifth chapter will move from there to Mallabia. The profile includes the ports of Morga, Paresi, Bedarona, Gontzagarai, Trabakua and Karabieta, before reaching Kalbario Street, where the finish line awaits at a wall of 18%. The resolution of the race will be reserved for the final day, on Saturday the 9th, between Eibar and Arrate. Concentration of climbs until reaching the Eibar sanctuary where Roglic celebrated his second victory in 2021.

His list of rivals is long. It also includes Pello Bilbao. Fifth in the Strade Bianche, the twisty and technical Itzulia fits him like a glove. Like the Hondarribia time trial, where strength will share weight with skill and precision in the effort. Enric Mas, on his way to the Tour, has already shown that he is at a high level. Ion Izagirre, winner of the Basque round in 2019, has this test in his sights. There are more: Michael Woods, Rigoberto Urán, David Gaudu…

Itzulia also allows us to check the growth of the second category teams. Euskaltel-Euskadi, at home, will seek prominence with Azparren, Martín and Bizkarra. Kern Pharma enjoys Igor Arrieta, a 19-year-old boy who surprises every day. Burgos BH has former triathlete Okamika and climber Pelayo Sánchez. And Caja Rural, which is still licking the wound of its exclusion from the next Vuelta a España, will try to redeem itself with Aular, Barceló and Lastra. Everyone competes from today in the Basque house of Roglic.

Despite the rain, Hondarribia boasted of its beauty in the presentation of teams from this Itzulia. The protagonists paraded yesterday by the microphones of the organization. The most requested was Primoz Roglic, who signed autographs and allowed herself to be photographed with the public. “It’s a pleasure to be back here again, with this great cycling hobby,” stressed the Slovenian. He did not hide his objective: «I come to give my best. The goal is to achieve victory. Roglic will be the last to start today in the 7.5-kilometre time trial. He will do so at 5:20 p.m.

Two minutes before Pello Bilbao will have left, convinced that his form allows him to aspire to fight “for stage wins and for a place on the podium.” Enric Mas, who comes to “enjoy” a race with an “incredible atmosphere”, wants to repeat the victory like the one he achieved in Arrate in 2018. He will start the ‘time trial at 5:10 p.m., two minutes before Remco Evenepoel, another cyclist who has a good memory of Euskadi, “of the victory in the Clásica de San Sebastián”. Ion Izagirre, who was with the best on Saturday in Estella, has preferred to compete earlier, at 3:45 p.m.