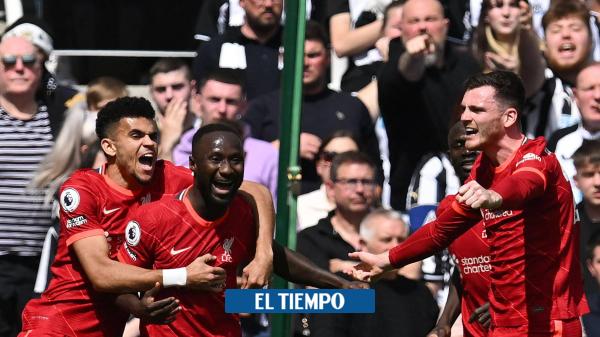 The Colombian Luis Díaz played the entire game in Liverpool’s 0-1 win over Newcastle, important match for the Premier League standings.

The only score of the game occurred in the 19th minute through Naby Keita, who took advantage of a good individual play to score.

It may interest you: (Santa Fe plays its last card to think about the classification)

As usual, Díaz was important, the player who moved the most forward. The victory leaves Liverpool as leader, but waiting for the match between the Lees and Manchester City.

The great figure of the match was the local goalkeeper, Martin Dúbravka, who avoided the visitor’s goal cry on at least four occasions.

Pending another presence at La Cerámica in the Champions League final, Jürgen Klopp reserved the group that is the backbone of his game (Alexander-Arnold, Thiago and Salah) and the play did not go wrong in a difficult start, St James Park, and against a team on the rise, which had won its last four games.

Despite the doubts that Klopp’s bet could generate, renewed until 2026 this week, Liverpool were only really pressed in the opening quarter of an hour when Newcastle pressed high and, encouraged by his public, he seemed to find a way to overcome the ‘reds’.

Nevertheless, Naby Keita’s goal, assisted by Diogo Jota (m.19) ended that illusion and, despite the fact that the locals had a goal from Paraguayan Miguel Almirón annulled for offside, Klopp’s team was not overly challenged and reached the break with overwhelming possession (70 percent).

In a second time, despite the fact that Newcastle tried to control the game more, the best chances were for Liverpool, who were able to increase the score, especially with a clear opportunity wasted by Sadio Mané. Klopp brought on Salah and Thiago in the final stretch and secured a victory with which to put all the pressure on Guardiola’s City.

It may interest you: (Cristiano Ronaldo and an image that goes around the world)