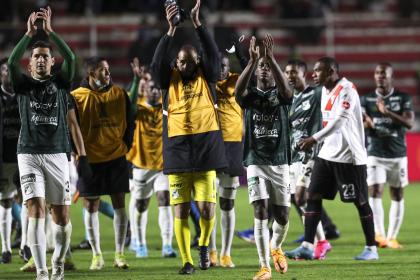 The Conmebol published this Friday the ideal team of the week in the Conmebol Libertadores 2022, where the presence of two players who were protagonists with Deportes Tolima and Deportivo Cali stands out, scoring decisive goals to add on the visit.

Anderson Silver reported with two goals in the win (2-3) on the visit against América MG, while the defender Guillermo Burdissofrom Deportivo Cali, scored the equalizer (2-2) in La Paz against Always Ready and repeats recognition.

The Argentine center-back who had been included in the featured team on date 1 in the Libertadores, after a great match against Boca Juniors who scored in the 2-0 win, was recognized again after converting the equalizing goal 2-2 against the Bolivian Always Ready, in La Paz.

With this result on date 3, Rafael Dudamel’s team reached 4 units and remains in contention for passage to the round of 16 of the continental tournament. They are second behind Corinthians who add 6 and although they share points with Always Ready they have a better goal difference.

On the sides of Deportes Tolima, the news is also positive. They achieved 3 key points to stay alive for the second leg. They are third in Group D led by Independiente del Valle and Atlético Mineiro, each with 5 points. Hernán Torres’ team is third with 4 units.