Chimaev and Burns met by chance at the hotel, Wolf gave the Brazilian friendly advice before the match 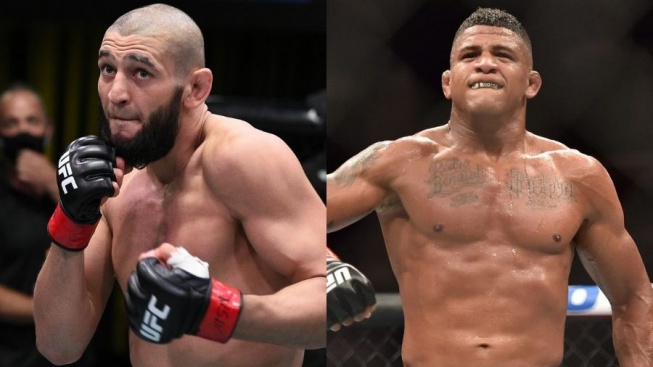 Nerves work and the fighters often boil it before the match, so the organizers try to prevent them from meeting behind the scenes if possible. But it doesn’t always work out, the random meeting of Gilbert Burns and Khamzat Chimaev (probably on the way from or to the sauna) was captured by cameras, but fortunately it was in a very friendly spirit.

“You’re small, brother. You have to eat more, eat bananas, chocolate.” Chimaev recommended to the Brazilian, who really looked significantly smaller than him. “Show me strength,” he exhorted him while shaking hands, when both opponents were probably comparing each other.

“I’ll show her on Saturday,” Burns laughed. “I hope so,” “Wolf” said goodbye to him.

The Brazilian nicknamed “Durinho” (Little Tough) has previously said that he does not see the dreaded monster in his upcoming opponent, which fans and the media make of him. On the other hand, the Chechen man almost didn’t get hit in the first 4 matches in the UFC and so far he has been in the 2nd round for the longest time. Burns should be the one to finally check him out. Gilbert himself thinks it will be easier to defeat Chimaeva now than in 2 years.

Both are very good at fighting on the ground, Gilbert is a multiple world champion in Brazilian jiu-jitsu, and Khamzat excelled in classic freestyle wrestling before entering the MMA. Strength and size should be on his side, which should put him at the top of his stance, but on the ground, Burns could threaten some submission.

We will find out on Sunday morning how the expected match will turn out. The main part of the UFC 273 tournament starts at 4:00 our time, so Chimaev and Burns will probably be around five o’clock. They will be followed by two more title duels. Petr Yan will retaliate with Aljamain Sterling in a bantam and Alexander Volkanovski will defend his throne in a penny against “Korean zombies” Chan Sung Jung.