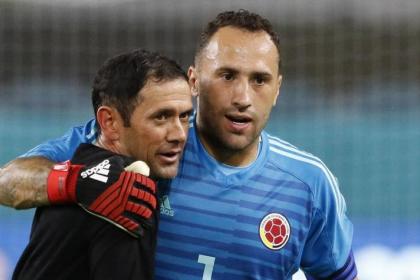 “If anyone knows all of Colombian football, it’s me,” declared Arturo Reyes after being consulted in They talk about football like this, about DirecTV Sports, about whether he would be a good candidate to lead the Colombian National Team after the departure of Reinaldo Rueda. The former Junior coach did not hesitate to say that he has all the players in his head and that directing the tricolor “is very easy.”

Reyes spoke of the possibility that the Colombian Football Federation decide for him to take over as coach of the majors, and although he acknowledged that he is after a new project, possibly with a foreign club, if they call him to lead the Colombian National Team, he will not I would doubt it. He feels qualified and does not hesitate to say that he knows many of the new figures well.

“It was a pleasant experience,” said Arturo Reyes, recalling the four games he coached in the tricolor, before the arrival of Carlos Queiroz. “What we did was bring a base of players who were in the previous World Cup and give an opportunity to some who were in our league, and others from outside, who had not worn the tricolor jersey. Broaden the spectrum so that the coach who arrived, which was Queiroz, had the chance to see those four games and get an idea”.

And he continued: “Things went well, I was simply clear that I was the coach of the U-20s and my purpose was to take this team to a World Cup, and once those four games were over, we continued with the task”.

Do you see yourself leading the senior team? Reyes mentioned that “directing the Colombian National Team is a distinction, it is the best for Colombian coaches and you cannot say no, but I think the times are not so clear to me. We are waiting to find a possibility and I hope that before the FIFA date we are on the way to some sports project”.

The former coach of Colombian youth teams and who was in charge of Junior in 2021, added: “I’m going to say something I shouldn’t say, but I’m going to dare, I’ve had the opportunity to manage great players in the senior team and I have in my head a large number of players of all ages from 1997 to 2003, and if There is someone who knows all of Colombian soccer, it is me. It’s not up to me to decide, but I’m also waiting for a possibility to be resolved that can open up and that excites me (…) It seems to me that directing these players is very easy, you have to let the soccer player be. There are some responsibilities, but honestly, it’s very easy in the national team.”

Reyes has been harshly criticized by the fans and in recent days when his name began to appear as a possibility, which Ramón Jesurún did not rule out, he said that “I try to isolate myself a bit from all these issues because I feel that the criticism at times has justified, in others not. It is not against Arturo Reyes but against the position of coach. To tell them that time gives reason to those who have it and there are the number of players that we have had the opportunity to manage in the U-19, U-20. U-23 and older.”

Precisely speaking of new calls in the tricolor, the coach mentioned a few players who in his opinion should be in the majors thinking about the next World Cup. “Colombia has always had very good players and what went from having seven games without scoring a goal is something out of the ordinary. These are moments of a difficult Qualifier like this one. That replacement that you will see started from the World Cup in Russia with (José) Pékerman has young players with the possibility of belonging to this next cycle and you have to mix it with players who are coming out and those who were in the Pre-Olympic like (Eduard) Atuesta, (Jorge) Carrascal, (Willer) Ditta, (Álvaro) Angulo. There is a good litter and a mix can be made to return to the World Cup. I have no doubt that the national team will go to the next one because we have good material, but we have to start working from now on”.

Arturo also referred to the present of Luis Díaz and the future he sees in Daniel Ruiz. “One of the great qualities that Lucho has is the ease with which he adapts. I saw him in the U-20 of Barranquilla and he did impressive things. He has not needed much time to be a starter, now he has arrived at Liverpool, which is a club that goes according to his characteristics. In that time in Porto he greatly improved his decision-making and definition. He is homeless and he is happy, he shows. He is going to continue to improve and the players he has next to him are going to make him grow. We haven’t seen the best version of Lucho yet.”

“I had Daniel (Ruiz) in the Colombian National Team (Under-20) and he is a player who has a happy football and is in full growth, he has no ceiling, and he is being well managed. He has everything to be important in the majors, I have no doubt that in a short time we will have him in international football”, he acknowledged.

Finally, the samarium coach made it clear that now his plan is to find, together with his coaching staff, a project to lead. “It hasn’t been long, it’s been four months. There are coaches who haven’t managed for a year and in Colombia everything is very competitive, coaches from abroad are also given the opportunity. There is something in international football there, but not here It’s easy. I’m in a good moment to take on a project and be a champion”.