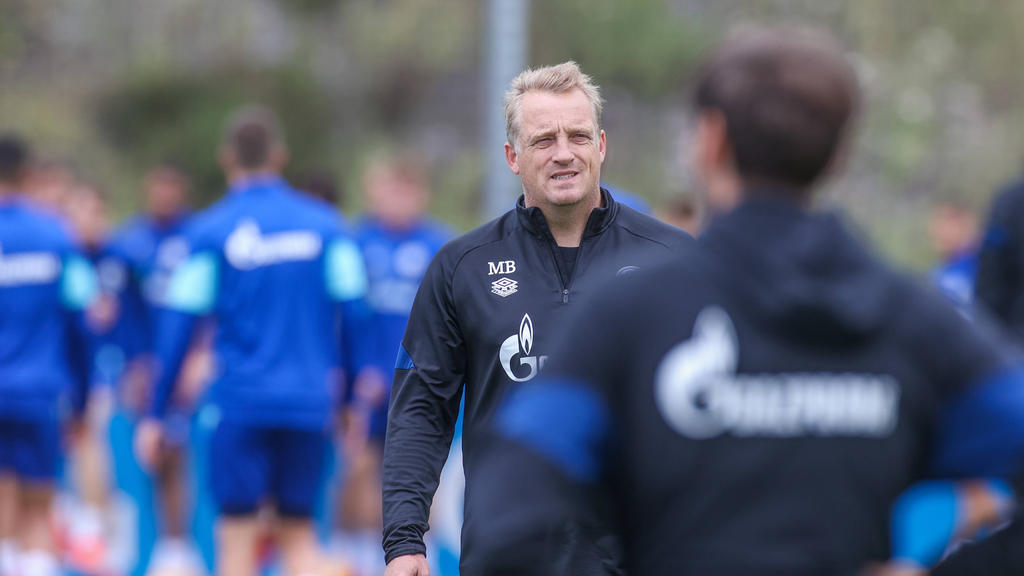 He’s doing it again: Mike Büskens is helping his FC Schalke 04 out of trouble as interim coach for the third time. In the search for a successor to the sacked Dimitrios Grammozis, the “Eurofighter” from 1997 is said to have been the ideal solution, as sports director Rouven Schröder emphasized. A questionable statement for several reasons.

Mike Büskens enjoys the greatest trust at FC Schalke 04. Hardly any other former professional of the Royal Blues is so appreciated by those responsible and so loved by the fans as the former midfield worker.

The 53-year-old stands for one of the most successful times at Schalke: in 1997 he won the UEFA Cup as a player, and in the early 2000s he twice brought the DFB Cup to Gelsenkirchen.

He then remained true to “his” S04, despite external coaching commitments in Düsseldorf, Fürth and Vienna.

However, Büskens always refused a long-term promotion to Schalke head coach, although the turbulent past few years would have presented many an opportunity.

However, Büskens had found his dream role in the background. The “Schalke Hermann Gerland” so to speak.

But after Dimitrios Grammozis was eliminated, those responsible for S04 managed to persuade Büskens to (temporarily) move to the front row again.

“It wasn’t a gut decision, it was a development process. Discussions weren’t held on an emotional but on a factual level,” sporting director Rouven Schröder tried to paint a coherent picture of the management team in a media round on Tuesday.

According to Schröder, the decision in favor of Büskens was made “with the utmost conviction”. There was no other candidate to succeed the failed Grammozis.

And so, according to Schröder’s statement, none of the previously traded and currently available coaches was contacted – not Bruno Labbadia (most recently Hertha BSC), Friedhelm Funkel (last 1. FC Köln) or Markus Gisdol (last Lok Moscow) and not Daniel Farke (last FC Krasnodar).

Instead, Schalke relies on the candidate with the greatest possible stable smell.

After the end of his career as a player, he learned the coaching profession at the Revierklub and stood on the sidelines for a few months in 2008 and 2009 as an interim solution in the Bundesliga. Büskens then moved back to the second row, as planned this time.

Its biggest advantage over an external solution is its proximity to the team. Schröder hinted that Büskens’ qualities as Grammozis assistant were wasted and that the Schalke pros can now benefit more from his know-how.

However, an immediate Büskens effect is not to be expected. Due to a corona infection, the new Schalke coach is currently in isolation, at least until the end of the current week. Assistant Matthias Kreutzer takes over the training management instead.

Schalke spread the hope that Büskens could sit on the bench at FC Ingolstadt (1:30 p.m.) on Sunday.

In view of a first week that was wasted, so to speak, the action of the Schalke bosses seems a bit questionable, because there is not much time left for the turnaround in the promotion race.

Nine games are still outstanding, six points separate Schalke from a promotion rank. Quite a few in the environment therefore criticize that Grammozis’ dismissal came too late.

Under the German-Greek in 2022, not a single winning streak went beyond two games. Schalke rarely knew how to convince in a playful way.

Convincing performances, such as the clear 5-0 win against Erzgebirge Aue, clouded the view of the obvious problems in the team, which in the second half of the season only survived a game without conceding a goal twice and acted extremely predictably in the offensive game.

The most recent 3:4 in the home game against Hansa Rostock was Grammozis’ undoing. Likewise, the meager 1: 2 against Fortuna Düsseldorf could have given cause for rethinking.

Schröder preferred to quickly postpone the discussion, which was also unflattering for him. You will “know on May 15” whether the change of coach came at the right time.

At the latest after the end of the season it will also be clear whether Mike Büsken’s ideal solution for the mission of promotion has proven itself.